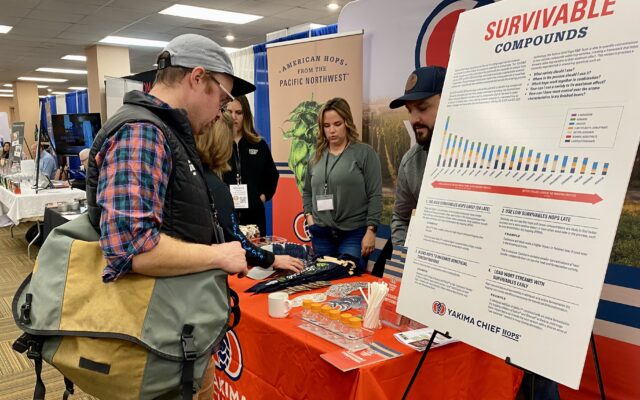 Contributed • April 6, 2022
By Lori Valigra, Bangor Daily News Staff Maine’s craft brewing industry faced tough realities during the past two years, closing taprooms early in the pandemic in favor of curbside service, fretting supply shortages and paring staff, all of which added to the stress and mental health issues among workers. Mental health is a frontburner topic across most industries, but craft brewers in Maine generally haven’t talked publicly about problems such as depression, sleeplessness and overdrinking.

Maine’s craft brewing industry faced tough realities during the past two years, closing taprooms early in the pandemic in favor of curbside service, fretting supply shortages and paring staff, all of which added to the stress and mental health issues among workers.

Mental health is a frontburner topic across most industries, but craft brewers in Maine generally haven’t talked publicly about problems such as depression, sleeplessness and overdrinking. That changed Thursday, when the New England Craft Brew Summit in Portland held a panel on supporting mental health in the craft beer industry.

“We can pretend we are OK, but almost nobody is OK,” said Meaghan Swan, a mental health worker and co-owner of Tumbledown Brewing in Farmington. “This has been brutal for everybody.”

The craft brewing industry is a major part of Maine’s economy. The state’s 165 craft brewers have raised Maine’s profile internationally for great beer, contributing $260.7 million and 2,400 jobs to the economy in 2020. Now that the breweries are on the road to recovery from pandemic effects, with 18 new breweries since early 2020, many are turning more attention to how employees have fared with the constant changes and unknowns about their future at work and at home.

The pandemic worsened the normal stresses of a small business such as responding to a batch of beer going awry, a rainy Saturday that may thwart business or not having enough staff. Business owners and brewers are learning to recognize signs that someone may be in trouble and need help. Those include lacking energy, being grumpy, sleeplessness, being more cynical, procrastinating and having trouble concentrating.

“If something feels off, you need to change things in your life,” Swan said.

That rings true for Josh Schlesinger, director of wholesale and distribution for Bissell Brothers Brewing, located in Portland and Milo. Schlesinger said the pandemic gave people time to look into their values and deal with triggers that lead to bad behavior. For him, it was drinking too much, something that is easy to do in the tight-knit craft beer industry, where socializing and beer tasting are valued skills and drinks are easy to come by.

“You know when you’re feeling the effects of drinking 30 beers a week,” he said. “We all know how quickly we can get there.”

He said workers need to be honest with themselves about what triggers them to grab a beer.

“I’ve worked in the food and beverage industry for 24 years, and it took me 22 years to get to the point where I could have this very honest conversation about what kind of relationship I want to have with beer,” he said.

Having people who overdrink examine why they drink, such as whether it is to taste a new product or bond with a friend, could help them work on how they view alcohol, said Kristen Mazoki, a psychiatrist with Franklin Health Behavioral Services in Farmington.

“For people who use drinking as a coping mechanism, they tend to drink more in times of stress,” she said.

In the craft beer industry, it is all too easy to have a drink after work with colleagues or to have a glass rather than a small amount during a taste-testing.

“There’s a social pressure to drink anyway, and add onto that you work for a brewery,” Sean Sullivan, executive director of the Maine Brewers’ Guild, said. “I’m glad this is being discussed. I think it’s a conversation we should be having.”

A boss or coworker approaching someone about their drinking or another issue such as grumpiness needs to be tactful. Rather than asking directly what is wrong, ask them about their weekend and often they will get around to talking about a problem, Matt Swan, co-owner of Tumbledown Brewing, said.

“Do not underestimate the power of listening,” Keith Plouffe, director of Behavioral Health Services in Mount Vernon. He encourages managers and owners to share their own struggles with mental health with their staff to get conversations started.

“It’s available to you whenever you need it,” said Leo Foss, health and safety manager at Allagash. “We talked about breaking down the barriers of communication and letting everybody know that it’s OK to have these moments and have those conversations.”

Schlesinger said Bissell Brothers also is discussing whether to offer a similar program.

“There’s so much discussion about a sustainable lifestyle,” he said, referring to his own need to rethink his behavior. “I certainly can’t drink every day if I’m going to exist in this industry.”