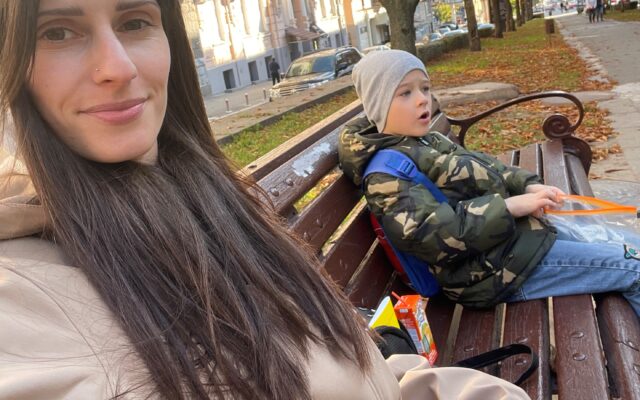 Valerie Royzman • April 3, 2022
My cousin, Oksana, vividly remembers when an explosion rocked the area near their apartment complex in early March. She glanced at her 5-year-old son, Makar.

My cousin, Oksana, vividly remembers when an explosion rocked the area near their apartment complex in early March. She glanced at her 5-year-old son, Makar. He shuddered and looked at her, his blue eyes flickering with fear. She still can’t shake the image.

“I still remember his face, and it’s painful,” she says. “At that very moment, I ran up and hugged him and said that everything was under control, that I was there. I walked him away from the windows and immediately told him that we are being protected and everything will be OK.”

Their building in Kyiv has remained untouched, but my cousin’s family lives not too far from the city’s center and areas heavily shelled and destroyed by Russian forces. Nearly all of the families in their neighborhood have fled to western Ukraine or other countries, some right after the invasion broke out, and others later, when they could no longer bear the anxiety and sounds of war playing out in the background of their lives.

There has been plenty of information and news in the United States about the best ways to talk to children about the consequences of the Russian invasion of Ukraine, but Ukrainian parents living in the war zone and fleeing their country have a distinctive perspective on the subject. Some of my family members in Kyiv are trying to find delicate ways to explain to their children the ravaging of their homeland.

It’s impossible to shield children from the war entirely because everything in their lives has changed, Oksana says. On Feb. 24, when Russia’s assault on Ukraine began, she woke up her son and told him he would not be going to school that morning. He was happy. She and her husband packed backpacks with essential items, in case they were forced to leave.

“We sat down to talk to him and explained the situation as gently as possible, without fear and hatred, that one country attacked our country and we are forced to fight,” she says. “That our military is actively protecting us, which is why he might hear loud noises in the street.”

The war has been raging around them for more than a month now, but Oksana strongly believes that a positive outlook and their decision to remain tranquil has helped their child suffer the least amount of emotional damage. Even if they’re afraid inside, their faces won’t show it. “Calm parents — calm child,” she writes. “That is a fact. Surely our panic won’t stop a flying rocket, so what’s the point of panicking?”

Their family has chosen to focus on what they can control, so they spend a lot of time reading books about Paddington the bear, space and Ukrainian fairy tales; building Legos and playing board games; and visiting the playground outside their complex on quiet days when the air doesn’t carry the smells of war — gunpowder, burning and death. Oksana has noticed that if she walks a few steps ahead, Makar instantly runs to her side and reaches for her hand.

“He once asked where all his friends were,” she says. “I replied that they left because they were afraid, but when the war is over, they will come home again and you will see each other. He never asked why we weren’t leaving. I think he trusts us and knows that no matter where we are, we are all together.”

My cousin is an optimist and believes love and peace will heal the world, but she has seen other families struggle to maintain the same perspective. One couple and their two children who lived in their building spent two weeks in the basement. They were especially panicked, which led to many arguments and stress about how they’ll make money to support their kids, she says. When they left for western Ukraine, Oksana fed their cat every day. They eventually returned for their pet, so now she waters their plants.

Oksana’s family is also visualizing what comes next. When Ukraine wins the war and peace blankets their country, they’ll celebrate by spending the entire day in the play room and filling their bellies with sweets, she tells Makar. He smiles and loves to be reminded. This is also when he’ll be able to see his grandmother and uncle again, who live not far away in Kyiv, but far enough that it’s dangerous to risk the trip.

My Aunt Elena has tried to remain composed for her three children and husband, but images of shattered windows and demolished buildings, vehicles riddled with bullets and worst of all — dead people lying in the streets — are burned into her mind forever. Her youngest, 5-year-old Kira, asked why the soldiers were lying there and not moving, and whether they, too, would end up like that.

At first, Elena told her daughter that the shelling was thunder. They needed to leave their home in Kyiv to a safer place, a house outside the city that her friend was letting them shelter in, because they had to avoid being struck by lightning. When the kids caught on, Elena explained that another country had attacked them and that sometimes this happens between countries.

Eventually they had to leave, so they made their way toward Lviv, near the Polish border. By that point, thousands of refugees had sought shelter there, so they moved on. They traveled through Moldova and Romania, and arrived in Bulgaria, where they had vacationed before.

Sometimes the kids would cry along the way, asking for ordinary things such as a McDonald’s meal and to be reunited with their friends. “Can you draw me a mermaid?” Elena would ask to distract them. There weren’t many safe places to stop as the family traveled through Ukraine; many gas stations were closed, and they were warned about saboteurs dressed as civilians, she says. There were days when the only food they could find was milk and bread from locals as they passed through many towns.

After nearly two weeks of travel, they are safe. The other day it hailed where they are staying in Bulgaria, and Elena’s two younger children quieted themselves immediately. They thought the Russian soldiers had come to hurt their family, she says. Their hearts need time to recover.

Thousands of miles away, Oksana kisses her son and lays with him as he falls asleep, their black cat snuggled nearby. Her husband gets ready to leave for his evening shift to defend the neighborhood from marauders. He and other area volunteers patrol the streets and search for injured civilians or those seeking shelter after their homes were obliterated. “He joined the ranks of those who protect our sleep from thieves,” Oksana says. She closes her eyes and hopes to awaken to a country where nothing can hurt them.

Royzman is a reporter for the Piscataquis Observer/Bangor Daily News originally from Toledo, Ohio. Valerie is a proud daughter of immigrants from Ukraine. She has relatives in Kropyvnytskyi, Kyiv, Odesa and Znamenka. Quotes from her family were translated from Russian to English. You can read her first-person accounts here and here.