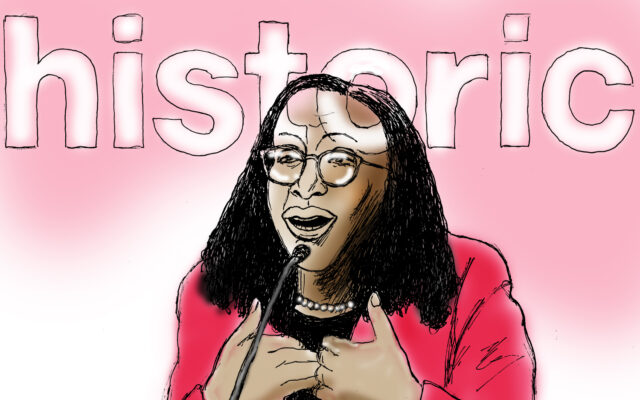 Judge Ketanji Brown Jackson is qualified and compassionate. The Senate should confirm her.

Contributed • March 25, 2022
By Maeghan Maloney and Marianne Lynch To sit on the U.S.

By Maeghan Maloney and Marianne Lynch

To sit on the U.S. Supreme Court, nominees must dedicate their professional careers to the pursuit of justice. They need to have exceptional credentials, unimpeachable characters and a commitment to equal justice under the law. All people who sit on the bench bring their own experiences and make history.

It is clear to us that President Joe Biden’s selection, Judge Ketanji Brown Jackson, is eminently qualified for this role and we urge the U.S. Senate to confirm her.

Jackson is currently serving on the U.S. Court of Appeals for the District of Columbia — the second highest court in the land. She has broad experience across the legal profession — as a federal appellate judge, a federal district court judge, a member of the U.S. Sentencing Commission, an attorney in private practice and as a federal public defender.

Over the course of this impressive career, she has been confirmed by the U.S. Senate three times and always with bipartisan support. As a Democrat and a Republican in our respective roles, we know that access to justice is not and should not be a partisan issue.

As district attorneys and thereby members of law enforcement, we believe in the prompt, effective and compassionate prosecution of all cases. We advocate for the interest of all victims, respect law enforcement agencies, responsibly steward public resources and hold offenders accountable — while at the same time protecting the constitutional and legal rights of the accused.

From our perspective, this fair and just rule of law can only occur when high-quality representation is afforded to all defendants. Here in Maine, we have our own structure. An indigent legal defense fund exists for private lawyers to provide legal representation to those who can’t afford it. In other parts of the country, there are public defenders employed by the state.

Regardless of what it is called, defending the rights of people who cannot afford a lawyer is just as valuable as representing those who can. Unique insight and understanding is gained from working directly with indigent defendants or directly with victims. This experience cannot be replicated.

Jackson would make history as the first public defender to serve on the Supreme Court. Ultimately, we believe this experience would enrich judicial decision making, promote public confidence in the judiciary, and move us closer to a court that better represents the experiences of all Americans.

From a courtroom in Maine to the highest in the land, we need to have confidence that the courts will deliver equal justice, and that rulings will be independent and fair-minded. But to truly achieve this, they must also reflect the diversity of the communities they serve. Experience enriches decision making and Jackson’s is extraordinary.

As women in the field of law enforcement, we acknowledge the barriers Jackson faced to make it to where she is today. And as the first Black woman to be nominated, she has overcome a system that for too long has been discriminatory.

We have full faith that Jackson will carry out her duties as a justice fairly and without prejudice. With her confirmation, we should all celebrate this next chapter of history.