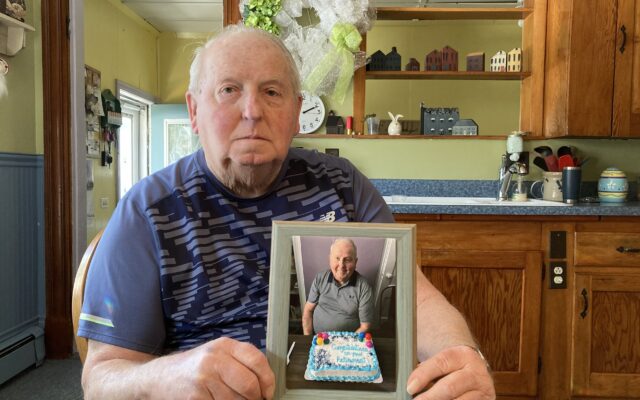 One man’s retirement will stall denture work in Piscataquis County

Valerie Royzman • March 22, 2022
Galen Larson sat in his brightly painted kitchen in Milo, his hands clasped on his wooden table. Sunlight streamed through the window as he reflected on the intricate process of making and repairing dentures, a craft that kept his hands busy for more than 60 years.

Galen Larson sat in his brightly painted kitchen in Milo, his hands clasped on his wooden table. Sunlight streamed through the window as he reflected on the intricate process of making and repairing dentures, a craft that kept his hands busy for more than 60 years.

“I loved it,” the 82-year-old said, smiling. “I don’t know what I could have done that I would like more than working at the dental office. I enjoyed going to work every single day of my life. It wasn’t a chore.”

Larson retired — originally when he turned 65, and last month officially — from his work at the dental laboratory at 5 Winter St. in Dover-Foxcroft, leaving a gap in Piscataquis County that won’t be easy to fill.

The loss is problematic for Dover-Foxcroft and surrounding towns in Piscataquis, one of Maine’s most rural counties with limited dental care options, because now dental patients will have to wait perhaps days or weeks for denture work and repairs and orthodontic appliances.

Dental laboratories across the state are also sparse and dental technicians — people like Larson — often work within denturists’ practices. Maine is one of six states that legislates and allows denturists to practice.

Piscataquis is losing an expert who adored his profession and worked hard to meet the needs of patients quickly, said Dr. Daniel Steinke, who owns Steinke & Caruso Dental Care, which houses the laboratory.

If a patient dropped their dentures in the sink and chipped a tooth, they could sit and wait an hour for Larson to make the necessary repairs, said Dr. John Clark of J.W. Clark Dental Studio in Bangor. He used Larson’s services for 10 to 15 years when he had a dental office in Dover-Foxcroft, which closed last year.

“I don’t know who’s going to fill the void” in the community, he said, adding patients may need to travel to Bangor or other areas of the state. “He made a lot of smiles for a lot of people.”

Because Clark has experience as a dental laboratory technician, he handles full and partial dentures for his patients. Clark seeks occasional help from a lab in Bangor, which is almost always booked, he said.

Steinke’s dental office is sending work to Midcoast Denture Design, which has offices in Brewer and Ellsworth, and dental labs in New York and Georgia. Not having Larson has “changed our paradigm,” he said. It makes no difference whether work is sent someplace in Maine or out of state because the mailing process takes time, he said.

“It was not a business you see on the streetside, but it was a business that many benefitted from,” he said. “We’re struggling now, honestly. People in the practice and all over the county are used to having that level of customer service.”

Larson at first could not recall what sparked the idea to pursue a future in the dental field, but later said that maybe it was his cousin’s husband, who worked as a lab man, who inspired him.

After high school graduation, he left his job at the American Thread Company in Milo and ended up at a trade school for mechanical dentistry in Boston. In 1960, a year into the program, Dr. Harold Gerrish hired Larson to work in the lab.

Steinke bought Gerrish’s dental office in 1986, and Larson continued to work for him. Larson worked with Dr. Ralph Monroe in Milo and Dr. Charles Dunphey in Guilford, as well as Dr. Norman Hill, Dr. John Clark and Dr. Ray Helinski in Dover-Foxcroft, he said.

Larson most enjoyed working on full and partial dentures, but he found crowns and bridges more challenging, he said.

The kind of work that Larson performed requires a good eye for aesthetics, Clark said. Teeth have to be the right shade so they fit someone’s complexion and features, and they need to look real. There’s an art to the process, he said.

Larson said as he got older, he realized he was having a harder time walking and climbing stairs. In recent years he worked only three days a week. He misses the job, even having to start at 4:30 a.m. with Garrish some days. In the 1960s, people couldn’t always take time off or they’d get docked pay, so they’d squeeze appointments in ahead of the workday, he said.

“You think back on how quickly you could do some of these things that you can’t anymore,” he said. “That’s probably what’s most surprising. It was time to go.”

Steinke hopes to fill the open position at the lab, but he knows it won’t be easy. There is virtually no pool of denturists and dental technicians, said Joseph Adkins, Maine Licensed Denturist Association president.

When a community loses someone who’s been in the business for decades and knows the ins and outs, replacing them is nearly impossible. “It’s such a niche piece of work,” Adkins said.