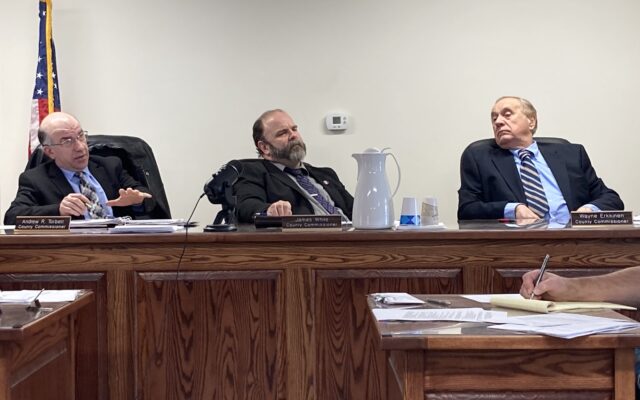 The cost of a new ski lift has shot up $1 million in just six months, said Perry Williams, developer of a proposed year-round ski resort project on Big Moose Mountain in Piscataquis County.

Rising steel prices throughout the COVID-19 pandemic are causing the increase, said Williams of Big Lake Development LLC. He, along with Matthew Dieterich and Andrew Nelson of James W. Sewall Co., which is handling permitting, updated the status of the proposed $113.5 million project Tuesday at a Piscataquis County Commissioners meeting.

Fluctuating material costs and shortages, a changed financial structure to fund the redevelopment and an upcoming public hearing have delayed the project significantly, Williams said. The developer and others involved have returned to the drawing board several times over the last three and a half years to set the project up for success and sustainability. The next steps for developers is to submit information that the Maine Land Use Planning Commission requested and the public hearing.

“Part of the reason we didn’t come forward sooner with a public statement was we didn’t have the financing lined up,” Williams said. “We didn’t want to come out and say, we’re going to do this, this and this, until we knew more.”

The developer has a purchase and sale agreement with the owner of the property, James Confalone of Florida, that has been extended 15 times, Williams said.

Price estimates have changed, sometimes by millions of dollars, throughout the planning process with PC Construction Company and other vendors, he said.

Barclays, the investment bank, had a package involving multiple types of bonds, but the third-tier bonds were challenging to sell, Williams said. When those involved with the project connected with wealthy Greenville area residents, everybody wanted to help, but nobody wanted to write a check, he said.

Developers settled on a new funding structure with Barclays in December allowing Big Lake Development LLC, through the real estate development, to make a charitable donation to the project, Williams said.

“That’s where it sits today,” he said. “We still have that tax-free structure where the county ends up owning it when the bond is paid off. But we’re putting in a taxable piece to replace that third tier. It’s a taxable bond. Barclay’s feels they can sell that bond.”

Since the early planning phases of the redevelopment, those involved have wanted to carry forward the project in the right way, rather than partially redeveloping the area or only replacing the broken ski lift on the upper mountain because everything up there is so far gone, Williams said.

Plans for the first phase of the project — including a new six-person chairlift, zipline, base ski lodge, 60-room hotel, brew house and other features — have remained the same, he said.

Developers have worked closely with industry experts and planners on how the ski resort would look and function in a way that would keep it sustainable. They have explored questions related to daily capacity, parking, bathrooms, lift capacity while going up and down the mountain and other factors, Williams said.

The public hearing, which the Maine Land Use Planning Commission approved in February but has not scheduled, has put the project on pause in some ways. The agency was getting ready to approve a development permit just before two parties requested a hearing, Williams said.

Delays are costly for a project like this because the permit is essential to the funding package. Barclays won’t close without the permit, he said, adding the effects of the war in Ukraine may also hurt the project.

“There’s nothing in the LUPC guidelines that says when the hearing needs to occur or who actually sets the date,” said Dieterich of James W. Sewall Co. “That’s the frustration that we’ve had in this process, is this hearing could have happened long ago.”

Developers are preparing materials to send to the planning commission related to the ski resort’s connection to the Moosehead Sanitary District in Greenville and questions about wildlife, he said.

Dieterich said the hearing might not happen until about July, if the commissioners decide in May to schedule one.

Chris King, secretary of residents group Moosehead Region Futures Committee, asked whether developers have come to an agreement with the local sanitary district about a sewer line and brought up other concerns.

Piscataquis County Commissioner Andrew Torbett chimed in, at one point referring to King’s comments as “bullcrap.” King’s points boiled down to discouragement and are further delaying the project and development of the Greenville area, he said.

The cost of extending the sewer line to connect to the Moosehead Sanitary District would be handled by developers, Dieterich said. The district provided a letter stating its capacity, and there’s an understanding that the ski resort would pay the same rates as others, he said.

“The only thing that is true about what he [King] said is there is not a final agreement in place,” Dieterich said.

Permits generally have conditions on them where something like the sewer connection would be worked out, Nelson said.

Williams addressed one of the Moosehead Region Futures Committee’s concerns related to funding the project. Tax increment financing won’t pay back all the bonds, though it is a piece of the plan, he said.

“It’s about getting people there to go ski, eat in the restaurant and buy beer,” he said. “That’s what pays the bills — is people coming. Not so many that this is the next Bar Harbor. We’re never going to be the next Bar Harbor. This is less than a quarter of what Plum Creek approved.”

The Moosehead Lake economic corporation has held numerous public forums, stakeholder meetings and surveys over the years, President Margarita Contreni said via Zoom. The organization is addressing the lack of workforce housing in the Greenville area.

“Without a doubt, residents clearly prefer a future for our region that includes a full-season resort on Moose Mountain,” she said.

Having a stable entity that provides year-round jobs to the region is crucial, said Steve Levesque, former president of the economic corporation. The developers are conscious of addressing concerns related to environmental issues, traffic and other factors, he said.