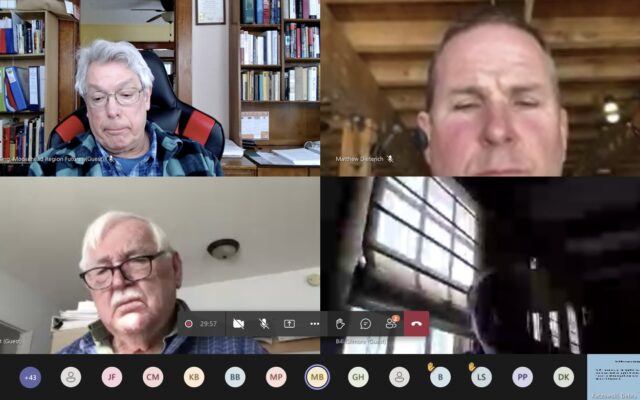 Valerie Royzman • February 9, 2022
The Maine Land Use Planning Commission unanimously voted to hold a public hearing for a proposed $113.5 million year-round ski resort in Piscataquis County during a meeting Wednesday.

The Maine Land Use Planning Commission unanimously voted to hold a public hearing for a proposed $113.5 million year-round ski resort in Piscataquis County during a meeting Wednesday.

The commissioners did not set a date for the public hearing, though they discussed whether it should take place virtually or in person in Greenville. One commissioner was not present for the vote.

The decision is the latest wrinkle in a process that has taken the developer, Big Lake Development LLC, and partners involved more than three years thus far. A public hearing will further delay the planning commission’s decision on the permitting for phase one of the project by a few months. It also will allow the public a chance to bring their concerns and questions before developers, which could influence the project’s final look and timeline.

Phase one of the project involves a new chairlift, base ski lodge, 60-room hotel, brew house and other features. The developer’s application, originally submitted in March 2021, is still under review by planning commission staff, who recommended a public hearing during the Wednesday meeting.

Debra Kaczowski, permitting and compliance regional supervisor, said the planning commission has worked with developers and the Maine Department of Inland Fisheries and Wildlife to address questions about protecting natural resources, such as potential impacts on streams and wetlands.

The planning commission has requested more information about the ski resort’s connection to the Moosehead Sanitary District. That includes the projected amount of wastewater from the ski resort, along with the district’s capacity, what the project could mean for its licensing and the terms of agreement between the two parties, Kaczowski said.

“We do feel that there’s been ample time for a hearing,” said Matt Dieterich, executive vice president of James W. Sewall Co., which is responsible for the permitting. “We were advised early in the process that they didn’t think a hearing would be necessary. At this late point, it’s going to create delays to the project, probably at least two-plus months.”

Dieterich, on behalf of those involved with the project, asked the state not to hold a public hearing in a letter on Monday.

The purchase and sales agreement with James Confalone of Florida, the current owner of the ski resort, has been extended a number times, Dieterich said.

“I don’t know how much longer we can really do that,” he said. “Getting the property under control and getting financial closing is key in continuing to move this project forward. It’s very possible that this opportunity could evaporate, unfortunately.”

The proposed project is the first step in restoring public access to the ski resort, Dieterich said. The sale of the land cannot occur without permitting in place because the value of the property is “vastly different” with or without a permit, he said. That also affects developers’ ability to order and install the new ski lift on the upper mountain.

Chris King, secretary of the Moosehead Region Futures Committee, spoke on behalf of the group, though several members tuned in to the virtual meeting.

“For the developer to cite our delay in requesting a hearing seems a little incongruous to me,” he said. “The developer still has not even gotten an agreement from the sanitary district to accept any effluent from the project.”

King said he was informed by one of the sanitary district’s elected board members that the district “has no intention to construct the sewer line from the development down to Greenville Junction, which is the nearest existing connection.”

He also brought up other questions and concerns the group had outlined in its request for a public hearing, including resort-related financing and why the phases aren’t being considered one project.

The ski area has been in need of attention for many years, said William Gilmore, one of nine members of the planning commission.

“Hopefully somewhere down the road, you can put this thing together and make it what it ought to be and should have been years ago,” he said. “I also look at something of this magnitude and believe there ought to be some public discussion about rights and wrongs and how things come to be.”

The planning commission has held public hearings for much smaller projects and they continued to move forward successfully, such as the ski resort on Saddleback Mountain, Gilmore said, adding that comments from the public could enhance the process.