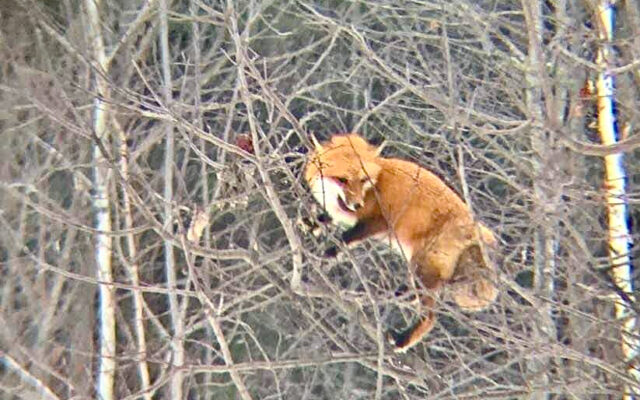 Contributed • January 12, 2022
By Pete Warner, Bangor Daily News Staff When Laurie and Norm Turner began building their home in Medford 15 years ago, they designed it so they could sit at the kitchen table and watch birds and other wildlife through the windows. Never did Laurie Turner expect to look out and see a red fox climbing in an apple tree.

When Laurie and Norm Turner began building their home in Medford 15 years ago, they designed it so they could sit at the kitchen table and watch birds and other wildlife through the windows.

Never did Laurie Turner expect to look out and see a red fox climbing in an apple tree.

“It was definitely a surprise, a first for us,” she said of the sighting.

“We enjoy feeding and watching the birds. When I motioned for my husband to come into the kitchen, he shared with me that he was expecting to see a bird and that it took him a moment to process what we were witnessing,” Laurie said.

“Red Foxes have limited climbing abilities, but can climb up small trees, leaning trees and jump high to get onto lower tree branches to some degree,” she said. “In this case, it looks like the red fox was quite motivated to get the last apple from the tree before someone else did.”

The hungry fox was able to reach an apple and knock it to the ground.

Red foxes prefer pouncing on small mammals, but aren’t limited to them.

“They are omnivores and take advantage of available food sources,” Webb said. “Apples are a favorite for wildlife.”

Laurie Turner said the apple came from a tree that was given to them by their daughters. It is one of seven on the property.

“The fox stayed for a while and enjoyed the frozen treat,” she said.

The other six trees, Laurie said, were “gifts” from their dog Oakley, who apparently enjoyed eating apples and spreading the seeds across the property.

Since buying the land, the Turners have been painfully aware of the presence of foxes. When they first arrived, they kept chickens and guinea fowl.

“It was an expensive education, for both us and the flocks,” Laurie said of losses to foxes, which knew when it was breakfast time.

“Momma fox acquired a listening skill that amazed both my husband and I,” Laurie said. “She learned the sound of my husband’s truck. As soon as he would leave in the morning, she would come in for a meal. It became quite a game between the fox and my husband.”

The Turners continue to marvel at all the amazing wildlife they see on their property. She recently took a photo of a coyote strolling under a bird feeder hanging from one of Oakley’s apple trees.

“We both enjoy hunting and all seasons of fishing,” Laurie said. “[We] have spent many hours enjoying what Maine gifts us. We’re both feeling pretty fortunate to have been in the right spot to have witnessed this.”

Thanks, Laurie, for sharing your photo and the story!