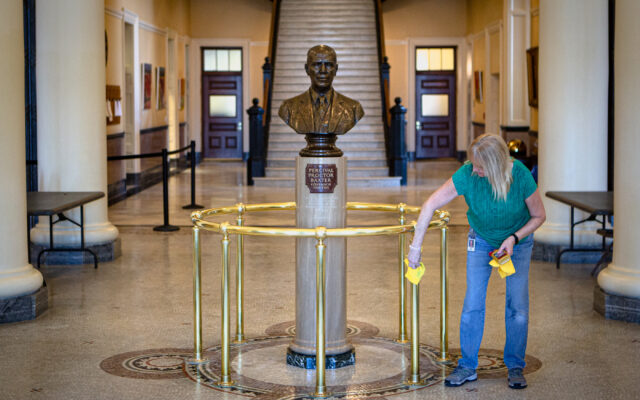 One hundred years ago – on Jan. 1, 1922 – then-Gov. Percival Baxter issued a resolution outlining a vision for a more charitable Maine.

Although many of his hopes didn’t come to pass, his resolution remains relevant today.

“As the individual is accustomed to pause upon the threshold of a New Year to review the past and survey the prospect before him, so may the people of Maine on New Year’s Day, 1922, look back upon the year that has closed and resolve upon a course of action for the year that has begun,” he wrote in the official proclamation.

“Let us as a people, whatever our origin or creed, and regardless of our station in life, enter upon this New Year with the determination:

To recognize honest differences of opinion, and to make serious effort to get other people’s point of view:

To give other people credit for good intentions:

To think and speak well of others:

To ask no privileges for ourselves we are not willing to accord to others:

To remember that true personal liberty goes hand in hand with self-control:

To appreciate the great privilege it is to be a citizen of Maine, a state that has no peer among its sister states:

To make Maine a law-abiding state that will serve as an example to our country: and

To add the ‘Golden Rule’ to the state’s motto ‘Dirigo.’”

It would be easy to point out that Baxter made this call to Maine’s citizens to be more considerate of one another from a place of privilege. He was a wealthy white man at a time when Black Americans, Indigenous Americans and recent arrivals were considered less-than and, although they had gained some rights on paper, were too often denied basic rights, such as voting and equal wages and housing.

Around the world, 1921 had been a tumultuous year with continued annexations and invasions in the fallout from World War I. The Chinese Communist Party was founded, and Adolf Hitler became the leader of the National Socialist German Workers Party and the Partito Nazionalista Fascista was formed in Italy by Benito Mussolini.

In the U.S., Baxter’s proclamation came near the beginning of the so-called Roaring ‘20s, a time of rapid change and innovation. Radio was becoming ubiquitous and cars gained popularity. Babe Ruth dominated baseball and the first Miss America pageant was held. Prohibition had begun and “fashion” police monitored hemlines and necklines.

At the turn of the 1920s, women and Indigenous Americans still could not vote (which persisted for Indigenous people in Maine into the late 1930s as the state was one of the last to comply with the Indian Citizenship Act) and schools were segregated. The Tulsa race riots, one of the deadliest incidents of racial violence in the United States, occurred in spring of 1921.

In Maine, timber and paper were economic drivers, but concerns had emerged about the rapid pace of timber harvesting. The advent of marine engines was changing the state’s fishing industry and the communities that relied upon it. Most of Maine’s residents in the early 1920s still lived in rural parts of the state although the growth of manufacturing drew people to the state’s cities, as was happening around the world. “Rusticators” were welcomed for their economic contributions to the state but also viewed unfavorably as being “from away.”

More darkly as Baxter began his second year in the governor’s office, the Ku Klux Klan was gaining popularity in the state. The Klan would go on to hold its first daylight parade in the U.S. in Milo in 1923.

Against this backdrop, Baxter’s words at the dawn of 1922 sounded a hopeful message of trust, cooperation and tolerance.

It is a message that, sadly, remains relevant today as our country and state are divided by political views that have spilled into our responses to the coronavirus pandemic, climate change, threats to our electoral system, among others.

As in 1922, we’d do well to remember to recognize good intentions, to remember that personal liberty comes with responsibilities, to share our privileges and, perhaps most important, to practice the golden rule.