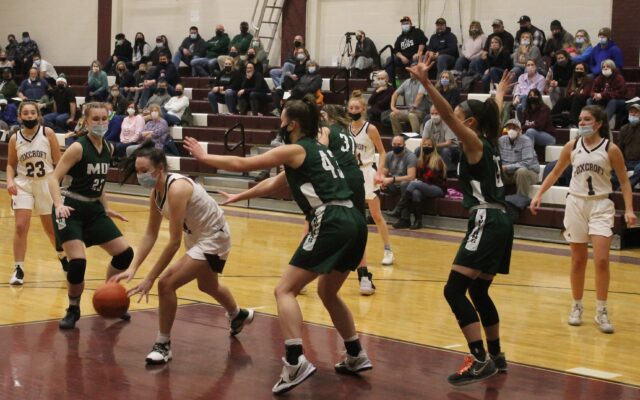 MDI pulls away from Foxcroft during the fourth quarter

Stuart Hedstrom • December 29, 2021
DOVER-FOXCROFT – Twice during the fourth quarter of a girls Big East Conference game between Foxcroft Academy and Mount Desert island High School on Dec. 28 the host Ponies tied the game on a 3-point shot – 37 apiece and then 40-40.

DOVER-FOXCROFT – Twice during the fourth quarter of a girls Big East Conference game between Foxcroft Academy and Mount Desert island High School on Dec. 28 the host Ponies tied the game on a 3-point shot – 37 apiece and then 40-40. But each time the Trojans regained the lead, including closing the contest on a 9-3 run to earn a 49-43 victory.

MDI improved to 4-1, following up a 54-46 loss vs. Presque Isle (3-1) after winning the team’s first three games. The Trojans handed now 2-1 Foxcroft its first loss of the young season. The meeting is the only one on the regular season schedule between the two programs.

Foxcroft senior Kiya Cook hit her second 3-pointer of the early minutes of the fourth quarter to tie the game at 37. All nine of Cook’s points came in the final 8-minute session. She finished second on her squad’s scoring sheet and had the third-highest output of the day.

Shortly thereafter Trojan senior Elizabeth Jones put the ball in from the low post and after being fouled she made the resulting free throw for a 40-37 advantage. Jones led her team with 12 points as she was the lone MDI player to reach double figures.

On the next possession Foxcroft junior Annie Raynes connected from behind the arc to tie the game at 40. The three gave Raynes the last of her game-high 19 points, with the bulk of these coming on seven field goals/eight overall shots from the floor.

MDI senior Olivia Gray’s 3-pointer put her team ahead 43-40 with just under 5:00 to go, a lead the team never would relinquish. The Trojans had a layup and jumper for four more before a Cook foul shot put her team within two possessions at 47-41.

Cook followed with two more for MDI by dribbling to the hoop for a layup after the Ponies stole the ball near midcourt. At this point the score was 49-43 with 2:09 on the clock. Neither team added to its point total in the last 129 seconds as the Trojans held on.

Foxcroft took the team’s only lead during the second quarter on an 8-0 run to open the session. A basket in the post and layup by Raynes came before and after a pair of free throws from senior Meghan Spooner.

Raynes then took the inbounds pass and sank a jump shot from the left to put Foxcroft on top 16-14 at the 4:05-mark of the second quarter. She scored six in the second quarter and then eight in the third for 14 of her 19 points.