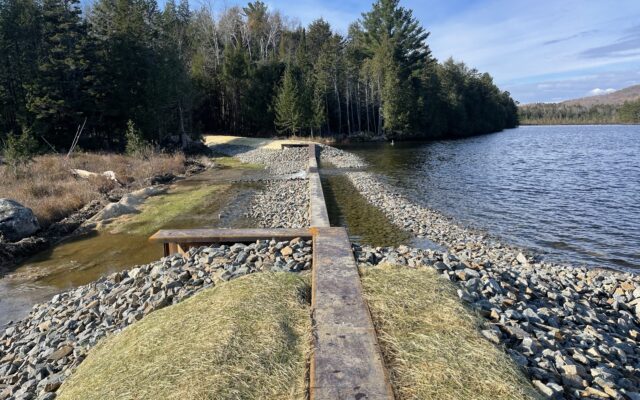 Valerie Royzman • December 22, 2021
GUILFORD — For the first time in decades, the pond that serves as Dover-Foxcroft’s water supply has a solid dam built for the future. Reconstruction wrapped up in October on the dam at Salmon Stream Pond, with modifications designed to improve water quality and address storage levels and seepage problems, Dover-Foxcroft Water District Superintendent Rob Durgin said.

GUILFORD — For the first time in decades, the pond that serves as Dover-Foxcroft’s water supply has a solid dam built for the future.

Although the water district has worked on the earthen dam and spillway over the years — including issuing a water conservation request to customers in summer 2016 and installing a new intake in 2017 — it was in declining health, especially due to recent droughts. The $390,000 reconstruction should protect the water supply and resilience in the long term, Durgin said.

“The pond was held back by an earthen dam constructed around 1950 following a serious drought,” Durgin said. “The previous outlet was a rock-and-stick-type dam to help hold water levels. This dam was porous at best. It slowed the water flow more than actually retaining it.”

The 70-acre pond, which is fed by mountain streams and possibly some springs, has served as the water source for Dover-Foxcroft for more than a century, he said. The reconstruction project began in September.

The water district began paying close attention to Salmon Stream Pond and its system in 2016, when the area suffered drought conditions. Late that year, officials observed dwindling water depth in the intake structure, about a foot lower than the previous season. It was due to “low snowpack the previous winter (2015-16), little rainfall and dry, hot weather through the summer,” Durgin said.

A voluntary water conservation request was issued to customers.

Dirigo Engineering, with whom the water district contracts for services, brought in geologists to complete an in-depth survey. They drilled underground to see what was beneath the dam at the time and to assess whether a reconstructed dam would help hold more water back, Durgin said.

A new intake structure was then engineered and installed in 2017. It was meant to maintain flow during low water conditions, Durgin said.

The water district had to get approval and acquire permitting from the Maine Department of Environmental Protection before it could pursue the project, he said. Dirigo Engineering helped with the process. Sargent Construction Company, based in Old Town, completed the dam reconstruction.