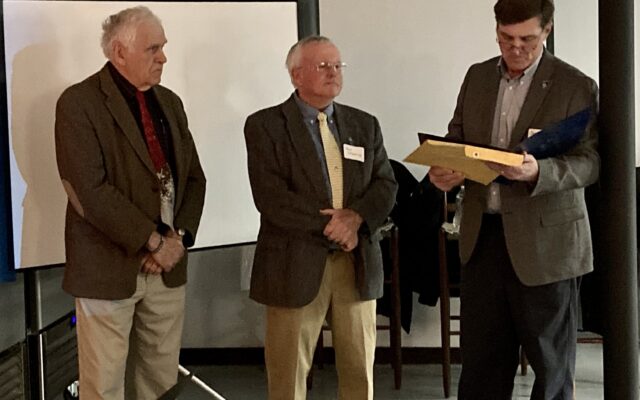 Valerie Royzman • December 7, 2021
GUILFORD — The Piscataquis County Economic Development Council recognized Rep. Paul Stearns — who worked as an educator, coach and administrator for 37 years and serves as an at-large member on the council’s 2021 executive committee — as this year’s Pete Myrick Award winner.

GUILFORD — The Piscataquis County Economic Development Council recognized Rep. Paul Stearns — who worked as an educator, coach and administrator for 37 years and serves as an at-large member on the council’s 2021 executive committee — as this year’s Pete Myrick Award winner.

Every year, the award goes to a county resident, business or organization with a commitment and outstanding contributions to education, economic development and civic engagement in Piscataquis County. It honors someone who goes “above and beyond” with community service, said Denise Buzzelli, executive committee president.

The PCEDC presented Stearns with the award during its annual meeting at the Craft Cafe in Guilford on Monday.

Myrick — who was a Guilford resident, longtime educator at Maine School Administrative District 4 and one of the founders of the PCEDC — died in 2002.

“Paul is a true public servant. … As a member of the Maine House of Representatives, he has established a well-deserved reputation as a problem solver,” Collins said. “He worked with energy and vision on behalf of the people of his district and our state.”

Perhaps Stearns’ largest contributions come from his many years working in public education, she said. He served as a role model and mentor for countless young people, Collins noted.

Stearns taught and coached in SAD 4, then became principal of the Upper Kennebec Valley Jr./Sr. High School in Bingham in 1996, according to the Maine House Republicans website. Between 1999 and 2003, he also served as principal in SAD 68. Stearns returned to SAD 4 as superintendent for 10 years before retiring in 2013.

Tom Goulette, who is vice president of the PCEDC’s executive committee and won the Myrick award last year, nominated Stearns. He reminisced about their friendship over the years, including memories of ice fishing and hunting, working at Kiwanis and watching Stearns dress up as Santa Claus.

“It’s been rewarding to live near and around him and to watch him grow. … When he puts his mind to something, he goes after it and — boom,” he said, adding Stearns has done this with both his career and hobbies, which has led to great success.

During Stearns’ remarks, he teared up when he thanked his wife, Melissa. Stearns recalled a funny moment at home when he told her about the award. She asked what the honor entailed.

“I said, ‘Well, you go to an award thing, and that’s about it.’ … Then I said, ‘There is one other thing, though. You are going to have to bow when I come into a room,’” Stearns said, and laughter filled the room.

“It takes a lot of people plugging away and trying to do small things to make a big difference,” he said, and he thanked those working on behalf of Piscataquis County.

During the meeting, Brian Lippold — president of Casco Bay Advisors, a broadband consulting firm — provided an update on the county’s broadband inventory and gap analysis. The project began three to four months ago, he said.

“The goal was to identify what kind of broadband infrastructure you have in the communities today, where the gaps are, price out the cost to fill those gaps and set the stage for working with service providers or the municipalities themselves to solve that broadband challenge,” Lippold said.

The state has about $256 million dedicated to broadband expansion, with potentially more funding down the line, he noted. The inventory and gap analysis report is designed to help the county compete for the funding.

Lippold presented a GIS map based on his research. It used four colors to highlight areas in the county where fiber is available, where TV infrastructure is available, where both fiber and cable are available and unserved areas. Towns, service providers and the public will be able to access the data.

The report cost $60,000, PCEDC Executive Director John Shea said. ConnectMaine provided half the funding. Towns and municipalities used a portion of their ARPA funds to cover the rest, he said.

PCEDC will host a webinar with Lippold at 3:30 p.m. Dec. 16, via Zoom, to review the final report and discuss next steps in developing project and funding opportunities. Registration is required to attend.