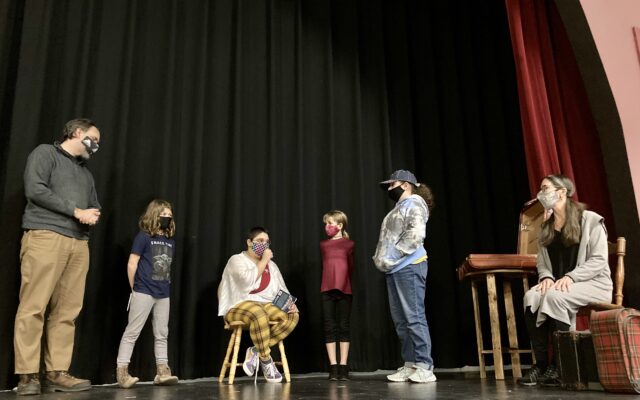 Center Theatre to bring ‘A Dickens Carol’ to stage in December

Valerie Royzman • November 27, 2021
DOVER-FOXCROFT — Benjamin Johnston has been involved with productions at the Center Theatre for the Performing Arts since he was 5 or 6 years old. The first show he remembers being cast in is “Joseph and the Amazing Technicolor Dreamcoat,” which premiered in 2011.

DOVER-FOXCROFT — Benjamin Johnston has been involved with productions at the Center Theatre for the Performing Arts since he was 5 or 6 years old.

The first show he remembers being cast in is “Joseph and the Amazing Technicolor Dreamcoat,” which premiered in 2011. Johnston, now 17 and a student at Foxcroft Academy, is rehearsing for three characters in the theater’s upcoming holiday production, “A Dickens Carol” — Father Christmas, Ghost of Christmas Present and Alistair Winterfezz.

The Slightly Off-Center Players, a community theater group, is presenting “A Dickens Carol,” by Ned Crowley Dec. 17-19. After the COVID-19 pandemic sent the arts tumbling into uncertainty, those involved at the Center Theatre are eagerly awaiting the holiday show.

The theater hasn’t offered any full productions since late 2019, with the exception of outdoor performances for its kids and high school programs this summer, and a small show with a three-member cast last December, Executive Director Patrick Myers said.

“Because of the pandemic, we were going to do ‘Oliver!’ [in the spring of 2020], but it was canceled, sadly,” Johnston said at rehearsal Friday. “This is like a refresher. Everybody comes back to the theater. We can meet up with friends and perform a show again.

“Also, it’s about the Christmas spirit. You want to put on a good show with a message. Every year, it’s a tradition.”

The production uses some biographical information about Charles Dickens to tell the tale of a workaholic writer who discovers the true meaning of Christmas. Based on his own research, Director Derrick Buschmann said the playwright took artistic licensing to dramatize some events.

“Honestly, I find the show more emotionally engaging than pretty close to any version of ‘A Christmas Carol,’” Buschmann said, adding that Dickens’ background, his attachments to family and friends and other elements are explored. “You have more emotional investment in Dickens than you do [Ebenezer] Scrooge.”

Myers, who plays Dickens and first got involved with the Center Theatre 16 or 17 years ago, agreed. Scrooge’s character sometimes feels one-dimensional, and Dickens has a wife, children, editors and other relationships in his life. “There’s more to sink your teeth into,” he said.

Johnston enjoys playing the Ghost of Christmas Present because the character is “honest and very happy-go-lucky, but also tries to teach Dickens a lesson” he said.

Lori Knack, 55, plays Kate Dickens, the main character’s wife. She likes being involved with the Slightly Off-Center Players because it allows her to have fun with other community members and transports her to a calmer world.

“It’s really good to hear somebody else’s opinion on what you think is good acting,” she said. “In your mind, you think you’re doing really well, and then hearing Derrick give you his criticisms, it makes you pause and think about how you could do this better.”

During rehearsal Friday morning, Buschmann sat in the auditorium and watched a small group of actors run through a scene. He offered feedback, telling the cast members to project their voices and, in some cases, to pick a focus point in the distance, like a sconce or a speaker, so their eyes aren’t wandering.

Behind the scenes, Kristen Gilbert — the costume director, who is also married to Buschmann — fitted cast members for their costumes. Her favorite part about productions is the first dress rehearsal, when all the cast members are together and dressed for their parts.

“Some people really struggle to get completely into character,” she said. “Then they get the costume on, and that’s who they are. The transformation is pretty fun to watch.”

Productions at local theaters take a lot of time and hard work, and elements are reimagined as the show takes form. Buschmann offered a unique metaphor, comparing sounds, lights, costumes and props to a cake or a house.

“You have to blueprint, you have to design, you have to redesign … you have to take the part of it you love the most and get rid of it because you’re not going to have the time or the budget or it just isn’t going to work in the space,” he said. “There are 16 different versions of this show that have come and gone in my head. It’s just slowly pairing down and as we get closer, it becomes the show it becomes.”

Knack highlighted the importance of live theater, especially in pandemic times. Performances from a local cast offer hopes and positivity to community members and families, she said.

“I find this puts the magic back into the holidays,” she said. “It really does.”
To purchase tickets for the show online, visit the Center Theatre’s website.