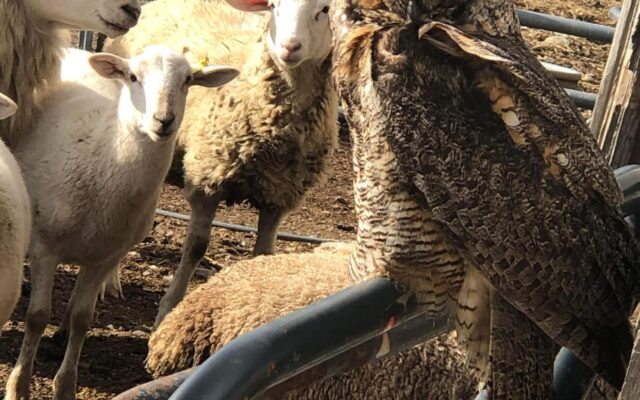 Contributed • November 17, 2021
By Julia Bayly, Bangor Daily News Staff DOVER-FOXCROFT — Over the last couple of weeks a juvenile great horned owl has taken to dining with domestic ducks, drinking from a common livestock watering bucket and hanging out during the day with the sheep at Rock Maple Farm in Dover-Foxcroft. Alan Burnes, owner of Rock Maple, said he and his family started noticing the bird hanging around two weeks ago.

DOVER-FOXCROFT — Over the last couple of weeks a juvenile great horned owl has taken to dining with domestic ducks, drinking from a common livestock watering bucket and hanging out during the day with the sheep at Rock Maple Farm in Dover-Foxcroft.

Alan Burnes, owner of Rock Maple, said he and his family started noticing the bird hanging around two weeks ago.

“We heard owls out in the woods and then we started noticing [owl] droppings in our barn,” Burnes said. “It got to the point where I would go out at night and hear those silent wings as an owl flew off the barn and then I’d catch sight of it at times.”

Since then, the winged predator has become a regular guest at Rock Maple Farm, and in a year that has seen an explosion in rat populations on farms and other rural areas around the state, it’s providing a much-needed service. On top of the pure cuteness of the newly formed interspecies friendships, the owl is killing and feasting on the unwanted rodents.

Burnes began noticing crows in the Bud Leavitt Wildlife Management Area next to his farm were acting quite agitated in a particular spot two weeks ago. He wanted to see if the behavior was due to the presence of a dead animal or resident predator, but family and chores soon put the matter out of his mind.

“It all started making sense when we saw the owl flying down to drink out of the same bucket that the sheep and ducks use,” Burnes said. “It looks like the owl had decided it had had enough of the crows and that we were a better place to hang out to get some peace and quiet.”

In exchange for the peaceful surroundings, the owl has taken on the job of barnyard rodent control.

“My wife feeds the ducks at dusk in front of the barn every day,” Burnes said. “We watched and the owl comes down from the post swooping in to scoop up a rat that was right next to the ducks.”

Judging from the lack of any reaction from the ducks or the sheep, Burnes said it’s obvious the owl has been doing this for quite some time. And he’s more than happy for the owl to enjoy a rat-based meal since it’s providing a natural pest control.

Burnes knows the Maine woods are full of owls, but as they are nocturnal and elusive, he said he has seen maybe two in his life. He’s hoping it sticks around all winter.

“My guess is it’s a juvenile owl born in this area,” Burnes said. “I am thinking it’s not going anywhere because it’s figured out we have a bloom in our rat population and it knows what side its bread — or rat — is buttered on.”

The family is asking friends and customers for name suggestions for the owl on the farm’s Facebook page.

Making a living on an organic small family farm can be tough, Burnes said. Things like an owl making friends with the sheep and ducks makes it worth it.

“Every time you can look out a window and see something like this owl it washes away any frustrations or bad feelings,” Burnes said. “It feels like such a gift.”