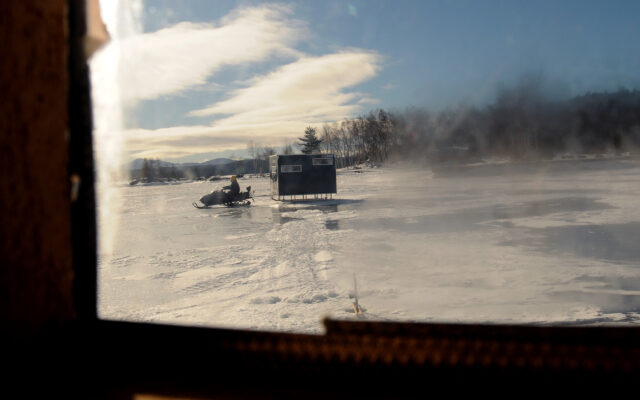 Contributed • November 14, 2021
By Sam Schipani, Bangor Daily News Staff Maine without ice fishing, snowmobiling, cross country skiing and dogsledding hardly seems like the state we know — but that may be a reality outdoor enthusiasts are facing with warming winters.  With compromised conditions, outdoor recreationists are trying to make the most of their favorite winter sports, but it is getting increasingly harder for certain activities to persist.

Maine without ice fishing, snowmobiling, cross country skiing and dogsledding hardly seems like the state we know — but that may be a reality outdoor enthusiasts are facing with warming winters.

With compromised conditions, outdoor recreationists are trying to make the most of their favorite winter sports, but it is getting increasingly harder for certain activities to persist.

According to the 2020 Maine’s Climate Future report published by the University of Maine, winter is the state’s fastest warming season, meaning more precipitation is falling as rain instead of snow. The statewide average annual snowfall is estimated to have decreased by about 17 percent over the last century.

Snowmobiling last winter was perhaps more popular than ever as everyone was looking to get outdoors by booking rides and buying machines, Al Swett, vice president of the Maine Snowmobile Association, said. But the limited snow conditions made the sport more difficult and some snowmobile clubs’ major events got scaled back.

“We [had] a few good storms and then it warms up to 45 degrees and all the hard work the groom operators do the night before and the nights following just deteriorates really quickly,” Swett said. “The packed snowmobile trails get soft in a hurry.”

Ice fishing also has been suffering over the past few years. Several events, such as the Sebago Lake Ice Fishing Derby in 2016 and the Moosehead Lake Togue Derby in 2021 have been canceled or rearranged because lakes haven’t frozen.

Mushers have also been feeling the impact of warmer weather. Jill Carter, president of the Maine Highlands Sled Dog Club, said that while events like the Can-Am Crown International Sled Dog Race in Fort Kent are still reliably held, many smaller events have been canceled in recent years due to melting, refreezing or not enough snowpack.

If winter conditions continue to warm, the impact could go beyond a lack of winter fun. Outdoor recreation is essential to Maine’s winter tourism economy which makes up 25 percent of the state’s annual earnings, according to the Maine Tourism Association.

“People are going to go where the snow is and where the trails are, there’s no question about it,” said Tony Cameron, CEO of Maine Tourism Association. “It has huge ramifications like any other parts of the industry. There’s a huge trickle-down effect to local economies and the state economy.”

For winter sports especially, small towns might have the most to lose. A 2020 study by the Maine Snowmobile Association and the University of Maine showed that the contribution of snowmobiling to Maine’s economy was more than $606 million.

“These little towns count on snowmobilers,” Swett said. “With the warm weather, those little businesses don’t make it, they don’t survive. They count on us to be there to stop in for a cup of tea or a coffee or to get gas in a remote location.”

Many Mainers also make a living off of the outdoors. Polly Mahoney and Kevin Slater have owned Mahoosuc Guide Service in Newry, which runs sled dog rides, for 31 years.

Because of the demand for outdoor recreation due to the pandemic, business has still been good for them. However, they are worried about the years to come.

Last year, they lost two weeks of guiding business in the winter because the temperatures warmed up faster than usual, Slater said. It also poured on Christmas day, causing the business to reschedule bookings during one of the busiest times of the year due to the lack of snow, Mahoney said.

Winter outdoor recreation clubs and businesses are doing their best to make the most of the warmer winters, though. Swett said the volunteer trail groomers in snowmobile clubs, through years of experience, have been able to figure out how to make even limited snow conditions rideable. But he knows that fewer groomers will be willing to take the risk of damaging their equipment if winters worsen.

Cyndy Bell, public relations manager of the Sebago Lake Rotary, said the group made the decision to expand its annual ice fishing derby to include surrounding lakes to save the event from being canceled.

That strategy hasn’t always been foolproof, though. The derby was still canceled in 2016 because of ice conditions.

“We’re not worried about it yet, but obviously it’s always in the back of our minds,” Bell said. “We hope that there’s always sufficient freezing to make sure enough of those lakes and ponds would keep the event viable.”

Carter said she has seen some clubs move toward dry-land sled dog racing as snow disappears.

“The problem with dry-land is you have to have pretty good conditions for that, too,” Carter said. “You can’t have snowpack and then melt and then it’s all mud.”

Winter recreators are continuing to find ways to make their favorite activities possible during warming winters, but they are aware of the reality.

“If we don’t get snow, we’re in trouble,” Swett said. “That’s the bottom line at the end of the day. We rely on Mother Nature.”