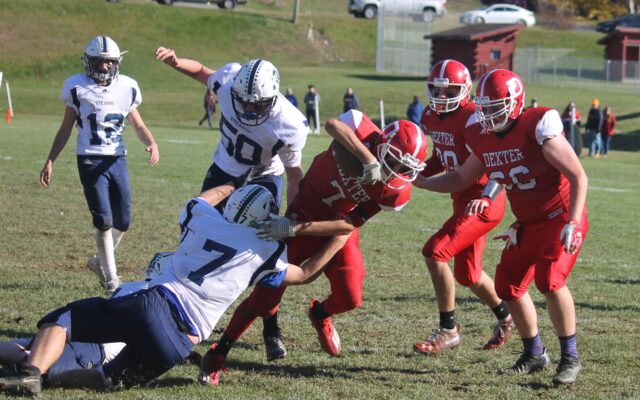 Contributed • November 12, 2021
By Ernie Clark, Bangor Daily News Staff Two weekends of high school football state finals begin Saturday with championship games in the 8-player version of the sport set for Fitzpatrick Stadium in Portland. The doubleheader kicks off at 11 a.

Two weekends of high school football state finals begin Saturday with championship games in the 8-player version of the sport set for Fitzpatrick Stadium in Portland.

The doubleheader kicks off at 11 a.m. with the large-school title game between Waterville and No. 1 Cheverus of Portland.

The small-school final between Dexter and Maranacook of Readfield follows at 2:30 p.m.

The doubling of 8-player state championship games from its inaugural season in Maine in 2019 reflects the fast growth in the number of participating schools. This year, there are 25 teams compared to 10 two years ago when large-school champion Mt. Ararat of Topsham defeated small-school winner Old Orchard Beach 58-25 for the lone state title awarded.

While both regional top seeds advanced to this year’s large-school state final, none of the top two seeds in the North and South reached the small-school gold-ball game.

Dexter seeks its first championship since winning the 1987 Class C crown. Maranacook won its lone state championship as a Class D program in 1981.

“It’s been a crazy journey,” Dexter head coach Andrew Shorey said. “To miss a couple of games and finish like this, these kids never hung their heads once and just kept working hard whenever we could have practice and have everybody there.”

While Dexter is new to the 8-player ranks, Maranacook was one of the original 8-player teams in 2019 and reached the large-school final, falling to Mt. Ararat.

Maranacook’s first two games this season were canceled due to COVID-19, then the Black Bears opened with back-to-back losses to the eventual top two seeds in the South, No. 2 Dirigo of Dixfield (30-14) and No. 1 Telstar of Bethel (14-12).

Coach Jordan DeMillo’s club has won five of six games since then, with the only loss to 8-player large-school South finalist Mt. Ararat/Hyde.

Maranacook has averaged 45 points in postseason victories over Old Orchard Beach, Telstar and Dirigo. Perhaps even more impressively, the Black Bears limited Telstar and Dirigo to 6 and 7 points, respectively, during the last two weeks while advancing to the state final.

Dexter also came up with its strongest defensive performance of the season in its regional final, a 22-6 win over No. 4 Stearns-Schenck. That followed earlier postseason victories against No. 6 Orono and No. 2 Houlton when the Tigers’ offense scored 55.5 points per game.

The Tigers also lost two regular-season games to COVID-19 in Weeks 3 and 4 but, like Maranacook, reached the state final with five victories in their last six outings.

“We’ve had so much adversity between quarantining and everything getting shut down,” said Dexter junior quarterback and defensive back Bryce Connor, who rushed for 127 yards and two touchdowns in the North final. “We only had five regular-season games, but it’s been amazing to be able to play football, especially with not having a season last year.”

Dexter amassed 406 yards on the ground during its 60-32 semifinal win at Houlton behind senior Nathan Schobel (17 carries, 307 yards). When Schobel was sidelined due to injury last week, Connor and senior running back Avery Gagnon combined for 234 of the team’s 287 rushing yards against Stearns-Schenck.

In the large-school ranks, Cheverus (7-0) is riding a streak of four consecutive shutout victories into its state final, including a 44-0 victory over Lake Region in the South semifinals and a 48-0 stoppage of Mt. Ararat/Hyde in last week’s regional final.

The Stags, whose roster numbers a robust 43 players, have outscored their opponents by a combined 322-48 this fall.

Waterville (7-1) has survived a more challenging postseason to date, outscoring Mount Desert Island of Bar Harbor 50-40 in the North semifinals and edging Morse of Bath 22-20 in the title game.

Led by senior quarterback Liam Von Oesen, the Panthers have averaged 46.5 points, compared to 46.0 points per outing for Cheverus.