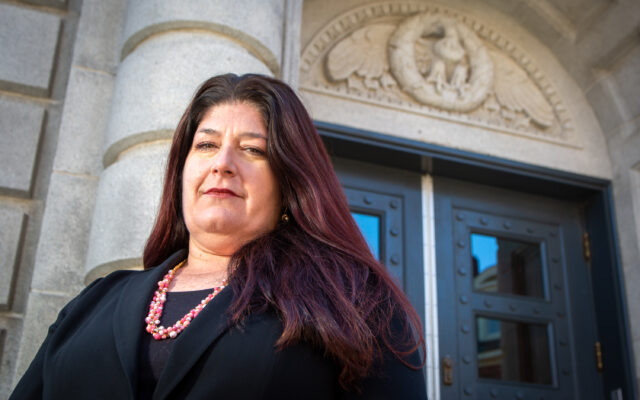 Maine’s new U.S. Attorney Darcie McElwee decided in her early teens that she wanted to be a prosecutor after watching her dad, Aroostook County District Attorney John McElwee, do his job.

“My dad would stand in front of that jury, all eyes on him, jurors listening intently, with him telling this story about someone else’s life,” she said during an interview in Bangor. “It seemed almost like a play coming to life and it had such impact and importance.

“I thought, I want to do that,” she continued. “It seems like what he’s doing matters a great deal to other people. It seems like he’s respected and he’s helping others.”

Now, McElwee is a month into her tenure as Maine’s top federal prosecutor after President Joe Biden nominated her to the post in August and the U.S. Senate confirmed her on Oct. 5. As the Department of Justice’s top official in Maine, she’ll be charged with carrying out the Biden administration’s priorities here — namely, prosecutions of domestic terrorism and hate crimes, gun crimes, human trafficking and interstate drug trafficking. While working on those priorities, she also brings a focus on a crime her office doesn’t even prosecute — domestic violence.

McElwee decided to apply for the job after Biden won last year and she knew her predecessor, Halsey Frank, would have to move on. She’d thought about applying for the position toward the end of her career since it’s a political appointment dependent on who is in the White House, but the coronavirus pandemic changed McElwee’s thinking.

“The pandemic shifted everything for me,” she said. “Life looked completely different and I just wanted to lean in. I thought this was going to be such a fascinating and rewarding time to be at the table to talk about law enforcement and race and domestic terrorism and political violence.”

McElwee plans to hire an outreach development specialist to focus on those topics and fostering trust between law enforcement and vulnerable communities.

“I want to personally engage with these communities to learn more about whether they feel safe living in Maine,” she said. “Our country and state face unprecedented times, with political and cultural differences sharply dividing the population across Maine. I look forward to reaching across this divide to foster unity.”

As McElwee looks toward carrying out Biden administration priorities in Maine, she noted that the FBI has documented a rise in hate crimes since the pandemic. In addition, Maine is seeing a spike in complaints about strangers contacting teenage girls online with sexual messages. Maine also continues to be a source for guns in southern New England and New York, where gun laws are stricter, according to McElwee. Those gun purchases often are related to drug trafficking, she said.

McElwee said she wants her office to be open, visible and involved in community education. Those efforts most likely will involve resources for schools and civil rights teams about hate crimes and bullying, and resources for parents concerning exploitation of children, particularly online.

That kind of an outreach role is familiar to McElwee, who began her career as a federal prosecutor working with school districts and students throughout Maine on decreasing gun violence in schools. She served as coordinator of Project Sentry — a Department of Justice initiative in the wake of the 1999 Columbine school shooting — in Maine from 2002 to 2004.

While she’s tasked with implementing national priorities in Maine, McElwee has her eye on a crime her office doesn’t even prosecute: domestic violence, which she said is the No. 1 crime in Maine. While domestic violence prosecutions happen at the state level, the U.S. Attorney’s office can and does prosecute people who have been convicted of the misdemeanor crime of domestic assault who illegally possess guns. The office also prosecutes interstate stalking cases.

“Sometimes a domestic violence offender has never been held accountable until that defendant receives a substantial sentence in federal court” for a firearms violation, McElwee said. “That gives the victim some time to heal and some time to breathe.”

In addition to her father, McElwee named R. Christopher Almy, the former district attorney of Penobscot and Piscataquis counties and her first boss, and former U.S. Attorney Paula Silsby as mentors.

When her nomination was announced, Almy called her “a crackerjack and a ball of fire.”

“She always does the right thing”, he said. “She’s all about being fair and being tough.”

Silsby, who hired her almost 20 years ago, said McElwee’s most important qualities are her integrity and sense of fairness.

“The interest of the United States Attorney in a criminal prosecution is not to win but to see that justice is done,” Silsby said, paraphrasing a Supreme Court justice’s opinion from 1935. “This applies equally to all matters handled by the U.S. Attorney’s office. Darcie conducts herself in accordance with this responsibility.”

McElwee is a graduate of Caribou High School, where she played basketball and was on the cross-country team. In 1991, she earned the title of Potato Blossom Queen.

She graduated from Bowdoin College in 1995 and the University of Maine School of Law in 1998. Her father served as a District Court judge in Aroostook County from 2000 until his retirement in 2009. Her mother, Carol McElwee, was an English teacher before serving in the Maine House from 2012 to 2018.