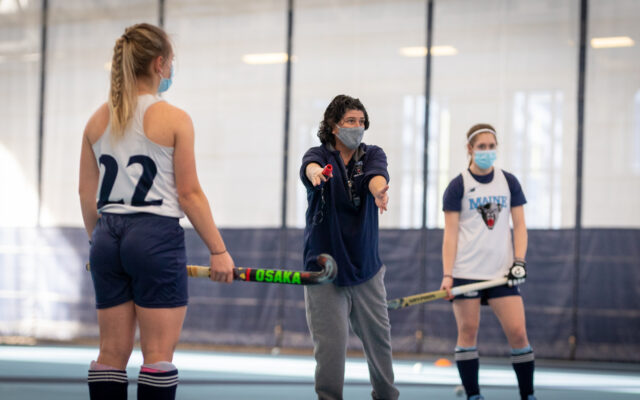 ‘This is everything.’ Cheering for UMaine field hockey in their first national championship tournament appearance

The Black Bears play the RedHawks of Miami University in Oxford, Ohio on Wednesday in the first round of the NCAA Division I field hockey championship tournament.

“I just want to go out there and show everyone that Maine is a great school and it’s a great place to play. Just the chemistry we have, I just want everyone to see that,” goalie Mia Borley told WFVX TV after Sunday’s game, which was played before the biggest crowd ever for a field hockey game at UMaine. Borley was chosen as the tournament’s most outstanding player.

The Black Bears beat the University of California by a score of 2-1 on Friday to advance to the championship game. It was the team’s 14th consecutive appearance in the America East playoffs, but the first time they came out on top.

“This is everything. It doesn’t feel real right now,” forward Brooke Sulinski, who grew up in Old Town and dreamed of playing at UMaine, told the BDN. “I’m just really proud of this team. I knew we could do it. I’m proud of what we accomplished and I’m really thankful.”

The team has nine Maine players on its 20-person roster, including Abby Webber of Garland — a graduate of Dexter Regional High School

“It means everything to bring the trophy home,” said UMaine back Hannah Abbott from Portland, who played at Cheverus High School. “We have always known that we’re a great program and this really shows that we can do it. It puts Maine on the map once again.”

The team and its coaches also won several conference awards.

Borley and Mascarenhas earned spots on the All-America East first team along with teammates Chloe Walton and Poppy Lambert. Maine had the most players chosen for the conference team.

Mascarenhas, Lambert and Sydney Meader were chosen for the conference’s All-Academic team. Meader is from Boothbay Harbor.

In both cases, these student athletes are giving Maine plenty to cheer about.