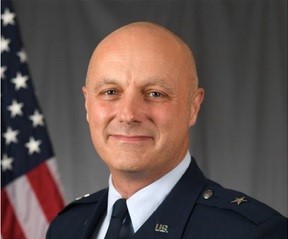 By Emily Adams
WASHINGTON, D.C. — A former farm boy from Atkinson is now a one-star general in the U.S. Air Force.

Robert “Bobby” Kinney, 50, was promoted from colonel to brigadier general at a ceremony July 9 at Joint Base Anacostia-Bolling in Washington, D.C.

Piscataquis County Sheriff’’s Office Chief Deputy Todd Lyford, who was chief of police in Milo where Kinney was a local police officer, flew down for the event. Also in attendance was Kinney’s great aunt Ruth Flowers, several cousins from Rhode Island, and cousin Maj. (retired) Douglas Kinney and his wife, Lyliane, both from Belgium.

Much of Kinney’s career has specialized in the Air Force’s intelligence, surveillance and reconnaissance (ISR) enterprise.

In 2017, he became one of the very few non-aviators in Air Force history to be named a wing commander of a flying unit. A full colonel at that time, he commanded the 1,000-member 188th Wing, Ebbing Air National Guard Base in Fort Smith, Arkansas. The base conducts worldwide 24/7/365 attack and intelligence surveillance and reconnaissance missions with the MQ-9 Predator remotely piloted aircraft.

After serving as wing commander, Kinney served as the missions director at the Joint Artificial Intelligence Center at Arlington, Virginia. There he was responsible for leading a multi-service, joint interdisciplinary team that was responsible for Department-of-Defense-wide fielding of high impact artificial intelligence programs and applying them to warfighting.

He currently travels between Washington, DC, and the Republic of Korea as the Wartime Director for Intelligence, J2, United States Forces Korea, Yongsan Army Garrison in Seoul, according to his biography. In this capacity he assists the director of intelligence in leading a team of nearly 400 intelligence professionals in executing operations, developing plans and formulating policies that support the Commander United Nations Command, Combined Forces Command and the United States Forces Korea.

Kinney has served at the Office of the Secretary of Defense and National Guard Bureau levels where he was “instrumental” in the stand-up of more than 20 Air National Guard intelligence, surveillance, and reconnaissance units, his biography states. He has served “extensively in the Air Force ISR enterprise, tactical and mobility flying operations.” Earlier in his career, he served in local law enforcement including the Milo, Brownville, and Dover-Foxcroft police departments and Piscataquis County Sheriff’s Office.

Kinney’s father, a former dairy farmer and retired master sergeant from the Maine Air National Guard, commented wryly that he cannot take credit for his son’s achievements, since he’s been gone for 32 years, but says his son’s chores on the farm, which then had dairy cows, helped forge his son’s work ethic. Kinney’s mother, a former secretary at Penquis Valley High School in Milo, described her son as “a go-getter” who also puts people at ease. He “just has a way with people,” she said. “He’s just Bobby Kinney” and that might be why people want to work for him. “And that’s not just his mother talking.”

His career has included deployments to Iraq and Afghanistan and has required him to move to Texas, Kansas, Florida, California, Idaho, Massachusetts, Virginia, Maryland, Arkansas, and Pennsylvania.