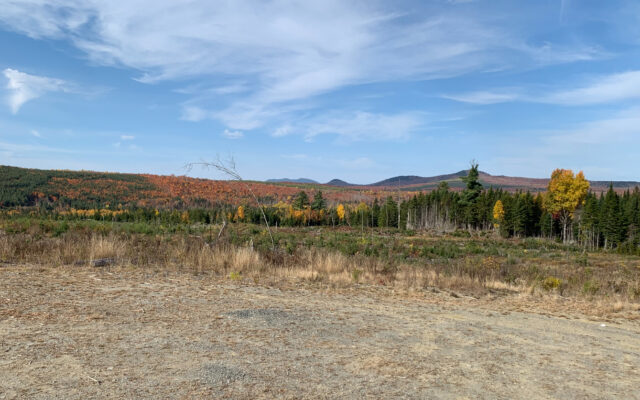 Contributed • October 16, 2021
By Pete Warner, Bangor Daily News Staff It is always invigorating to pack up the Subaru and head north in October. Whether to accompany my buddies on a moose hunt or spend a few days looking for grouse, it has become an annual tradition for our group.

It is always invigorating to pack up the Subaru and head north in October.

Whether to accompany my buddies on a moose hunt or spend a few days looking for grouse, it has become an annual tradition for our group.

Against a backdrop of brilliant fall foliage, it was an invigorating drive up Route 15 through Greenville and past Rockwood on Sunday.

But this time around, things were different.

Rather than pull into the familiar camp on Brassua Lake, the home base for previous adventures, we continued north to Jackman.

Through the generosity of Earle Hannigan of Holden and later his grand-nephew, Rob Hannigan of South Portland, the Brassua camp had been a regular hunting stop.

This year, Rob was fortunate to draw a moose permit and swap it for one in Wildlife Management District 8 for the second week of the season. He would have his own crew at camp.

Speeding past the driveway at 55 mph was the first significant reminder that times are changing for our cohesive group.

My older son William was riding shotgun and was eager for his first moose hunting experience. We brought along our shotguns, just in case we stumbled across some grouse.

Leading the convoy were brothers Tim Lander of Eddington and Billy Lander of Dedham, the moose permit holder and subpermittee, respectively. Both are mainstays of the group.

Tim was drawn for the first time after decades of attempts. He enlisted the help of a friend, Emily Anderson, who graciously agreed to allow us to stay at her home in Jackman.

Outdoors contributor and former Bangor Daily News Outdoors Editor John Holyoke of Brewer came along for a brief stay. John is pursuing a master’s degree in secondary education at UMaine and is on track to becoming a high school English teacher.

Conspicuous by his absence was the perennial lynchpin of the operation — and chef extraordinaire — Chris Lander of Orrington. He was, as we like to say, “out,’’ as he and his lovely wife Beth were belatedly celebrating their 30th anniversary in South Carolina.

We arrived at Emily’s log cabin, where we unhooked the trailer and unloaded our gear before heading out to do some scouting. There was one good sign as Tim and Billy saw a small bull moose cross the road late in the day.

Nobody could have imagined it would be the last sighting of a live moose until after legal shooting hours on Wednesday.

On Sunday night, Billy grilled up some delicious ribeye steaks and we had big baked potatoes.

The Landers had scouted extensively and had a familiar spot picked out to set up and call on opening morning. We arrived in the fog to find other hunters practically surrounding the location.

We instead made the rounds to several other known moose haunts and good-looking habitats. Nada.

John, who 15 years ago was instrumental in assembling our small band of hunting enthusiasts for his first moose hunt, headed home Monday evening. Another first.

The rest of us feasted on Billy’s tasty spaghetti sauce featuring moose and sausage.

On Tuesday we explored and staked out some seemingly promising spots. Tim was forced to switch firearms after his Thompson Arms .270 rifle unexpectedly experienced a catastrophic mechanical failure.

He was fortunate to find a box of ammo at Jackman Hardware to use with his backup gun.

We spent all day on and around the roads that yielded no moose, a few grouse sightings, warm temperatures and gorgeous scenery.

Energy levels were slightly diminished but enthusiasm remained high on Wednesday as we ventured out again. We tried some new places.

Temperatures climbed into the low 70s, likely forcing the moose into the dark growth or a wetland where they could cool off. That helps explain the brief glimpse of an antler paddle Tim spotted at the back of a cut. We couldn’t coax it into the open.

Later in the morning, after acquiring a cell signal, Tim received a message from Emily. Hours earlier, she had seen two bull moose on her way to work.

Finally, around noon, we saw a moose. This bull had been shot by Justin Nichols of Dixmont, who was hunting with his subpermittee, Massachusetts resident Joe Goyette.

They had set up a blind down off the edge of a large chopping and harvested the moose early in the morning. After using a chainsaw winch to drag the animal up out of the depression, they were towing it the final 75 yards across the slash in a sawed-off canoe.

Still stymied, Tim and Billy spent the last few hours of daylight calling near the spot where Emily had seen the bulls some eight hours earlier. No go.

With a heaping crockpot of “Billy Chili” warming, Will and I reluctantly were forced to pack up our belongings. He was headed on a previously scheduled trip to Baxter State Park and I had to return to work and home responsibilities.

I had expected we would have a moose down by Wednesday, but it hadn’t been in the cards.

I felt guilty. We were leaving Tim and Bill to fend for themselves.

While their hunting skills were never in doubt, the logistics of getting a moose out, on the truck and to the tagging station at Bishop’s Store would fall to them.

I was always the Sherpa, the gofer, if you will. It’s a role I cherish. And now I was leaving.

I couldn’t help worrying about what complications might arise and that I wouldn’t be there to help.

On previous hunts, there were always four or five of us in camp. Plenty of manpower. Now, the dynamics were different.

With the clock ticking and the pressure mounting, they kept working and searching for an opportunity to harvest a moose.

All I could do in the meantime was wish them luck.