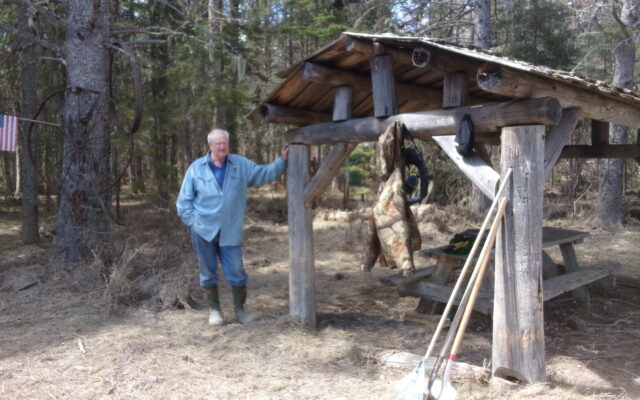 Contributed • October 10, 2021
By Joseph Cyr, Houlton Pioneer Times Staff HOULTON — Albro “Al” Cowperthwaite of Houlton knew at a fairly young age that he was destined to spend time in the woods. Little did he know then that his passion for all things outdoors would lead him to a 45-year career working in the North Maine Woods, including 39 years as its executive director.

HOULTON — Albro “Al” Cowperthwaite of Houlton knew at a fairly young age that he was destined to spend time in the woods.

Little did he know then that his passion for all things outdoors would lead him to a 45-year career working in the North Maine Woods, including 39 years as its executive director. Cowperthwaite, 67, of Houlton retired as the head of the North Maine Woods at the end of September.

The North Maine Woods is primarily managed forestland that also supports all types of outdoor recreation. The more than 3.5 million acres includes the St. John River and the Allagash Wilderness Waterway, among other areas popular with outdoor enthusiasts. The executive director oversees and manages the public access and recreational use of the area.

“I loved to hunt and fish growing up,” he said. “We had a family camp and I was just always outdoors. I remember telling one of my friends when we were in high school that ‘Somehow I have got to make a living out of this fishing and outdoors stuff.’”

Cowperthwaite did precisely that, landing an internship in the summer of 1976 for the North Maine Woods as part of his education in forestry management at the University of Maine at Orono.

“When I got done with college, the state was doing an inventory of all the development in the unorganized townships,” he said. “My job was to go to these areas, with a milk crate full of aerial photographs, and document where the roads and openings were.”

His work often included detailed information on any camps that were located in the area, down to what color the buildings were, whether there were any outhouses and sheds, and how far apart they were.

Back in those days, there were no GPS devices or smartphones to let Cowperthwaite know exactly where he was, and on more than one occasion he would find himself somewhere other than where he was supposed to be.

Cowperthwaite spent 13 weeks — from June 1 to the end of November — cataloguing these structures. Many nights were spent sleeping in his automobile — a Toyota Land Cruiser station wagon outfitted with a stove and mini-fridge — to save both time and money.

“It was big enough for me to lie down in, so I could sleep,” he said. “That thing was like a tank. I would find a place to stay, often near a lake so I could use my canoe. It was an incredible experience.”

If the lake happened to be big enough, Cowperthwaite said he would take the battery out of his vehicle and use it to power an electric motor for his canoe.

“I always made sure to park on a hill, so that way if the battery was dead, I could start [the car] rolling and pop the clutch to start it,” he joked.

The history of the North Maine Woods is complicated. It evolved from a landowner committee in the mid-1960s to an official organization in 1971 that manages access and recreational opportunities for more than 3.5 million acres of land predominantly in northwest Maine, according to the North Maine Woods website,

In 1975, the association changed to a partnership and North Maine Woods became a non-profit corporation under Maine law in 1981.

“Al’s retirement is a big loss to all those who work in, use, and enjoy the North Maine Woods,” forester Dan Jacobs of Littleton said. “Fortunately, Al has positioned the organization for continued success for years to come.”

Gov. Janet Mills commemorated Cowperthwaite’s work in a letter to him, touting his 45 years of commitment to land conservation and public access, and telling him he should be proud of developing a model for collaboration in the working forest.

“From managing 3.5 million acres of private land for public use, to creating the Sportsman/Forest Landowner Alliance, you have provided steady leadership of the North Maine Woods, ensuring that outdoor enthusiasts, landowners and forest-product companies can peacefully coexist,” she said.

One of Cowperthwaite’s crowning achievements as the executive director was increasing the general public’s access to massive tracts of private property. For years, the logging roads in the North Maine Woods were gated and locked, with only those in the logging industry able to access them.

Today, many of those roads are open to the public, providing access to Maine’s outdoor heritage for generations to come.

“In large part, Al is the reason that the organization has been so successful over the past four-plus decades,” Jacobs said. “With Al’s leadership, the North Maine Woods is a shining example of how active forest management and traditional recreational uses can exist together in northern Maine.”

“It’s a real balancing act,” Cowperthwaite said. “It’s not about the money, it’s about the privilege of using the land.”

The one change that he wishes had not taken place is the amount of time today’s youth spend in the great outdoors.

“There has been a demographic change with more single-parent families, so today it is more difficult for kids to get outside and just be kids,” Cowperthwaite said. “When I was young, we would be gone all day, but today with kids involved in so many organized activities, it’s not the same.”