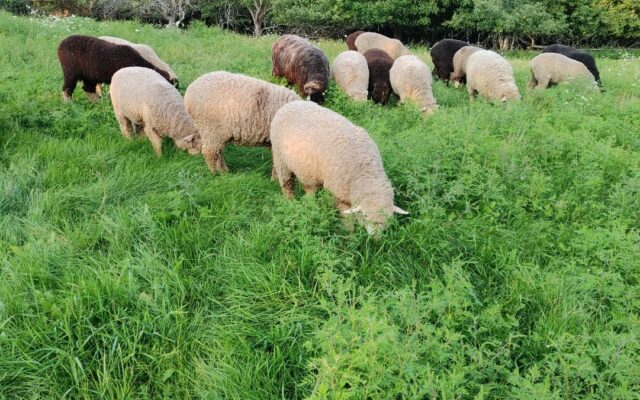 Take these steps now to protect your livestock from being stolen

Contributed • October 2, 2021
By Julia Bayly, Bangor Daily News Staff Before a flock of sheep was stolen from — and then returned to —  a central Maine farm recently, Kathryn Piper never would have given the parked van a second thought. But as she pulled out of her driveway, Piper said she could not help but wonder if the van’s occupants were casing her own small flock of sheep on her family farm.

Before a flock of sheep was stolen from — and then returned to —  a central Maine farm recently, Kathryn Piper never would have given the parked van a second thought. But as she pulled out of her driveway, Piper said she could not help but wonder if the van’s occupants were casing her own small flock of sheep on her family farm.

“It has never crossed my mind before that someone might steal my sheep,” said Piper, who has a 12-acre farm. “But we are heading into difficult times with meat shortages and food shortages, so theft is not something I don’t see happening.”

There are no official records or data kept on livestock theft in Maine. As a crime, it’s lumped in with property theft, so in the eyes of the law a stolen sheep, goat or cow is no different than a stolen car or stereo.

But there are things farmers and livestock keepers can do to better protect them from theft or wandering off. Measures, according to law enforcement officials, include getting your animals microchipped, installing security cameras or using livestock guard dogs.

Neal, who raises goats on her farm in Garland, launched a massive online search through social media when she heard about the 22 sheep stolen from Susan Watson’s farm. Her efforts quite likely helped lead to the identification of a truck and trailer that had been seen loading the sheep up directly from Watson’s barn.

After that information was given to the Maine State Police trooper investigating the theft and posted on social media, the sheep were returned when Watson was not at home.

Since the sheep were back where they belong and since the investigating officer had exhausted all leads in the case, the investigation is now inactive pending any new information or developments, according to Maine Department of Public Safety spokesperson Shannon Moss.

“I definitely think reporting livestock theft to the police is important,” Neal said. “But I almost think contacting your Facebook groups is a more efficient way to get the word out quickly.”

In Maine, issues around animal abuse or neglect come under the Maine Department of Agriculture, Conservation and Forestry’s department of animal welfare. Tracking down livestock rustlers, though, does not.

“It’s a property issue,” according to Liam Hughes, director of the Maine animal welfare department. “We do not have any laws that cover rustlers and there is no sheriff on horseback to ride off after them.”

Hughes recommended livestock owners be aware of where their animals are at all times.

“The best thing is to make sure to check your property on a regular basis,” Hughes said. “Make sure your fence is in good working order because there can be cases where animals do escape.”

He also urges people to have their livestock — and pets — microchipped.

Microchips are tiny transponders that a veterinarian can implant under an animal’s skin. The transponder contains information about the animal and its owner.

“A microchip is like having a [vehicle identification number] for your animal,” Hughes said. “It’s a permanent record of who owns it.”

Hughes suggested photographing individual animals and making a record of identifying characteristics and markings. That way, should they turn up missing, you have a good way to identify them when they are recovered.

Livestock guardian dogs are also an option, he said.

In addition, it’s not a bad idea to install security cameras or game cameras around pastures or barns to record anything that happens when you can’t be around in person.

Piper’s farm is small and some of the sheep are pastured out of sight from her house. The current family budget has no funds for remote cameras, she said. For a time the family did post two livestock guardian dogs in with the sheep, but removed them after people at a house near the pasture complained about the dogs’ barking.

“We are just going to have to try to keep an eye on things,” Piper said. “I really never thought we’d have to worry about this.”

Following the theft of the Watson sheep, and after hearing anecdotal stories of other livestock thefts in Maine, Neal is on a mission. She wants to get a system in place to supplement law enforcement. She envisions a sort of 911 calling tree combined with an old fashioned neighborhood watch.

“I have been in touch with local law enforcement and animal control officers and a veterinarian and they all like the idea,” Neal said. “Now I just need to come up with how to execute it.”

Neal envisions an online list or spreadsheet shared with as many people as possible. In the event livestock escape or are stolen, participants would each call designated auction houses, processing facilities or any other place at which stolen livestock could end up.

Others would scour online advertisements in places like Craigslist or Facebook Marketplace to see if livestock matching the description of those missing turned up for sale.

“If enough people are involved doing this, thieves will learn they have no place to sell stolen animals,” Neal said. “If they can’t turn around and sell them, stealing them would be a lost cause.”

On the ground, Neal would like to see neighbors working together to keep an eye on each other’s livestock.

“People could let their neighbors know if they are going to be gone and that no one is expected to be around,” she said. “That way if someone sees someone on your property with your animals, they could report it right away.”

In the case of Watson’s stolen sheep, the neighbors who saw them being loaded into a trailer and driven away had no reason to think anything out of the ordinary was going on.

That kind of vigilance would be very helpful to avoid future livestock thefts, Hughes said.

“The thing about animal crimes is, we have mute victims and mute witnesses,” Hughes said. “I have yet to have one animal tell me what happened.”