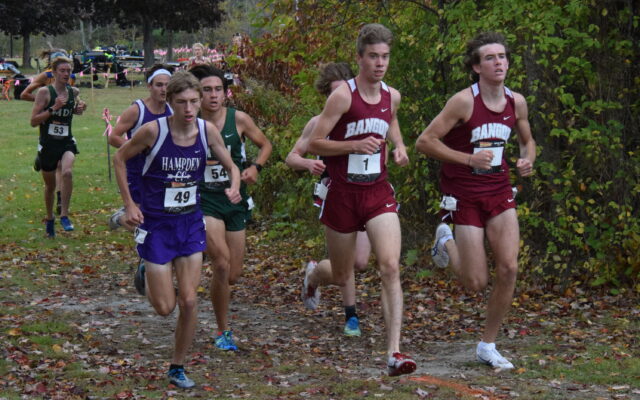 Contributed • October 1, 2021
By Ernie Clark, Bangor Daily News Staff The Maine Cross Country Festival of Champions will still be feeling some effects of COVID-19 when the 20th edition of the state’s largest high school cross country meet is held Saturday at the Troy Howard Middle School in Belfast. But the comeback from last October’s limited event is well underway.

The Maine Cross Country Festival of Champions will still be feeling some effects of COVID-19 when the 20th edition of the state’s largest high school cross country meet is held Saturday at the Troy Howard Middle School in Belfast.

But the comeback from last October’s limited event is well underway.

Seventy-seven schools — including Dexter Regional High School and Foxcroft Academy — and approximately 1,400 runners are expected to participate in the six-race running extravaganza. It begins at 11 a.m. with races for the unseeded girls and boys runners, followed by freshman races beginning at 12:20 p.m. and concluding with the girls seeded race at 1:40 p.m. and the boys seeded race at 2:20 p.m..

That’s a far cry from the 2020 races, which involved just 10 boys teams and nine girls teams that had participated in each of the previous 18 festivals, and a total of 127 runners and no spectators due to the coronavirus.

“It was good that we were able to have it for the kids who were able to run in the race last year,” said event director Glendon Rand, also the cross country coach at Brewer High School. “But it was kind of depressing because the atmosphere just wasn’t there, so we’re super happy to bring it back to more or less full strength this year.”

While this year’s event should include most of the top boys and girls high school teams in Maine, it will lack the several Canadian teams that typically participate because the U.S.-Canadian border remains closed. In addition, just four schools from outside Maine will take part, down from approximately 10 schools annually before 2020, Rand said.

Maine’s representation also will be down, not because of the number of teams but because fewer runners are competing this year compared with pre-2020 levels.

Rand said that the reduced number of festival participants is similar to what he’s seen during the first half of Maine’s high school cross country season this fall.

“From the meets that we’ve gone to this year, my team’s down and pretty much everybody’s teams are down a little bit,” said Rand, who added that he suspects teams lost athletes to jobs or other activities they discovered last year.

“But I think teenagers crave being with their friends and those social interactions and the friendships and atmosphere that being on a team brings them, so I’m optimistic that it may take a couple of years but I think we’ll get back to where we were across all high school sports.”

Kennebec Valley Athletic Conference rivals Bangor and Brunswick should be among top contenders for the boys title.

Bangor is led by senior Daniel McCarthy, the only Maine boys’ cross country runner to complete 5 kilometers in under 15 minutes and 30 seconds so far this year, while Brunswick will be sparked by senior Joey Valliere and junior Eli Palmer.

Other individual threats include Connor Daigle of Medomak Valley in Waldoboro, Zachary Barry of Scarborough, Calvin Cummings of Gorham, Logan Ross of Falmouth and Chris Walton of Biddeford.

“If you were to make a list of the top 10 teams, I’d think we’d have seven or eight on both the boys and girls sides,” Rand said. “I think it’s going to be as competitive as it’s ever been, maybe down a little bit because of the loss of the Canadian schools but still really, really strong.”

An awards ceremony will follow the final race at 3 p.m. that this year will be held outside the school gymnasium as one concession to the lingering COVID-19 pandemic. Another is the addition of many more portable toilets than usual this year to accommodate the athletes and spectators.

“We did the things we felt we needed to do and are doing at other meets in Maine this year, which is spreading the teams out and keeping everybody outside,” Rand said.

“Most of the day you’re just hanging out with your team, which is what you’re doing in practice every day anyway. I feel really confident that it’s going to be safe.”