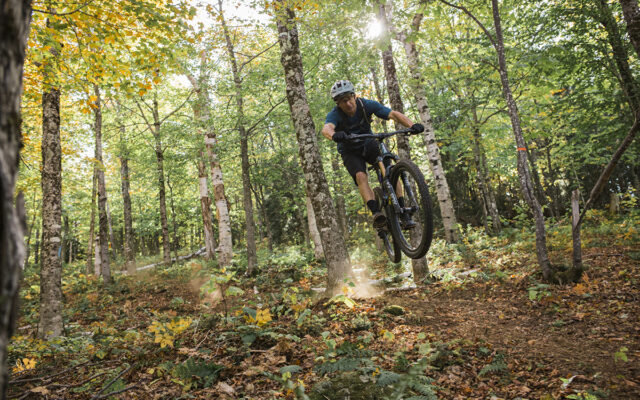 Contributed • September 14, 2021
By Ernie Clark, Bangor Daily News Staff Some 450 mountain bikers from along the East Coast converged on western Maine’s Sugarloaf mountain Sunday for the Eastern States Cup Box Showdown enduro and downhill races. And 14-year-old Kale Cushman of Old Town had one of the most successful days of any of the riders, winning her divisions in both disciplines.

Some 450 mountain bikers from along the East Coast converged on western Maine’s Sugarloaf mountain Sunday for the Eastern States Cup Box Showdown enduro and downhill races.

And 14-year-old Kale Cushman of Old Town had one of the most successful days of any of the riders, winning her divisions in both disciplines.

Cushman bested her competition in the pro women’s division of the MAXXIS ESC Enduro event, which featured four timed stages varying in steepness, length and difficulty depending on location. Between each stage, riders navigated untimed “transfer stages” that involved pedaling, hiking or chairlift riding.

Cushman finished in 21 minutes, 15.148 seconds, more than a half-minute ahead of Vermont rider Hannah Harrington, who finished second in 21:53.804.

“We’re proud of her,” said Adam Craig, the Maine native and former Olympic mountain biker who is spearheading Sugarloaf’s efforts to develop a competitive and recreational mountain-biking presence. “That’s a pretty good margin for 20 minutes of racing.”

Cushman also captured the pro expert/women’s division of the MAXXIS ESC Intense Downhill race with a time of 5:14.51 for the single timed stage that led riders from the top of the Tote Road ski trail to The Landing, located in front of the Sugarloaf Base Lodge.

Max Beaupre of Sutton, Massachusetts, won the pro men’s division of the enduro race in 16:53.157, followed by second-place Adam Morse of Burlington, Vermont, in 17:17.359.

Craig led the crew that constructed five new gravity-fed trails spanning approximately 10 miles with 2,000 vertical feet at Sugarloaf this summer for the Eastern States Cup’s debut on the mountain.

Sunday’s event marked the first time Sugarloaf hosted a weekend of elite-level mountain bike racing since the Widowmaker Challenge races of the 1990s. Sunday’s enduro competition also was a qualifying event for the Enduro World Series stop scheduled at Sugarloaf next August.

“Overall things went super well,” said Craig, who credited the Sugarloaf staff as well as volunteers from the Carrabassett Valley town trail crew and the Carrabassett Valley chapter of the New England Mountain Bike Association for their support.  “First-time events often have some operational challenges and had we had operational challenges, I don’t think anyone would have been that terribly surprised or faulted us too much.

“But it’s awesome that we didn’t.”