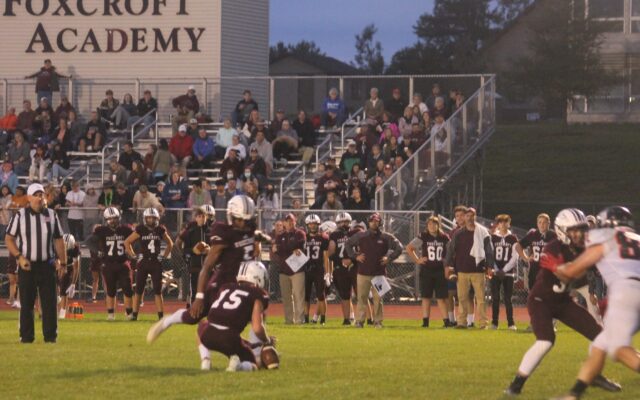 After lost pandemic season, linemen among the least prepared for the return of high school tackle football

Contributed • September 9, 2021
By Ernie Clark, Bangor Daily News Staff The long standing adage that the key to any football team’s success begins along the line of scrimmage may never be truer than it is at Maine’s interscholastic level this fall. When the 2020 tackle football season was canceled due to COVID-19, offensive and defensive linemen around the state had no games by which to measure their improvement like the backs and receivers had with 7-on-7 football.

The long standing adage that the key to any football team’s success begins along the line of scrimmage may never be truer than it is at Maine’s interscholastic level this fall.

When the 2020 tackle football season was canceled due to COVID-19, offensive and defensive linemen around the state had no games by which to measure their improvement like the backs and receivers had with 7-on-7 football.

“We did a couple of big-man competitions, we brought some weights outdoors and did creative things with weight training, and we did work on some technique like we did this summer,” Brewer High School head coach Scott Flagg said. “But it’s a lot different when you put pads and helmets on and start playing on the actual line of scrimmage in a game.”

Like their skill-position brethren, linemen are generally less experienced than usual this fall since no high school players began the 2021 season with more than two years of varsity experience.

“It certainly put them behind, there’s no question,” Foxcroft Academy football head coach Danny White said. “You just hoped [the linemen] are able to translate all of the instruction — which there wasn’t a ton of over the last year — and the film they’re able to watch and the coaching they’ve received so far in the preseason into being able to play at a physical level come Friday night.”

For White, the opening-night performance began to answer at least one question.

Another team that showed interior strength during Week 1 was Bangor during its 54-13 win at Brewer.

Joey Morrison rushed for 217 yards and Max Clark passed for 157 yards and four touchdowns  to tight end Colton Emerson, but the Rams also won the battle of the trenches while breaking a 7-7 tie with 21 unanswered second-quarter points.

Head coach Dave Morris appreciated the work of his linemen, especially given their lack of opportunity last fall.

“I think they definitely lost out because they just didn’t play in those positions last year except for the center, who snapped the ball and then was watching [7 on 7],” he said. “The other thing that was lost was because they didn’t play or practice, we did some things schematically during 7-on-7 to try to keep them going but it’s tough when there’s no test or game to put into play what you’re working on.”

Morris said the sidelining of tackle football in 2020 also denied coaches the chance to try out players from other positions on the line.

“This preseason we picked up three or four linemen who probably were running backs at one time but got bigger and stronger,” he said. “What we’re finding now is with those kids we’ve identified, maybe with last year they would already have a year under their belts instead of now only having a scrimmage and an exhibition game to get ready for Friday night.”

John Bapst of Bangor head coach Dan O’Connell understood Morris’ lament, particularly given the growing need to recruit linemen because most young football players dream of carrying the ball, not blocking for the ball carrier.

“We’ve got to get back to celebrating those positions in a way that makes it attractive to younger players, because I think if you talk to youth coaches they’re going to tell you it’s harder and harder to find linemen,” he said.

O’Connell, whose team must wait for its season opener until Sept. 11 at Freeport after COVID-19 cases and quarantines forced the cancellation of its Sept. 3 game against Oak Hill of Wales, acknowledges that the loss of the 2020 season wasn’t just to the linemen’s detriment, but to all players.

“That break of a year, regardless of position, didn’t allow us to see the natural progression of any high school team,” he said. “Without the year of padded, 11-man tackle football, I think all kids were at a disadvantage.”