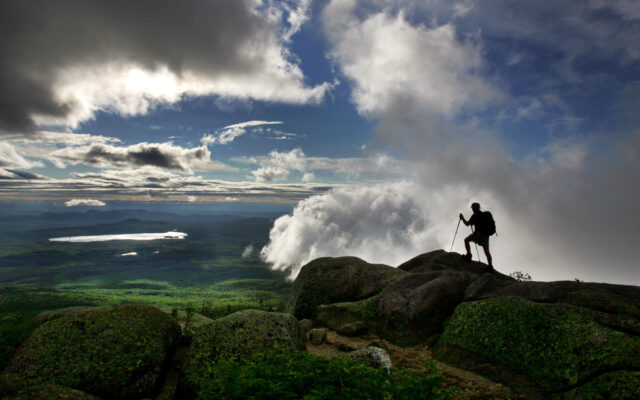 PORTLAND — With recent news of the B&M Baked Bean factory sale, the state’s long industrial canning tradition will soon come to an end.

Beginning in the 1850s, and reaching an apex during the Gilded Age, Maine was once dotted with dozens of fish, fruit and vegetable canning factories. Thousands of people were employed every year harvesting, preparing and preserving Maine’s seasonal bounty.

One such family fortune, built largely on canned corn, was later used to purchase Katahdin for the people of Maine.

This is how it happened — but first, let’s set the scene.

Portland cookstove manufacturer Nathan Winslow invented a safe, effective corn-canning method in the late 1830s. The now-familiar process first involved stripping kernels from the cob with a curved knife. Then, the corn was placed in a can, heated to kill bacteria and then sealed by hand.

By 1852, Winslow and his brother Isaac opened the first successful corn canning factory in the United States. Soon, they were wealthy and Maine became a center for the new industry, with other local firms getting in on the financial action.

“Maine’s abundant seaports, as well as its proximity to the large east coast cities, made the state a profitable place for canning operations,” notes an online exhibition about Maine canning history at the Maine Memory Network.

The network is a collaborative effort between the Maine Historical Society and smaller such organizations across the state.

Partners James P. Baxter and William G. Davis opened the Portland Packing Company in 1861. At first they only canned corn but quickly merged with the Harpswell firm Rumery & Burnham, branching out into fish and beef, too.

During the Civil War, the Portland Packing Company obtained lucrative contracts with the Union Army. Its founders, including James Baxter, became fabulously wealthy.

On a side note, after the war, George Burnham — formerly of Rumery & Burnham — left the combined company. Burnham then partnered with Charles Morrill. Their new venture included factories on Portland’s Franklin Street and another in Machiasport producing canned roast beef, mutton, pork, herring, clams and lobsters.

Now, back to the main story: Baxter was rich and getting richer.

In 1900, Maine’s Bureau of Industrial and Labor Statistics stated Maine ranked third in the nation in the volume of its packed sweet corn behind New York and Illinois. The report also noted that the state’s canning entire industry — including corn, sardines, clams, blueberries, beans, squash, pumpkin, apples, tomatoes, etc. — was more valuable than Maine’s slate, granite and ice industries combined.

Of the 68 canning factories in Maine that year, 13 were owned by the Portland Packing Company. In addition to Portland, towns with rival canning operations included Fryeburg, Norridgewock, Eastport, Hartford and St. Albans.

All of Maine’s preserving businesses, including Baxter’s, relied on cheap help.

The jobs, like most industrial work at the time, were not hourly. They were piecework. Laborers were paid per ear of corn shucked or fish gutted. Most vegetable-canning jobs only lasted just a month or two per year, at the end of the fall harvest. Mainer’s in the fish-canning business only made money when there were fish to pack.

“Between 80 and 100 people per season worked at George S. Jewett’s Norridgewock [canning] factory, with most wages being at the minimum allowed by law,” the Maine Memory Network states.

Many children toiled these jobs as well, in the days before meaningful labor regulations.

“The canning industry was second only to Maine’s cotton mills in the employment of children,” wrote Jane E. Radcliffe of the Maine State Museum in a 1985 paper on the subject.

In August 1911, photographer Lewis Hine visited a sardine canning factory in Eastport. Hine photographed the children there and wrote about them.

While little Erna and Byron, with the cut finger, didn’t make much money in those days before workplace safety standards or income taxes, owners like Baxter did.

He had a mansion on Portland’s Deering Street and a summer place on Mackworth Island in Falmouth, which he owned outright.  He was also elected Portland Mayor six times, helped found the city’s public library, reigned as president of the Maine Historical Society and developed the Back Cove boulevard which bears his name.

When James died, though he had a large family, he left most of his enormous wealth to Percival, allowing the youngest Baxter to concentrate on politics. He was later elected to both the Maine House and Senate.

In 1920, with the help of his brother, Sen. Rupert Baxter, Percival was elevated to Maine Senate President. The following year, Gov. Frederic Parkhurst died after just three weeks in office, making Percival Maine’s governor. He was elected outright once, as well.

While serving in Augusta, Percival — an avid outdoorsman — tried to convince legislators to purchase Katahdin, setting it aside for the public. Maine did not yet have a state park system. Legislators refused.

Instead, Percival bought the peak himself.

For many years after leaving office, he negotiated with landowners, buying up parcels around Katahdin with his own, mostly inherited, money. He then gave the land to the state.

Over the next 31 years, Percival went on to give Maine 27 more public parkland parcels and a $7 million trust for upkeep. Today, Baxter State Park encompases 209,644 acres, making it one of the largest state parks in the nation.

In time, Percival’s generosity and vision have taken on mythic proportions.

In 1971 the Legislature adopted a statement of purpose for Baxter’s park. It began: “Seldom has a more generous gift been presented to a people than has been given by Percival Proctor Baxter to the people of the State of Maine. It is incumbent upon them, the recipients, to

preserve the trust impressed upon them.”

In February, Gov. Janet Mills proclaimed March 3, 2021, as Baxter State Park Day. Her statement said Percival acquired the land “at his personal expense” and it “still stands as a symbol of the solitude, steadfastness, and independence that is the spirit of the State of Maine.”

Neither Mills nor the Legislature mentioned where the wealthy philanthropist’s family money originated: Canned food and piecework labor.