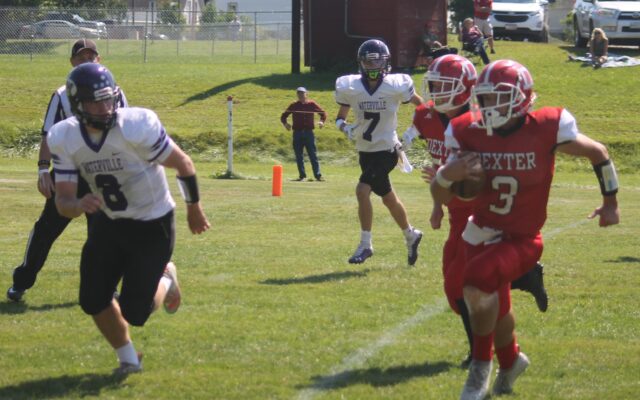 Stuart Hedstrom • September 6, 2021
DEXTER — Following the cancellation of Maine high school tackle football at all divisions in 2020, the Dexter Regional High School football team had to wait another year for its inaugural game as an 8-man program. Waterville High School also had the same wait after switching from 11 players following the conclusion of the 2019 season.

DEXTER — Following the cancellation of Maine high school tackle football at all divisions in 2020, the Dexter Regional High School football team had to wait another year for its inaugural game as an 8-man program. Waterville High School also had the same wait after switching from 11 players following the conclusion of the 2019 season.

The Purple Panthers, who are playing in the 8-man large school class, ended up having the better start as the team earned a 60-24 week one victory over small school division member Dexter on the afternoon of Sept. 4.

On the first play from scrimmage, Waterville sophomore Dawson Harrison took the handoff on a counter 64 yards for the touchdown and the 2-point conversion put the team ahead 8-0.

Dexter responded by moving the football 64 yards in seven plays to the opposition’s 13-yard line. On first down senior quarterback Avery Gagnon kept the football on an option to the left, and he snuck inside the pylon for the first Tiger touchdown of 2021. The 2-point pass fell incomplete as Waterville led 8-6.

Both teams added another touchdown each in the opening quarter, Dexter’s came on a 3-yard rush by junior Kayden Kimball to make the score 16-12. Kimball led the Tigers with 66 yards on the ground, coming on eight carries.

Early in the second quarter Dexter again followed a Waterville score with a trip to the end zone of the team’s own.

Gagnon brought the kickoff to the Waterville-37 and senior Cam Allen then gained seven yards. At the 30-yard line, junior Bryce Connor bounced off left tackle and he ran down the left sideline for the touchdown.

The ensuing 2-point attempt on the ground came up short to keep the score 22-18. Dexter would end up 0-for-4 on conversion tries, whereas Waterville was 6-of-8.

Purple Panther quarterback Liam Von Oesen had a big game, rushing for 249 yards in 13 carries for three touchdowns while also going 4-of-6 in his pass attempts for 135 yards and two of his team’s other eight touchdowns to junior tight end Tyson Smith. Both of these scores on the ground came in the second quarter. Von Oesen rushed for 26- and 44-yard touchdowns, and followed both these with additional trips across the goal line for two each time as his team led 38-18 at the half.

Dexter’s third touchdown came late in the third quarter. From the Waterville-1, junior Will Kusnierz dove across the goal line and in to make the game a 46-24 contest at that point.

Dexter will have a bye this coming weekend after Washington Academy of East Machias canceled its season. The next game is scheduled for 1 p.m. on Saturday, Sept. 25 vs. Houlton High School (1-0). The Aroostook County team, which is a cooperative program with Hodgdon High School, Southern Aroostook Community School of Dyer Brook and Greater Houlton Christian Academy, joined the Tigers in making the switch to 8-man football.