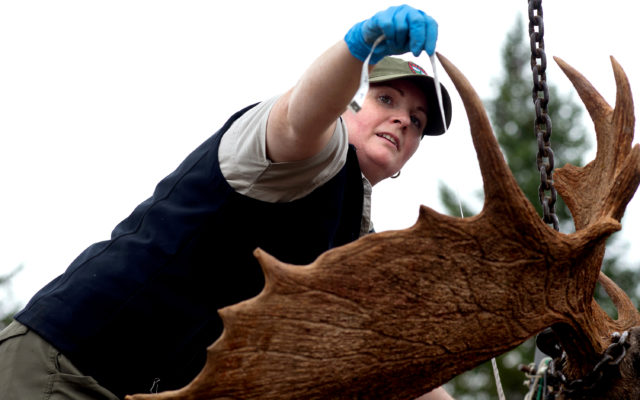 The history of Maine’s moose hunt

Contributed • September 6, 2021
By Pete Warner, Bangor Daily News Staff Later this month, there will be an unmistakable influx of pickup trucks and hunters in Maine, especially in the northern region. That’s because the 2021 moose hunt is close at hand.

Later this month, there will be an unmistakable influx of pickup trucks and hunters in Maine, especially in the northern region.

That’s because the 2021 moose hunt is close at hand. The first week of the season begins on Monday, Sept. 16, in several zones, and will continue in different locations through Nov. 27.

Maine began sponsoring a moose hunt in 1980 and it has turned into a tradition for those in search of quality meat and maybe an impressive set of trophy antlers.

Early 1900s: The state’s moose population drops to just a few thousand, statewide, after years of unrestricted hunting, including market hunting, by which animals would be shot and then sold for meat, and the continued clearing of forests for farmland.

1980: Changes in forest practices, including clear-cutting, have provided moose with more habitat and food sources, and the herd shows signs of consistent growth. That prompts Maine to stage its first modern moose hunt, with 700 permits available. The moose weren’t hard to find — 91 percent of hunters filled their tags. Those hunters were not limited to a specific Wildlife Management District. Instead, they were allowed to hunt anywhere north of the Canadian Pacific Railroad tracks during the last week of September. A total of 37,636 people — all Maine residents — applied for those permits. The hunt is considered a one-year, “experimental” hunt.

1981: No moose hunt is held, but the state considers what it learned through the experimental hunt and concludes that moose hunting should resume the following year.

1982: After a one-year hiatus, the moose hunt returns, with 60,150 applicants signing up for a shot at one of 1,000 permits. The New York Times reports that applicants from as far away as California and Saudi Arabia sign up for a chance at a permit.

1983: A group calling itself SMOOSA — Save Maine’s Only Official State Animal — leads a referendum drive aimed at ending the state’s moose hunt. That effort fails, with 60.5 percent voting against the measure and 39.5 percent voting for it.

1991: An all-time success rate record is established, with 96 percent of the 1,000 permit holders filling their tags.

1994-2001: The state increases the number of moose permits offered as the state’s moose population continues to rise. In 1994, 1,200 permits were allotted in a year that 94,532 hunters applied — a record number of applicants that still stands. By 1999, the number of permits allotted rose to 3,000, where it stayed for three years.

2009: A record 3,015 permits are allotted. A steady decline of applicants for those permits had occurred since 1994, and in 2009, just 56,654 people entered the permit lottery. Some who stopped entering the lottery said they had given up on ever being drawn as they have seen others win permits more than once.

2011: In order to make the lottery more fair to those who haven’t been drawn, the state makes hunters who are drawn for a permit sit out for three years before they can win another permit. Until now, hunters were only required to sit out for two years. Other rules were designed to reward long-time entrants who have never been drawn by giving them more bonus chances in the lottery and setting a threshold for an applicant to automatically receive a permit.

2014: Citing new access to data that shows the state’s moose calves had struggled to survive through the winter, the state decreases the number of available permits by 25 percent, to 3,095.

2019: Maine unveils its big game harvest dashboard, which provides daily big game tagging records to anyone with access to the internet.

2021: Maine allots 3,480 moose permits for the upcoming season, an increase of 11 percent over the previous year.