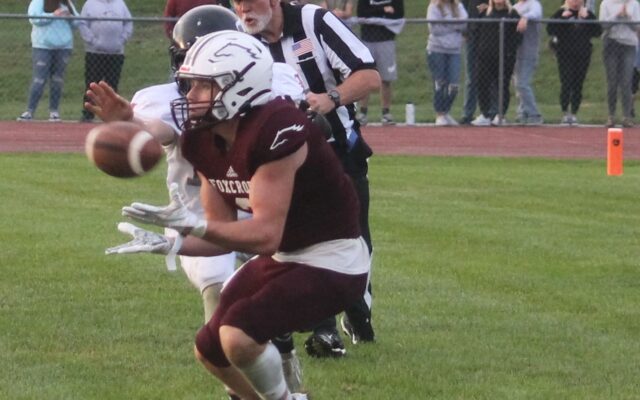 Stuart Hedstrom • September 5, 2021
DOVER-FOXCROFT — Senior quarterback Austin Seavey threw three touchdown passes and ran for another. Junior Caden Crocker was on the receiving end of two of the touchdowns and he brought a kickoff back for another score as Foxcroft Academy defeated Lisbon High School 33-16 in a mutual season opener on Sept.

DOVER-FOXCROFT — Senior quarterback Austin Seavey threw three touchdown passes and ran for another. Junior Caden Crocker was on the receiving end of two of the touchdowns and he brought a kickoff back for another score as Foxcroft Academy defeated Lisbon High School 33-16 in a mutual season opener on Sept. 3.

Earlier in the fourth quarter the visiting Greyhounds, who won the last Class D title handed out in late November 2019, scored on a 4-yard rush by junior Colby Levasseur. Sophomore Jimmy Fitzsimmons rushed for the 2-point conversion to put his team within 10 at 26-16 with nearly 11 minutes left in regulation.

From there Foxcroft would get its three possession lead back. A drive starting at the Pony 18-yard line went 11 yards to the Lisbon 1 for a fourth-and-goal. Foxcroft also kept the clock running, including letting the play clock run down to a second before calling a timeout with 5:38 remaining prior to the fourth-and-goal.

Once the teams returned to the line of scrimmage, Seavey took the shotgun snap and ran up the middle. He crossed the goal line to put his team ahead by 16, 17 with sophomore Kemsley Marsters’ PAT at 33-16.

The touchdown on the ground followed three through the air for Seavey. He would rush for 99 yards on 11 carries while being 10-of-14 in his pass attempts and throwing for 200 yards.

Lisbon would fumble on its opening drive and senior Gideon Topolski recovered at the Pony-45. Four plays later Seavey hit sophomore Jackson Smith in stride for a 30-yard touchdown. Smith later had a 76-yard reception to finish the night with 106 receiving yards.

The Greyhounds did go up 8-7 early in the second. Crocker fielded the ensuing kickoff at the 19-yard line as he leapt to grab the football and prevent it from going behind him. Crocker weaved his way through the coverage and ran down the right sideline for the 81-yard touchdown.

Before the end of the quarter Seavey and Crocker connected on an 18-yard touchdown and they had a 15-yard touchdown play in the third quarter (set up in large part by Smith’s 76-yard catch) for a 26-8 lead with the PAT.

Crocker finished the game with six receptions for 84 yards and two touchdowns. He gained 71 yards on the ground in six attempts and had 83 kickoff return yards — most of these coming on the 81-yard touchdown — for 238 all-purpose yards.

Foxcroft is scheduled to travel to Wales to face Oak Hill High School at 1 p.m. on Saturday, Sept. 11, the Raiders played in Class D South in 2019. The two programs have no recent history of head to head matchups, just the occasional mutual opponent in some seasons, but did meet in the 1982 Class D championship (a 28-6 Raider win).

The game vs. the Ponies will be the first of the season for Oak Hill. The team’s Sept. 4 contest vs. John Bapst Memorial High School of Bangor was canceled due to a positive COVID-19 case and subsequent need for others to quarantine within the John Bapst program.