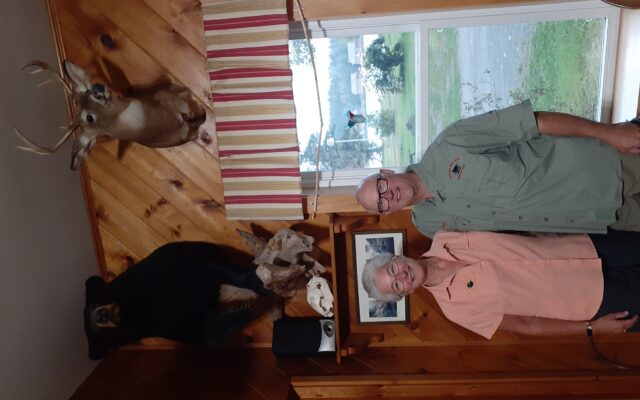 Contributed • September 4, 2021
By Pete Warner, Bangor Daily News Staff KOKADJO — Northern Pride Lodge was bustling with activity on a Monday night. Mike Virgilio of Hanover, Pennsylvania, became the first hunter among 11 in camp to harvest a black bear on opening day and everyone had returned from the woods.

KOKADJO — Northern Pride Lodge was bustling with activity on a Monday night.

Mike Virgilio of Hanover, Pennsylvania, became the first hunter among 11 in camp to harvest a black bear on opening day and everyone had returned from the woods.

With the grounds shrouded mostly in darkness, lodge co-owner Barbara Plummer could be seen through the kitchen window preparing to serve a late meal, including cream of broccoli soup and biscuits.

Outside, illuminated by a light at the game pole, the hunters gathered for a look at Virgilio’s bear. It would be the first of several successful hunts during the week.

Registered Maine Guide and Northern Pride Lodge co-owner Wayne Plummer hoisted the bear into the air on the scale. In the field he estimated 130 pounds, while Barbara guessed 107 when seeing the animal in the back of the truck.

It weighed 127 pounds, eliciting shouts of joy from Barbara and some of the hunters.

Wayne used a hose to wash off the animal in preparation for placing it in the adjacent cooler shed where it would be stored before being processed.

There was still much to be done, including serving the meal and cleaning up, before the hunters settled in for the night.

For the Plummers, there was little time to rest.

Wayne and fellow guide Ron Rancourt would be out the door by 6 a.m. and hit the road to check and re-bait the 39 active hunting sites where treestands had been placed.

Barbara would rise early to get breakfast and coffee going for the clients.

Earlier Monday, the crew shared stories and laughs over lunch, then paraded into the kitchen, depositing their trash and dishes in the appropriate places.

Barbara served dessert to those who wanted it, talking in the meantime about the ins and outs of guiding bear hunters and operating the lodge.

Wayne emptied the trash can and took it outside, then made his way upstairs to get dressed for the afternoon hunt. He returned and gathered bottled water to take along.

Northern Pride Lodge appears to be a well-oiled machine, having developed a level of proficiency during the more than 21 years the Plummers have owned it.

More than that, the enterprise is a labor of love.

A huge part of the lodge’s success, and the knowledgeable guide service and friendly atmosphere it provides, stems from the close relationship between Wayne and Barbara.

In fielding questions about the challenges of guiding hunters and providing meals and lodging, each occasionally jumped in and answered on the other’s behalf.

Their comfort level comes from experience and trust gained over time.

Barbara and Wayne started dating as students at Lisbon High School. She was a senior and he was a junior.

They’ve been together ever since and have been married 36 years.

Wayne grew up in a hunting and fishing family, but Barbara had little in the way of outdoors experience.

That changed dramatically when Barbara worked in the Outdoor Discovery Program at L.L. Bean in Freeport. While there, the company offered employees and their spouses the opportunity to take a course to become a Registered Maine Guide in the recreational category.

Wayne, who at the time worked at Bath Iron Works, also studied for his hunting certification at the same time. He later went back and did another for fishing.

Shortly thereafter, they started camping at Northern Pride Lodge. After four or five years, it came up for sale, so the Plummers sold their house in Durham and became lodge owners.

“[BIW] was a job. This doesn’t seem like a job to me,” Wayne said. “I feel like I’ve lived my retirement already.”

Barbara quickly learned to appreciate the thrill and considerable rewards of hunting and fishing. Not the least of those was her affinity for eating the game that was harvested.

“The beauty that I like is, I’m a meat hunter,” she said.

She pointed out the unfortunate reputation bear meat has among some folks who may not know how to preserve or prepare it properly.

“People have said, ‘I’ve had bear meat and it’s awful.’ I’m like, did you drive around with it in your truck for a year?” Barbara joked.

She enjoys hunting bears, but even has fun simply photographing them at the bait sites. Barbara also is fond of deer hunting to procure venison and the couple has made regular out-of-state trips to hunt the likes of Sitka deer in Maryland, among other adventures.

In October, Barbara will be toting a rifle in Aroostook County, where she has a cow permit for the moose hunt in Wildlife Management District 2.

While trying to fit in some fun, she said it’s challenging to plan meals for the many clients who will visit the lodge during the year for fishing or hunting bears, moose, ruffed grouse, deer and even coyotes.

“All of July and August I am cooking and baking and putting things in the freezer so that I actually have enough food and time to feed everybody for the hunt season,” Barbara said.

While Wayne’s fall focus is on guiding bear, moose, grouse and some deer hunts, he also is busy during the late spring and summer months. He spends many hours on the road and on the water, guiding anglers on drift boat trips on the West Branch of the Penobscot River, the East Outlet of the Kennebec at Moosehead Lake and in the Kennebec between Waterville and Sidney.

When he’s away, Barbara holds down the lodge, which includes five guest bedrooms. The property also features 24 campsites on First Roach Pond, including 19 seasonal spots that are rented for the entire summer.

The Plummers take their jobs as guides and outfitters seriously. They make sure their sports follow guidelines in regard to sportsmanlike hunting practices, firearms and tree stand safety, and Maine hunting and fishing laws.

And while they take great pride in providing memorable outdoor experiences, they realize it can’t last forever.

Northern Pride Lodge is up for sale. There’s no urgency, Wayne said, as the Plummers test the favorable real estate market. There haven’t been any offers, which is just fine with the couple.

“I figure maybe we’ll do it five more years and then I’ll keep my fishing [guiding],” Wayne said of his tentative exit plan.

In the meantime, Barbara and Wayne Plummer will be hosting hunters and anglers from Maine and across the country while continuing to live their outdoors love story.