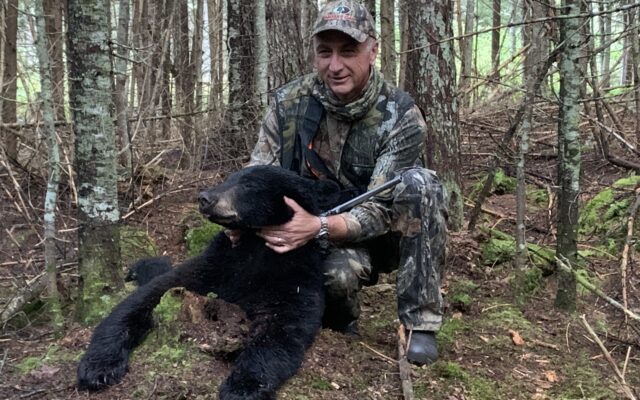 Contributed • September 2, 2021
By Pete Warner, Bangor Daily News Staff KOKADJO — Bear hunters are a pretty patient bunch. They have to be.

KOKADJO — Bear hunters are a pretty patient bunch. They have to be.

Even spending long hours at baited sites off old logging roads near this Piscataquis County outdoors haven, a hunter might not even see a bear.

Registered Maine Guide Wayne Plummer and the folks at Northern Pride Lodge work to help their sports beat the odds.

Since July, Plummer, his wife Barbara and fellow guide Ron Rancourt have been preparing to take hunters afield to harvest a bear.

It’s the first of three waves of hunters who will spend time in one of the 39 treestands that have been strategically placed within 10 miles or so of the lodge located on First Roach Pond.

Bear bait, which includes doughnuts, pastries and trail mix — yes, the kind with M&Ms, raisins and cashews — has been placed in blue, 55-gallon plastic barrels at those sites for the last month.

Wayne Plummer said each of the sites where hunters will be sitting is rebaited every morning as needed, while the other 28 get replenished every three days.

“You’ve got to have pretty bad luck not to see a bear in six days,” Wayne said, admitting sightings are not a sure thing.

At noontime on Aug. 31, laughter emanated from the dining room in the lodge as the hunters finished their lunch before heading afield. There was a sense of calm amid the anticipation.

“You’re always hopeful but it’s a long trip, you invest a lot of time and money and effort, and you wish you’ll get a sizeable trophy,” said Mike Virgilio of Hanover, Pennsylvania, a first-time visitor to Maine.

“But you might be here all week and get nothing,” he said.

Each afternoon, Wayne Plummer and Rancourt lead a handful of vehicles to the hunting locations. On Monday, two trucks headed out with Wayne’s group of five hunters for the short drive to the stand locations.

The first hunter delivered to his stand was 78-year-old Ed Glidden of Lynn, Massachusetts. Glidden harvested a small bear here last year and is back after having survived COVID-19 last year.

When Wayne reemerged, the rest of the group followed him up the road to the junction of another road, where the other hunters waited as Wayne transported Virgilio to a stand a mile or so away.

Tony Sieminski, his grandson Cory Sieminski and friend Brad James, all of Tarentum, Pennsylvania, waited to be deployed. The group has considerable previous experience hunting out of Northern Pride Lodge as each has been here at least twice.

The men were complimentary of the hospitality and expertise provided by the lodge and appreciate the opportunity to be back in the Maine woods with the chance to hunt bears.

“I’ve had great experiences in Maine,” said James, the only hunter in the group using a bow and arrow.

Above all, the longtime firefighter and lifelong hunter relishes the time off. He harvested a 318-pound bear here in 2019.

“Lately, I’ve been working 64-hour weeks, so I just want to get in the woods and be quiet: no phone, no pagers, no making decisions, no being responsible for anyone or anything,” James said.

Wayne soon returned again and took Cory Sieminski to his stand down an adjacent road, then shuttled James and Tony Sieminski to their respective locations.

“This is the worst part, waiting to get in there,” Tony Sieminski said of climbing into the stand.

As we waited for any news, Wayne talked about managing bear baiting sites and recounted his career as a hunting and drift boat fishing guide. He mentioned that the bait at the site where Virgilio was hunting had been “hit” by a bear or bears that morning.

Northern Pride Lodge does considerable education with its guests regardless of their experience. After Sunday dinner, Wayne reviews methods for determining the size of bears, using the plastic barrels as a measuring stick of sorts, to help prevent harvesting cubs or undersized animals.

He also discusses shot placement and shooting angles to ensure efficient kills and eliminate poor shots that could wound a bear.

“If someone shoots and we find blood, but we don’t recover the bear, they’re done [hunting],” Wayne said.

NPL also requires hunters to wear a safety harness while in the stand.

As the afternoon progressed, the sun began to dip behind the treeline and the breeze slacked, the woods almost became silent.

The hunters weren’t separated by more than a few miles from the rendezvous point, where Wayne was positioned to assist quickly if needed. Each hunter is equipped with a handheld radio.

At 6:18 p.m., more than five hours after we left the lodge, a shot echoed across the landscape. Three minutes later, a distinctive voice came over the radio.

Virgilio, a native of Italy, reported that he had shot a bear.

We made the short drive to the location where Wayne pulled out a plastic Jet Sled to extract the bear. It was a walk of perhaps 150 yards to the site, where Virgilio had climbed down and was waiting.

“It was great, exciting,” said Virgilio, who observed the bear for only a short time before taking the shot.

He was unable to see where the bear went after the shot.

“I knew it was getting darker and something was going to come out,” he said.

The bait barrel was situated some 35 yards from the stand along the edge of a stream. It was in thick cover provided in part by a stand of pines on a knob next to the stream.

Wayne quickly found blood and walked only about 20 feet before he saw the bear on the hill.

“That’s the way I like to find them, within sight of the barrel,” Wayne said.

After snapping some photos to preserve the moment, we took turns hauling the bear back to the truck. We drove up the road a short distance where Wayne expertly field-dressed the animal.

The bear, which Wayne predicted was 130 pounds, later weighed in at 127. He described it as a typical size black bear taken during the hunt.

Once legal shooting time had passed, the remaining hunters were picked up and we returned to the lodge.

Virgilio was greeted by congratulations from Barbara Plummer and his fellow hunters. He could now add a black bear to a list of harvested game that includes deer, bison, ram, bobcat and cougar.

“It’s nice to go home with some meat and a nice trophy,” Virgilio said.

The rest of the group would have to wait patiently for the right opportunity and, as of Thursday morning, six had shot a bear.

“You don’t have to harvest anything,” James said. “It’s just good to be back in nature.”