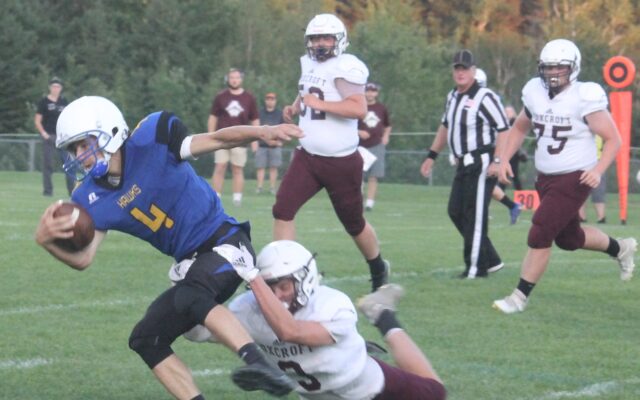 HERMON — Foxcroft Academy had possession of the football 10 times during an exhibition game at Class C Hermon High School on Aug. 27. The Ponies would score touchdowns on seven of these drives. The team needed to punt just once and aside from an interception late in the first half, the only other possession not finishing across the goal line came to an end as a result of time expiring to conclude the fourth quarter.

The Foxcroft punt team made its only appearance following the first drive of the game, but the Pony defense forced the host Hawks to punt the ball back. Being the preseason both teams opted beforehand to call for fair catches on all punt and kickoff returns. The Maine high school tackle football season was canceled in 2020 in favor of flag football only and after taking part in controlled scrimmages earlier in the week, both squads were still acclimating to facing opposing players in full pads after a more than 21-month break.

From the team’s own 19-yard line the Foxcroft offense used eight plays to move down to the Hermon 3-yard line for a third and goal.

Senior quarterback Austin Seavey took the shotgun snap and he dove through a hole in the left side of the line for the first touchdown of the evening. Sophomore Kemsley Marsters booted the PAT through the uprights with ample distance to spare to start his perfect 7-of-7 kicking performance.

Foxcroft would soon after take advantage of a Hermon miscue with an option pitch inadvertently being tossed back to no one on a miscommunication and Pony sophomore Gage Beaudry pouncing on the loose football at the Hawk-17 in the closing seconds of the first quarter.

Three plays later junior Caden Crocker scored from a yard out. Crocker later had a 31-yard touchdown run, part of 52 rushing yards on six carries. He also made three receptions for 91 yards for 143 yards of total offense.

Following a Hermon touchdown near the midway point of the second quarter, the Ponies needed just one play to go ahead by multiple possessions once again. With the football placed at the Pony-30 following the kickoff fair catch, senior Jesse Drury took the handoff and ran left. He cut back in and sprinted down the right sideline 70 yards for the score and 21-6 lead with Marsters’ ensuing kick. The play helped Drury finish with a game-high 81 yards on the ground, coming on just five attempts.

A three-and-out gave Foxcroft the football back at the team’s own 33. An eight-play drive culminated in sophomore Gage Beaudry stretching across the goal line for a 1-yard touchdown on first-and-goal despite Hermon’s attempts to wrap him up and force another offensive play.

The fifth and sixth Pony touchdowns came in quarter No. 3. Seavey found senior Gideon Topolski open in the endzone for a 25-yard scoring play. The quarterback finished 11-of-15 for 192 yards with the touchdown and one interception. Topolski caught a game-high five passes, resulting in 54 yards. The sixth touchdown was Crocker’s second of the game on the ground.

In the fourth quarter reserves came onto the field to get some playing time in preparation for the regular season. Sophomore Wyatt Rayfield would score on a 3-yard keeper up the middle for the seventh and final Pony touchdown.

Foxcroft is scheduled to kick off the regular season by hosting Lisbon High School at 6 p.m. on Friday, Sept 3. This year kickoff has been moved up an hour to accommodate the greater distance needed to travel to and from Oakes Field for many of the 2021 games.

The meeting will be the first between the two programs since the 2006 Class C championship, which was the second straight year Foxcroft and Lisbon faced off for that season’s gold ball. Under realignment, for this season there are no longer two regions in Class D so teams that formerly were in the North and South will now all face one another in the regular season.

Foxcroft and Bucksport High School are the only teams from the 2019 Class D North division/Little Ten Conference that did not make the switch to 8-man football. This season the two will be joined by former Class D South programs Lisbon, Oak Hill of Wales, Madison and Winthrop along with several others making the switch down from Class C, Freeport, Poland and John Bapst of Bangor.