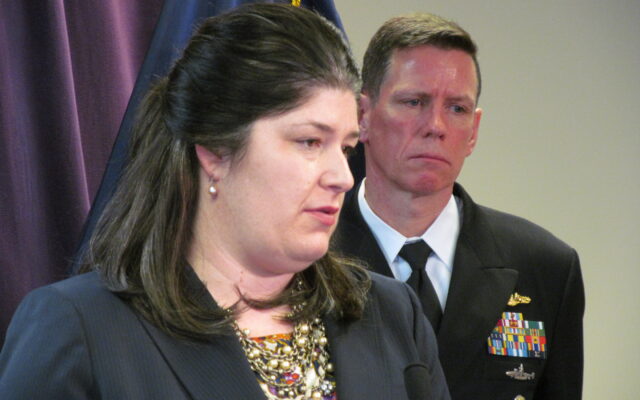 Darcie McElwee has been a federal prosecutor since 2002.

She will replace Halsey Frank, 62, of Portland who resigned in February after working in the office for more than two decades.

McElwee, 48, of Scarborough graduated from Bowdoin College in 1995 and from the University of Maine School of Law in 1998. From 1998 until 2002, she worked as an assistant district attorney in Penobscot and Piscataquis counties.

R. Christopher Almy, the former district attorney who hired her in 1998, said Tuesday that “Maine will be fortunate to have her as U.S. attorney.”

“She’s a crackerjack and a ball of fire,” he said. “She always does the right thing. She’s all about being fair and being tough.”

“For nearly two decades, Darcie has provided exceptional service to the U.S. Attorney’s Office in Maine, helped to keep our state safe, and protected victims of crimes,” U.S. Sen. Susan Collins said in a statement. “I look forward to working with my colleagues to advance Darcie’s nomination so that she can continue her distinguished service to our state and our country.”

McElwee, a Caribou native, said: “I am honored to be nominated and I look forward to the confirmation process.”

The nominee’s parents, John and Carol McElwee, both were elected to office as Republicans, according to the Bangor Daily News archives. Her father was a county commissioner and district attorney in Aroostook County before being appointed a District Court judge in 2000. He retired in 2009. Her mother served in the Maine House of Representatives.

“A true daughter of Maine and the County, Darcie McElwee is a career professional dedicated to justice for all Maine people,” he said. “She will be the voice of the United States of America in our courtroom and an excellent choice. She is a friend of Maine law enforcement.”

Since joining the U.S. attorney’s office, McElwee has prosecuted several high profile sex trafficking cases including most recently a New Hampshire couple, Shou Chao Li and his wife, Derong Miao, both 39 of Concord.

The couple admitted that in 2016 they set up a prostitution ring using rented houses and motels in Maine, New Hampshire and Vermont. Many of the women Derong recruited to work as prostitutes came to the United States on B-2 non-immigrant visas that allow foreigners entry for pleasure, tourism or medical treatment but not to take legitimate jobs, according to court documents.

While working as a federal prosecutor, McElwee has served as the Project Safe Neighborhoods coordinator for the office. She also has taught advanced trial advocacy at Maine Law.

McElwee’s nomination must be confirmed by the U.S. Senate.

Collins, a Republican, said she would support McElwee’s nomination.

“For nearly two decades, Darcie has provided exceptional service to the U.S. Attorney’s office in Maine, helped to keep our state safe and protected victims of crimes,” she said.  She is an experienced law enforcement professional, and her nomination builds on the tradition of capable career prosecutors filling this important position in Maine.”