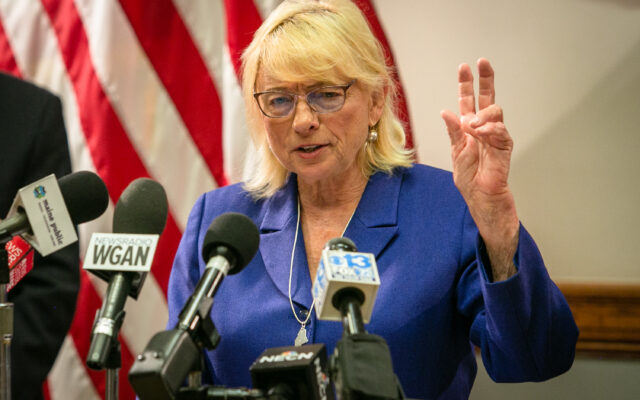 Contributed • July 28, 2021
By Caitlin Andrews, Bangor Daily News Staff Gov. Janet Mills on Wednesday urged Mainers in places with higher COVID-19 transmission rates to wear masks in indoor public spaces and in all schools regardless of vaccination status, a recommendation that could be fraught as counties here quickly left and joined the list.

Gov. Janet Mills on Wednesday urged Mainers in places with higher COVID-19 transmission rates to wear masks in indoor public spaces and in all schools regardless of vaccination status, a recommendation that could be fraught as counties here quickly left and joined the list.

The news came a day after the U.S. Centers for Disease Control and Prevention recommended masks in all counties with “substantial” or “high” community transmission, a group that included York and Piscataquis counties in data released Tuesday but only included Waldo County on Wednesday. The U.S. CDC recommended masks for those living with immunocompromised people and for all people in public schools, regardless of vaccination status.

The policy change is a reversal from two months ago when Mills said vaccinated residents are safe to not wear masks as she relaxed social distancing guidelines. It was also when the state decided to retire its prevention checklists and shifted from creating its own policies to adopting U.S. CDC’s policies, which the state largely followed anyway.

The rapidly shifting nature of the virus and case counts could complicate recommendations. On Tuesday, the U.S. CDC community transmission tracker showed York and Piscataquis counties at more than 50 new cases per 100,000 people in the last week. State officials named those two counties as the only ones affected by the recommendations on Wednesday.

But both counties had lost that designation after an update later in the afternoon with those two counties dropping below the threshold and Waldo County going above it. The federal CDC updates its tracker daily, which could cause confusion as public officials try to keep up.

Public health officials tried to strike a balance between conveying the risk of being unvaccinated and unmasked in the state against the specific situation of the virus in the two counties. Maine CDC Director Nirav Shah said the county-based approach takes into account differing vaccination rates and that taking a statewide approach could sow doubt in vaccines.

But he also acknowledged that the more contagious delta variant that has become the dominant strain in the country and has been tied to rare but increasing “breakthrough” cases in vaccinated people is likely undercounted in Maine because the state only tests a subset of positive results for the variant.

A month ago, Mills ended Maine’s state of emergency, a step that prevented her from requiring the masks by decree. Currently, masks are not required anywhere in the state except for public transportation or ride shares, within indoor transportation hubs and health care settings.

In May, Mills welcomed the U.S. CDC’s policy shift, urging people to get vaccinated as the state got “back to normal.” She struck a similar tone on Wednesday, highlighting the state’s high vaccination rates while emphasizing the risks the delta variant poses to the state’s progress.

“We continue to strongly urge all people to protect themselves, their loved ones, and their communities by getting your shot,” Mills said in a statement. “In the meantime, we recommend that Maine people follow the U.S. CDC’s updated public health recommendations.”

The focus on the two counties demonstrates a return to the regional approach Mills used to determine whether schools could have in-person learning safely and how certain businesses could operate during the pandemic. Infection rates around the state are gradually rising after falling significantly since early April, though Maine has had among the lowest case rates among states and the highest vaccination rates during the pandemic.

The recommendations will also place more pressure on school districts to institute policies of their own. Currently, only the Pfizer vaccine is available to people 12 and older, although Moderna is expected to be granted that status soon. Both companies are conducting trials to see if the vaccines are safe for children aged 5 to 11, but requests to seek emergency approval are not expected to come until after school restarts in the fall.

Eileen King, the deputy executive director of the Maine School Management Association, said school boards and superintendents across the state have begun discussing whether students should be required to wear masks depending on their age. The majority were waiting to see what federal guidance would roll out before making those decisions, she said.