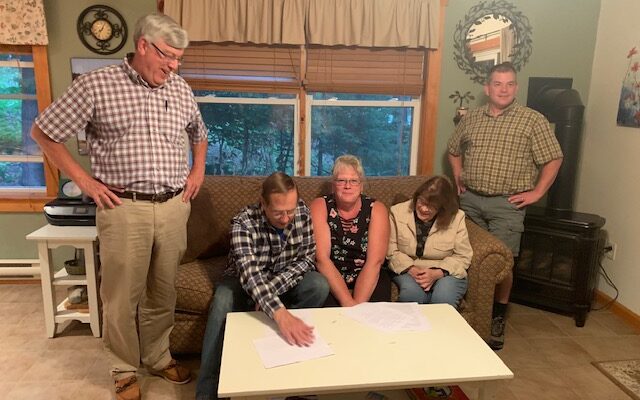 DOVER-FOXCROFT — On July 14 RSU 68 Superintendent Stacy Shorey, Foxcroft Academy Head of School Arnold Shorey and the six FA-RSU 68 Liaison Committee members reached an agreement to sign a 10-year extension to the existing contract between Foxcroft Academy and the regional school unit. The current contract still has three years remaining so with this new deal, RSU 68 students will continue to call Foxcroft Academy home through June 30, 2034.

Like the previous one, this contract stipulates that RSU 68 agrees to send all students who are in grades 9-12 and are legal residents of Sebec, Dover-Foxcroft, Monson and Charleston to Foxcroft Academy. In return, FA agrees to accept all students that fulfill those criteria.

“The Foxcroft Academy Board of Trustees and the RSU 68 Board of Directors have worked to build a solid relationship for as long as I have had the opportunity to be involved with these groups,” said FA Board President Dr. Richard Swett. “We both have a lot of common goals and aspirations for our students, and signing a new, long-term contract reaffirms our commitment to our communities and the young people we serve daily.”

Foxcroft Academy will be celebrating its bicentennial in 2023, and for the better part of those 200 years, it has been the high school for the area’s youth. This new agreement will keep that in place for over the next decade.

“While we still had three years to come to a new agreement, there was no need to wait, especially when both entities have such a strong relationship,” said Jenny Chase, RSU 68 board chairperson. “The communication and trust between these groups have grown stronger since we signed the last deal, and in these times of uncertainty in the world, the stability that a long-term contract brings us gives the boards great hope for our future together.”