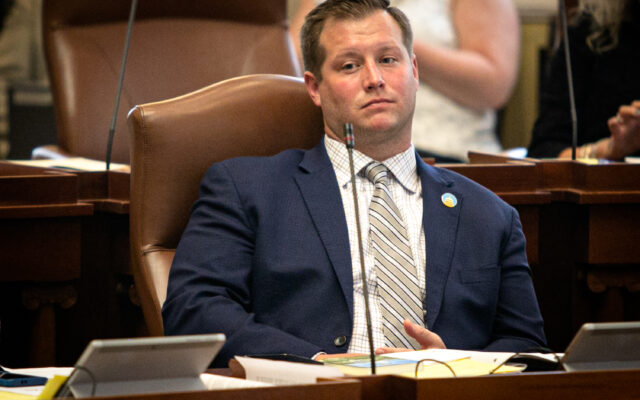 Contributed • July 16, 2021
By Michael Shepherd, Bangor Daily News Staff This story will be updated. AUGUSTA, Maine — A young state lawmaker from Aroostook County will run against U.

The entry of Sen. Trey Stewart, a 27-year-old from Presque Isle who is serving his first term in the upper chamber, kickstarts the campaign against Golden, a Democrat and Marine veteran who narrowly ousted Republican incumbent Bruce Poliquin to win the seat in 2018. Stewart said he will file to run on Friday afternoon and launch his campaign at the Maine Potato Blossom Festival in Fort Fairfield on Saturday.

The 2nd District has been a battleground for the two political parties since 2014 and it will continue to be one. No House Democrat holds a district that voted for President Donald Trump by a bigger margin in 2020 than Golden, who has so far frustrated Republican efforts to tie him to Democratic leaders with key votes against gun control and other party priorities.

Stewart previewed a strategy of focusing less on Golden’s stances than the congressional power dynamic in an interview, criticizing Democrats for overspending. While Golden has refused to back House Speaker Nancy Pelosi, D-California, for her position, Stewart noted that Democrats need to hold swing seats like the 2nd District for her to retain the gavel.

“Who are we putting in power?” he said. “Is it Nancy Pelosi and her cronies down there who it’s been working out well for … to have Jared in Congress, or are we going to do something else?”

Stewart, a student at the University of Maine School of Law with a grandfather who was also a legislator and a father who is a judge, beat a Democratic incumbent to win his first House term in 2016. Last year, he ousted then-Sen. Mike Carpenter, D-Houlton, a former Maine attorney general who had been holding a deeply conservative district.

In the Legislature, Stewart has been a reliable conservative but has led several successful bipartisan measures, including one signed by Gov. Janet Mills in 2019 that eased a so-called “benefits cliff” for working families in food stamp and cash assistance programs.

Trump, who won the 2nd District twice, may again loom large over the 2nd District race. Stewart said “wasn’t a fan” of all the former president said “but I think he did a really good job on trade.” Trump aligned with many Maine politicians by attacking free-trade agreements long blamed for hurting rural manufacturers, though Golden opposed his North American trade revamp.

Stewart broke with Republican leaders to say there should be an independent investigation of the Jan. 6 riots in which supporters of Trump stormed the U.S. Capitol motivated by false claims that President Joe Biden stole the 2020 election. But Stewart said he would not have voted to impeach the former president afterward — as Golden did — without an investigation.

Golden provides a stiff challenge as a strong fundraiser who has already raised more than $1 million this cycle and had $784,000 cash on hand at the end of June. Outside Republican groups have already begun to spend in the race, dropping more than $700,000 on TV, radio and digital ads attacking Golden as of last month.

Neither Poliquin nor former state Rep. Dale Crafts, R-Lisbon Falls, have ruled out a run in 2022. The only other Republican officeholder running against Golden so far, Rep. Mike Perkins of Oakland, raised a paltry $8,000 by June’s end after filing with the Federal Election Commission in late May.