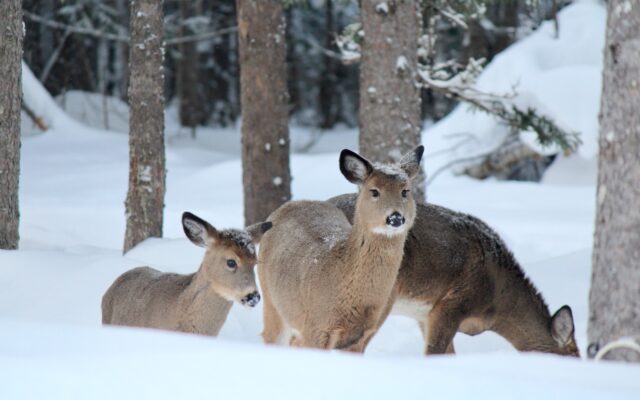 Contributed • July 14, 2021
By Pete Warner, Bangor Daily News Staff White-tailed deer in Maine will have a greater chance of surviving severe winter conditions in the future thanks to recent measures taken by the Legislature. The state budget has earmarked $40 million from the Land for Maine’s future program, which for the next four years will help support efforts to protect deer wintering areas.

White-tailed deer in Maine will have a greater chance of surviving severe winter conditions in the future thanks to recent measures taken by the Legislature.

The state budget has earmarked $40 million from the Land for Maine’s future program, which for the next four years will help support efforts to protect deer wintering areas. And recent legislation will empower the Maine Department of Inland Fisheries and Wildlife’s efforts to purchase and manage that habitat in northern, western and eastern Maine.

A bill sponsored by Rep. Chris Johansen, R-Monticello, was passed earlier this month by the state house and senate and was signed into law on July 8, by Gov. Janet Mills.

The bill, developed through the efforts of the DIF&W, the Sportsman’s Alliance of Maine and other groups, authorizes the DIF&W for the first time to identify and purchase lands specifically as deer wintering areas. The department will also dedicate a biologist to manage the lands.

“We’ve worked for many years collaboratively with private landowners and with the Bureau of Public Lands on deer wintering area management, but have never had the ability to this point to own any of those areas ourselves and manage them with deer habitat as the highest priority,” said Nate Webb, the Wildlife Division Director for the DIF&W.

The agency owns approximately 110,000 acres of wildlife habitat in the state, but those also allow public access for hunting, fishing, trapping and other recreational pursuits.

The new law directs the DIF&W to begin establishing and improving wintering areas that will directly aid in deer survival. So-called deer yards consist primarily of mature cedar, spruce, fir and hemlock trees, which provide a canopy that provides protection from predators, reduces snow depths and allows the animals to more easily browse for food.

“It will also benefit a whole host of species that use similar habitats and there’ll also be benefits in terms of helping meet the state’s carbon sequestration goals,” Webb said.

The DIF&W has already begun the process of mapping out its plan.

“The big challenge is always finding a parcel that meets our goals for the deer but where there’s also a seller that is willing to sell the property,” said Webb, who pointed to the importance of a new position created for a department biologist to oversee the program. “The vast majority of these areas are currently held by large industrial landowners in the unorganized territories.”

The DIF&W also may now use some of the funds from deer tagging fees for land acquisition, in addition to habitat management, Webb said.

Deer wintering areas have been decimated over the last half-century by a combination of factors.

The spruce budworm outbreak from 1970 to 1985, for instance, wiped out 21 percent of all fir trees in the state, according to the Maine Forest Products Council. Other factors include industrial logging by the large companies and private ownership of nearly 93 percent of Maine’s forest land.

Deer in Maine are at the extreme northern end of their range. In some parts of the state, including Aroostook County, they struggle to survive the often bitter cold and deep snow during the winter.

During a winter of average severity, deer in far northern Maine require the shelter provided by a wintering area for 90 to 125 days, according to a 2010 DIF&W report.

The budget allocations and the new law are important steps in helping preserve and restore the deer herd, according to David Trahan, the executive director of the Sportsman’s Alliance of Maine and a former self-employed logger.

“There are regions of the state where sportsmen and women have seen the deer population crash because of the loss of habitat,” said Trahan, a former state representative and state senator.

He said deer wintering areas, which once made up 12 percent of Maine forests, are now down to approximately 3 percent.

The Nature Conservancy and the Maine Coast Heritage Trust, in addition to the sportsman’s alliance, were instrumental in backing funding from the Land for Maine’s Future Program to benefit the deer wintering areas initiative and other conservation and recreation projects, Trahan said.

“I think it’s pretty unique to have these groups come together and we all had our interest in seeing Land for Maine’s Future funded and getting back on track,” he said. “It’s a pretty big deal.”

Webb said the DIF&W wants to be able to establish deer wintering areas in some places where they have existed traditionally, but also hopes to decrease the animals’ reliance on food being provided by residents in some towns.

Feeding operations that include numerous troughs filled with food lure many deer out of the woods, which can lead to increased vehicle collisions, the threat of disease transmission and dietary issues.

“Our belief is that getting back to a situation where we have deer wintering out in traditional areas, away from people, does have benefits,” Webb said. “It wouldn’t do much good to have a good-quality deer wintering area when, a few miles up the road, there’s a significant feeding effort underway.”

Webb also stressed the importance of having an ongoing predator management program to actively control coyotes in wintering areas as needed.

Webb’s excitement about the potential for the success of the deer wintering areas program is tempered by the reality that the habitat can’t be reestablished overnight.

The land acquisition process will take time, especially on the scale being discussed. And it requires approximately 35 years for trees to reach a size and height needed to provide shelter.

“The first step is the most important one. We don’t expect there’s going to be immediate results, but this is a long-term effort and we do believe this bill will really help us get where we think we need to be,” Webb said.