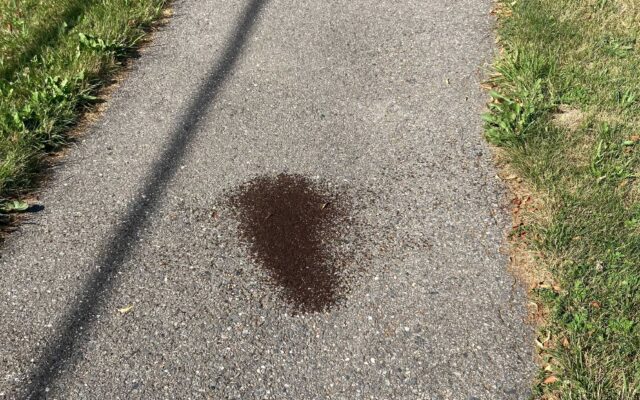 Contributed • July 14, 2021
By Julia Bayly, Bangor Daily News Staff It’s been a good summer so far for ants.  People are seeing swarms of them on sidewalks, in gardens and crawling up the sides of outbuildings.

It’s been a good summer so far for ants.

People are seeing swarms of them on sidewalks, in gardens and crawling up the sides of outbuildings. According to bug experts, it’s what happens when you have a dry summer like the one Maine is experiencing this year.

What people are most likely seeing when they observe a large number of ants on the move, are members of a colony that outgrew its home and are looking for a new place to live, according to Jim Dill, pest management specialist University of Maine Cooperative Extension. That kind of activity is known as “swarming” in the insect world.

This summer’s lack of rain also removed a seasonal threat. Dill said that ants who live underground beneath anthills can have their homes flooded out when it rains.

“In a dry year, as long as there is enough food around, they are going to do very well,” Dill said. “And you see more than normal production of ants.”

At some point, things are going to get so crowded in the colony that the old queen will leave, taking hundreds of thousands of workers with her. Back in the original colony, a new queen will take her place.

“It’s not that unusual,” Dill said. “It’s really what you would expect in a dry year.”

Most ants in Maine are not dangerous and are more of a nuisance than anything else.

While they do bite, Dill said the fire ants found in Maine are not the same as the more aggressive fire ants that live in the southern United states.

Dill also said the dry weather is not good for every species of ant. Carpenter ants, for instance, nest in wet, moist wood.

“Out in the forest there are probably plenty of dead logs for the carpenter ants,” Dill said. “But if conditions are dryer in and around houses there is less chance of a new queen setting up a colony in the house.”

If you do see a swarm of ants on the move, Dill said there is really nothing to worry about. In fact, he said this is a good summer to observe ant swarming, something he’s never actually seen himself.

This weekend’s heavy rain will have little effect on the ant population, Dill said, other than a nest or two getting flooded out.

“I’ve gotten plenty of calls about the ants this year,” he said. “But don’t worry, it’s not ant armageddon.”