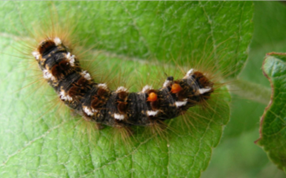 Now is the time to destroy browntail moth eggs

Contributed • July 13, 2021
By Julia Bayly, Bangor Daily News Staff Browntail moths have already begun laying clusters of eggs in fuzzy brown egg sacks that will become next year’s toxic caterpillars. That’s why now is the time to eliminate as many of those egg sacks as possible.

Browntail moths have already begun laying clusters of eggs in fuzzy brown egg sacks that will become next year’s toxic caterpillars. That’s why now is the time to eliminate as many of those egg sacks as possible.

The egg sacks are most often found on the bottom sides of leaves on host trees like oak, apple, crabapple, pear, birch, cherry and other hardwoods, according to Jim Britt, spokesperson with the Maine Department of Agriculture, Conservation and Forestry.

Given the number of browntail moths this season, the result could be staggering. One female browntail moth can lay up to 400 eggs.

The eggs hatch into browntail moth larvae in late August and early September, and winter in nests in trees. In April, larvae will emerge as caterpillars with poisonous, irritating hairs that can cause a blistery rash similar to poison ivy. The hairs also can cause respiratory distress if breathed in.

While the caterpillars have the poisonous hairs that cause irritation and rashes, there is a danger of exposure to the hairs at virtually every stage of the moth’s life cycle. That’s because the toxicity of the hairs is long lasting.

Shed caterpillar skin, abandoned browntail moth nests, cocoons and even the adult moths themselves can have errant hairs stuck to them. Those hairs can also end up on the egg sacks, according to Britt. So he advises taking precautions when removing them from leaves or other surfaces.

“Browntail moth eggs may be removed with gloved hands, by clipping affected leaves and soaking the eggs in soapy water for two days,” Britt said. “Then throw them away.”

While the moth will lay her eggs on building walls, fences or other man made surfaces, Britt said those eggs are not much of a concern. The larvae that hatch out of those won’t survive if they don’t have immediate access to the leaves on which they feed.

According to Jim Dill, pest management specialist with the University of Maine Cooperative Extension, there is little danger of toxic hair exposure from the larvae that will hatch out In August and September.

“The hairs don’t cause much problem until about the third instar in the spring,” Dill said.

Instar is the term for any development stage in insects.In April, experts predicted this summer would be the worst for browntail moth caterpillar infestations since the invasive insect arrived in the state 100 years ago. While browntail moths have been an issue along the coast for years, Dill said this is the first summer they have been so numerous inland.