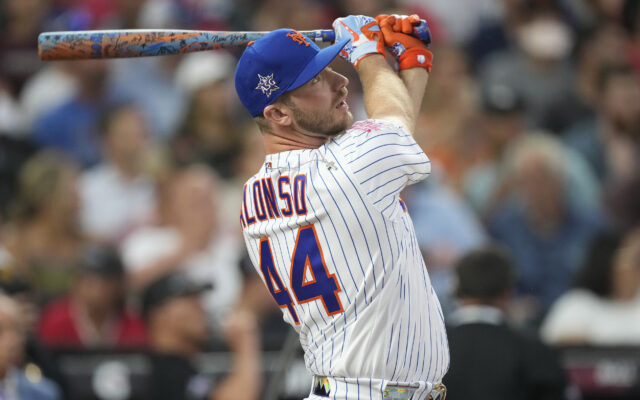 Contributed • July 13, 2021
By Ernie Clark, Bangor Daily News Staff There’s nothing like Maine-grown hardwood to rule the Home Run Derby. Of course, it helps that New York Mets first baseman Pete Alonso has it in his hands.

There’s nothing like Maine-grown hardwood to rule the Home Run Derby.

Of course, it helps that New York Mets first baseman Pete Alonso has it in his hands.

Alonso captured his second straight Home Run Derby on Monday night, pounding out 74 home runs over three rounds of competition at Coors Field in Denver, Colorado, to reestablish himself as one of Major League Baseball’s elite power hitters and create a celebratory mood at Dove Tail Bats in Shirley where the slugger’s bats are made.

“We build close relationships with our guys, and we want them to know that they’re bringing us into Major League Baseball and making our entire team in Shirley part of what they do,” said Paul Lancisi, who owns Dove Tail Bats with his wife Theresa.

“We all take pride in this, from the guys in the mill to our shipping people to all of our sales staff to my wife communicating with the players. They’re part of the Dove Tail family and we’re part of their team family and the history they’re creating.”

Alonso, who also won the contest in 2019 before last year’s event was canceled due to COVID-19, defeated Trey Mancini of the Baltimore Orioles 23-22 in the final round, cracking home runs on the first six pitches thrown by Mets’ batting coach Dave Jauss during bonus time to surge past his remaining rival.

Both Alonso and Mancini slammed 17 home runs during their allotted 2 minutes in the finals, with each then earning an additional minute for hitting two of those homers more than 475 feet each.

His longest home run of the finals went 509 feet through the thin air of the Mile High City.

“It’s all in the wood, especially when you carry a big, hard piece of wood that comfortably,” Lancisi said. “That’s Pete Alonso.”

Alonso uses a 34-inch-long, 32-ounce bat made of yellow birch that is uncupped at its larger end to provide for a heavier swing rate, Lancisi said.

That the bat has proven successful for the 26-year-old Tampa, Florida, product known as the “Polar Bear” is reflected in his long-ball success. Lancisi is awaiting further validation about his company’s wooden-bat product line from testing being done at the University of Massachusetts Lowell to compare billets Dove Tail Bats uses for its bats and billets from wood from more southern Appalachian forests used by other bat makers.

Lancisi said preliminary results are promising for the Maine-grown hardwood.

“Once we have that certification, then we can blast it out with our marketing agency,” he added.

Alonso began using Dove Tail Bats in 2018 while still in the minors, and a year later he not only was promoted to the majors but won the Home Run Derby, was named National League Rookie of the Year and set a major-league rookie record with 53 home runs.

He is one of 11 major leaguers currently swinging Dove Tail Bats, in a business where many players are paid by larger companies to endorse their bats, smaller companies like Dove Tail Bats that don’t offer endorsement money must rely instead on the quality of their products to pay statistical dividends to the players who use them.

The company develops many of its player relationships in the minor leagues and at even younger levels as it works to develop brand loyalty it hopes will extend into the major leagues as is the case with Alonso.

“We’re about serving our players and giving them the best bats in the world,” said Lancisi, a former pitcher who had a tryout with the Boston Red Sox in 1982. “We’re looking for as much loyalty as they’re looking for. It’s a reciprocal relationship.”

Alonso has become more involved in product development with Dove Tail Bats in recent years, including the creation of a “Polar Bear” metal bat scheduled to hit the marketplace next month.

“We’ve built such a relationship with one another that when we go to Florida we can get together for lunch and talk fishing and life and then talk baseball,” Lancisi said.

Alonso, the only slugger in this year’s Home Run Derby back from the 2019 event, was seeded fifth in the eight-player competition based largely on the 17 home runs he has hit during the regular season to date — a stat that ranks him tied for 31st in the major leagues.

But he sent a loud message to the other competitors in the opening round with a record-setting 35 home runs in just 49 swings — with one blast traveling 514 feet and another at 502 feet.

Kansas City Royals catcher Salvador Perez answered with 28 homers, but like the rest of the field he could not keep pace with Alonso’s power.

Alonso was matched in the semifinals against Washington Nationals outfielder Juan Soto, who defeated top-seeded Shohei Ohtani of the Los Angeles Angels in a swing-off to advance.

Soto rapped 15 home runs, leaving Alonso a relatively easy mark to beat. He belted 14 home runs in the first 1:57 of his 3-minute round before calling timeout to encourage the fans to make noise. When he resumed batting, he needed just 15 more seconds to advance to the finals.