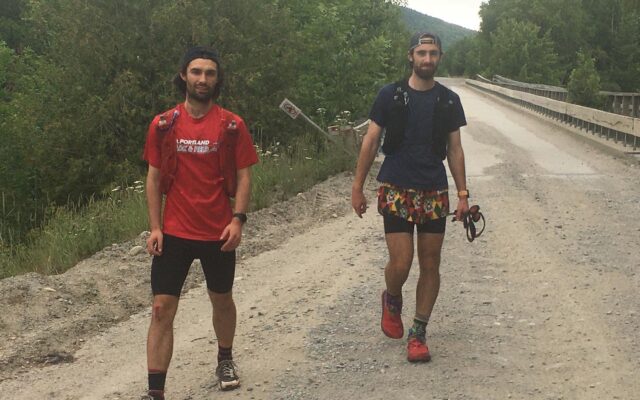 Contributed • July 11, 2021
By Pete Warner, Bangor Daily News StaffChildhood friends Will Peterson, Nik Hase and Xander Keiter have shared a lot of adventures together growing up in southern Maine. Recently, the men teamed up for an unprecedented challenge when they ran 96.

By Pete Warner, Bangor Daily News Staff
Childhood friends Will Peterson, Nik Hase and Xander Keiter have shared a lot of adventures together growing up in southern Maine.

Recently, the men teamed up for an unprecedented challenge when they ran 96.5 miles in a span of 34.5 hours, through Maine’s 100-Mile Wilderness along the Appalachian Trail.

Peterson, 22, is an avid hiker from Hollis who completed the Appalachian Trail in 2019. The 22-year-old Hase from Buxton has competed in an Ironman Triathlon. Keiter, 21, hails from South Portland and has done the Beach to Beacon 10K and likes trail running.

Last fall, a bold plan was set in motion to embrace a bigger test. They decided to attempt running 100 miles on established hiking trails.

“I said I’d do it if we found an interesting stretch of trail,” Peterson said.

Their choice was the 100-Mile Wilderness, the next-to-last segment of the Appalachian Trail that stretches from Monson to Abol Bridge on the Golden Road, abutting Baxter State Park. The trail actually measures 96.5 miles.

“I’ve done some other big trail stuff that was in the 50-to-60-mile-per-day range, so it seemed like the next logical progression,” Peterson said.

Keiter, a graduate of South Portland High, also was recruited to join the effort. They researched ultra marathon running and pieced together a detailed, six-month training schedule specifically geared to culminate in their run.

Their efforts were complicated by the fact all three were in college. Peterson attends Northeastern University and Xander was at Boston University, both in Boston, while Hase attended the University of Maine. One training challenge was finding conveniently located mountain terrain.

“We started out with 13- or 15-mile days and our biggest single day training was 45,” said Peterson, who is a senior neuroscience major, “but we had days later on in our training schedule we did back-to-back marathons (26.2-mile runs).”

They scheduled the run for June, after Keiter and Hase had graduated college and before Peterson began a six-month internship in Boston. The trio set out on their run at 7 a.m. on June 24.

Peterson had hiked the 100-Mile Wilderness twice before, while his buddies had not.

They passed a few northbound hikers on the final leg of their Appalachian Trail hikes and many others who were headed south.

“We were definitely the only ones running,” Peterson said.

Their route took them along the Appalachian Trail, through 40 miles of more difficult, mountainous terrain, then on to 60 miles of flatter trail. There was everything else in between, including rocky sections, areas with lots of tree roots, and even some small streams and rivers to negotiate.

The most significant of those was the west branch of the Pleasant River, where for the only time on their run the men were forced to remove their shoes and walk through the water.

“It was actually a big morale booster,” Peterson said of having the chance to cool their aching feet in the water.

Each of the men ran at his own pace for the most part, but the group accordioned back together every mile or so before continuing on together. The aim was to keep their legs moving for the 13 to 15 miles between resupply stops.

Eric Peterson, Eric Hase and Chris Keiter were waiting to give their sons whatever they needed. The dads had scouted out the route the previous weekend to make sure they could set up the strategically planned aid stations near road crossings.

“They’d set up chairs and make us some food and they’d fill up our water, essentially do whatever we needed them to do,” Peterson said.

The running speed of the group was determined by several factors, including the terrain and elevation, the time of day, injury and fatigue.

“You’re doing it as a group, so you’re only as fast as the slowest person and everyone has their problems at different times,” Peterson said.

Plus, none had ever run 100 miles on trails, which can spawn different stresses on the body because of the unpredictable and inconsistent nature of the trail.

Even Hase, who Peterson described as a really fit dude, wasn’t able to avoid significant issues.

“The entire bottom of his foot blistered up and bruised simultaneously,” Peterson said of the injuries, which he thought were likely the result of Hase’s lack of experience running on trails.

“Honestly, if [Hase] asked me at Mile 45 whether he was going to finish I would have said, ‘I don’t think so,’ but he’s relentless,” Peterson said.

The trio persevered in spite of the setback, taking only seven legitimate breaks during their journey, some as short as 10 or 15 minutes. The longest was 45 minutes.

They didn’t sleep during the entire 34.5-hour run.

“We use this nutrition powder that has caffeine built into it, so we are essentially slow-dripping ourselves caffeine throughout the entire thing,” Peterson said. “I really expected it to bother me more than it did.”

The men also faced the challenge of running the trails at night. It helped that most of the more difficult terrain was behind them by then, but darkness meant their pace slowed.

Each used two headlamps, one on the head and the other attached to their waist that was pointed at their feet.

“You don’t realize when you’re running on trails, especially, how much coordination comes from being able to see your feet,” Peterson said.

The group was boosted by the presence of Will Peterson’s friend, Theja Putta, who joined them for the last 40 miles.

“He was an incredible moral boost, especially during the longest hours of the night,” Peterson said.

Exhausted and sore, the men ran through the night and most of the day Friday. Their fathers waiting, they finally arrived at Abol Bridge in Millinocket at 5:30 p.m. on June 25.

“We were all absolutely wiped, although we definitely had a little extra shot of adrenaline at the end from finishing,” Peterson said.

They celebrated briefly by eating ice cream at the Abol Bridge Campground and Store before driving back to southern Maine.

“I slept for a couple hours and then actually ended up driving the last hour home because my dad was exhausted,” Peterson said.

Hase recovered, thanks in part to the efforts of his mother, who works for Maine Med. He is back doing some short hikes.

Keiter and Peterson are already looking ahead to the next big challenge. That might be trying to set the record for running the 100-Mile Wilderness.

The record for a supported runner or runners along the trail, according to fastestknowntime.com, is 30 hours, 22 minutes, 5 seconds and is held by Rob Erskine.

“We feel like we can go quite a bit faster, perhaps actually compete for the record, so we’re trying to decide,” Peterson said.