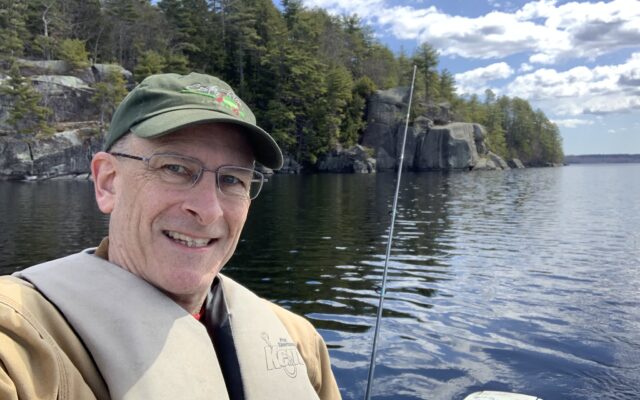 Writing about the Maine outdoors is an exciting and daunting task

Contributed • July 8, 2021
By Pete Warner, Bangor Daily News Staff After 40 years writing and editing sports, I am now heading afield as the Bangor Daily News outdoors editor. I am blessed, and humbled, to have the opportunity to hold one of the most coveted jobs in Maine journalism.

After 40 years writing and editing sports, I am now heading afield as the Bangor Daily News outdoors editor.

I am blessed, and humbled, to have the opportunity to hold one of the most coveted jobs in Maine journalism. It is a responsibility I do not take lightly.

I am following in the footsteps of three men who were committed to providing Mainers with the key hunting and fishing news of the day while entertaining with their storytelling talents.

It is an honor to join the company of legendary outdoors writer Bud Leavitt, gifted artist and outdoorsman Tom Hennessey and storyteller extraordinaire John Holyoke. It isn’t possible to imitate or replicate the amazing work they have done, but I hope at least to pursue their commitment to excellence.

The challenge, while daunting, is an exciting one.

Growing up in Maine, the outdoors is part of who you are.

I was fortunate to grow up fishing at our camp at Sebago Lake in Cumberland County. In my youth, we primarily targeted landlocked salmon and smallmouth bass. Sometimes, we would go night fishing for yellow perch — and whatever else might come along.

A few times, we ventured to the mysterious “smelt hole,” a deep spot where family members have gone for a century to fish for smelts and salmon.

During summer vacations, my sister Anne and I spent every waking hour in the water, on the rocky shoreline or exploring the woods.

Sebago has been the focal point of my outdoors pursuits. My paternal great-grandfather, Dr. William C. Kendall, started the tradition while studying landlocked salmon with the U.S. Bureau of Fisheries.

Kendall, a Freeport native who worked in Washington, D.C., started taking his family, including his daughter and my grandmother, Minerva Kendall, to Sebago Lake.

In 1907, he caught a 16-pound salmon that for many years ranked as the second largest ever to come out of the lake. That same year, Ed Blakeley’s 22-pound, 8-ounce monster set the world record, which stood for some 100 years.

From then on, you might say, our family was hooked.

In 2010, Kendall founded the Wawenock Camp for Boys which grew to include Camp Owaissa for girls. Camp Wawenock remains a fixture on Raymond Cape.

My uncle, Ken Warner, became a fisheries biologist and worked for the Maine Department of Inland Fisheries and Wildlife for an incredible 50 years. My dad, Bill Warner, was a sports journalist with the BDN for 36 years.

Dad was my fishing mentor and taught me to respect and protect the resource while enjoying time spent on the water. Long hours trolling in a 14-foot aluminum boat with him and Ken, whether on a chilly, breezy day in May, or a hot, steamy summer morning, are among my fondest memories.

I introduced my wife Annia and our sons, William and Paul, to fishing at Sebago. I also have spent time in the boat with several cousins while extending the family fishing tradition to five generations.

I didn’t take up hunting until 2006 after accompanying Holyoke and the Lander boys — Chris, Billy and Timmy — on a moose hunting expedition. That quickly opened the door to deer hunting, which has become a passion.

Learning the ways of the woods and the habits of whitetails has been enthralling. Even days with no deer sightings, turkeys unwilling to come into shotgun range, or rides along the gravel roads near Brassua Lake looking for grouse, but seeing none, are rewarding.

Usually, it’s the company of family and friends that makes those days special.

My hope is to take BDN Outdoors on many new adventures with you along for the ride.

Maine’s woods and waters are a huge classroom where there is much to learn about fish and wildlife, how creatures live and what we can do to make sure we have sustainable populations for everyone to enjoy.

We’ll talk with the scientists whose life work is to study and evaluate the factors, natural and manmade, that impact animal, fish and bird populations.

We’ll stand alongside outdoors enthusiasts as they cast into a river pool, paddle across a quiet pond, scour the landscape for moose, bounce along the Penobscot River in a rubber raft and traverse the woods on snowmobiles and all-terrain vehicles.

We’ll be in close contact with the Maine Department of Inland Fisheries and Wildlife and the Maine Warden Service. We’ll be in touch with legislators and members of key Maine conservation groups as they advocate for their respective causes.

We’ll visit hunting and fishing lodges, tag along with Registered Maine Guides, cast flies in a remote heritage trout water and maybe even do some rock climbing.

We’ll keep an eye on Atlantic salmon restoration efforts on Maine rivers, follow the effects of winter ticks on the moose population and guard against the looming threat of Chronic Wasting Disease impacting the state’s deer herd.

We’ll follow the initiatives to develop and protect deer wintering areas and native brook trout habitat, and we’ll track a growing black bear population that is likely to lead to more encounters with people.

Most importantly, I want this to be a collaborative process. If you have questions, please ask. If you have a great idea for a story, let me know. If you think I’ve missed the boat on something, tell me.

I want to write about the subject matter and key issues affecting Mainers in the hope of educating folks and creating constructive dialogue that can help us maintain vibrant and productive outdoors resources.

I’m honored and proud to be serving in this new role at the BDN. Let’s get out there and have some fun!

BDN Outdoors Editor Pete Warner can be reached at pwarner@bangordailynews.com or at 207-990-8240.