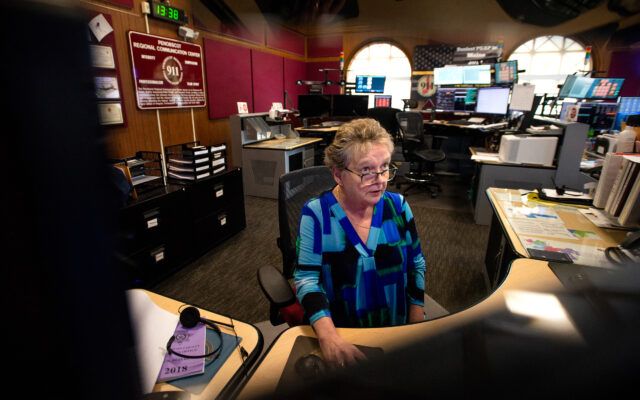 Contributed • July 5, 2021
By Judy Harrison, Bangor Daily News Staff When Elizabeth “Liz” Ryan began her nearly 40-year career as an emergency dispatcher in the early 1980s, she used a manual typewriter with a red and black ribbon, a landline telephone and a two-way radio to communicate with police officers, firefighters and ambulance drivers. Her last day on the job Friday, July 2  found her seated in front of multiple computer screens.

When Elizabeth “Liz” Ryan began her nearly 40-year career as an emergency dispatcher in the early 1980s, she used a manual typewriter with a red and black ribbon, a landline telephone and a two-way radio to communicate with police officers, firefighters and ambulance drivers.

Her last day on the job Friday, July 2  found her seated in front of multiple computer screens.

One screen shows where the person who dialed 911 is located. Another shows the number the call is coming from, where the phone is located or the location of the cell phone tower closest to that phone.

It’s not only the technology that has changed in the decades Ryan has been on the job. The number of calls dispatchers have received has risen as cell phones have become ubiquitous, and the nature of the emergencies has changed as well as the opioid epidemic has taken its toll.

A typewritten call log Ryan saved from her early years as a dispatcher illustrates some of these changes.

The log is typed in uppercase letters with the information from the incoming call typed in red and the response typed in black.

Calls on one shift included a report that a man was “STRANDED ON BLACKCAP MTN” and that a woman’s car was “OFF ROUTE#2 PALMEYER (sic) RD NEWPORT. SHE IS WAITING ON WRECKER.” A different woman called to ask what she should do “ABOUT HER DEAD BROTHERS TRUCK.”

Nowadays, the Penobscot Regional Communications Center might get multiple calls about the same car crash.

“Fifteen years ago, if you were in an accident on Wilson Street that wasn’t too serious, you’d go into the nearest business and ask them to report it,” she said. “Now, because of cell phones, we get multiple calls about a lot of accidents and incidents.”

Information shared on social media about ongoing emergencies, which can be inaccurate, has also proliferated, she said.

Her 32-year-old boss, Penobscot Regional Communications Center Director Christopher J. Lavoie, was not yet born when Ryan began working as a dispatcher.

Ryan can’t be replaced, he said.

“It takes a strong person who is caring, compassionate and a good team worker to be a dispatcher,” Lavoie said. “The average time a person works as a dispatcher is between three and seven years. The fact that she’s been doing this for close to 40 years speaks volumes about her abilities. She has every quality it takes to be a good dispatcher.”

Her first job in the summer of 1980 was working as “the token female police officer” in Bar Harbor, she said. That experience convinced her that she’d rather be on “the other side of the microphone.”

Ryan worked as a dispatcher for the Penobscot County Sheriff’s office for a year before going to work in Brewer, where she worked alone. She stayed there 15 years until the Penobscot Regional Communications Center was created in 1997.

Initially, the center dispatched for Brewer, Hampden and the county sheriff’s office. Today, it handles calls for nearly every municipality in the county except Bangor, which has its own dispatch operation. The center also takes initial calls from Aroostook County and forwards them to the appropriate agencies. More than 30 dispatchers at the center handle nearly 1,000 calls a day, according to its website.

“Every day is different. Every phone call is different,” Ryan said. “I’ve enjoyed the people I’ve worked with.”

In 1995, as a dispatcher for the Brewer Police Department, Ryan was asked what the toughest part of her job was for a profile in The Weekly.

“Probably feeling a sense of helplessness,” Ryan replied. “You’ve got emergency personnel going to the scene, but the lady’s on the phone, she’s older and has trouble breathing. Also, it’s hard when there’s children involved.”

She also said in 1995 that “shy of winning the Megabucks, I’d be doing the same job.”

Ryan stood by that statement in an interview the week before her retirement.

Ryan is among three Penobscot County employees who have retired over the past month.