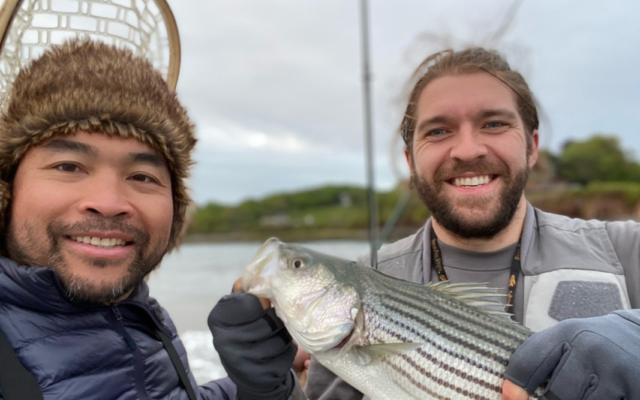 Stuart Hedstrom • June 22, 2021
Throughout the month of June anglers of all abilities are encouraged to cast for Fishing Across Maine, a fundraiser for Wayside Food Programs and to help end food insecurity across the state. Fishing Across Maine is another endeavor for organizer Truc Huynh to pay it forward after all the help he and his family experienced when they arrived in Maine from Vietnam three decades ago.

Throughout the month of June anglers of all abilities are encouraged to cast for Fishing Across Maine, a fundraiser for Wayside Food Programs and to help end food insecurity across the state.

Fishing Across Maine is another endeavor for organizer Truc Huynh to pay it forward after all the help he and his family experienced when they arrived in Maine from Vietnam three decades ago.

“The goal is to raise money for Wayside Food Programs to end food insecurity. It’s another topic that’s near and dear to my heart,” Huynh, who was 9 when he arrived in the U.S., said. “We obviously had very limited means growing up and I remember people helping us out. I remember school lunches were a big deal for me and my siblings, that was a chance to eat. So that’s why I am so passionate about Wayside Food Program’s mission.”

In 2019 Huynh started Trucking Across Maine and as he biked from Madawaska to Kittery to raise $16,000 for five charities.  In 2020, in partnership with American Roots, he redirected efforts to buy masks and PPE and donated the gear to area non-profits and first-responders.

Fishing Across Maine Huynh anglers, along with sponsors, are asked to make a donation and then enjoy the lakes, rivers and ocean. Huynh opted to extend the event from two weeks to the entire month.

“I figured just two weeks for fishing was very limited because a lot of people work during the week and really if I only did it from June 1 to June 13 they would only have two weekends,” he said.

“All anglers are welcome, whether you’re a beginner or you’re an expert,” he said. “Whether it’s river wading or lake fishing for perch or striper fishing, really any kind of fishing and all diversified groups and diversified experiences are welcome.”

“So far I think we have raised almost $10,000 for charity,” Huynh said, with about 100 sponsors contributing and more than a dozen participants having sent in photos of their catches.

“It was really born out of the first Trucking Across Maine trip,” he said about the idea as Huynh wanted to continue to give back after his family received help settling in their new home.

He said traveling from Madawaska to Kittery, “I learned so many things and met many people with different perspectives and really just got to know our state that much more. I felt like I grew up 30 years here in Maine and I still haven’t been to more than 60 percent of Maine yet.”

“When the pandemic hit, obviously everybody was affected by this in so many ways and some more than others,” Huynh said. “A lot of people lost a lot of things and the challenges that come along with this pandemic both from our personal lives and our professional lives so I really kind of felt helpless, I wanted to do something. We weren’t able to go and participate in many activities so I started redirecting some of my efforts to buying PPE and masks.”

“This year, since everything’s opening, I really wanted to do something active again so I thought of Fishing Across Maine because that’s my passion,” Huynh said. “I love fishing and it’s kind of poetic to go fishing and feed Wayside whose mission is to donate food back to communities and meals to people in need.”

Huynh said another friend is a board member for Wayside Food Programs. This friend helped Huynh get a vaccine appointment for his father at the same time as his mother.

“I thought what an amazing act of kindness from her and of the people who were administering vaccines at the time,” he said. Reading about Wayside Food Programs, Huynh quickly found an organization he wanted to support.

He said in addition to raising funds to help feed those in need, he wants Fishing Across Maine to allow people to share stories, get to know one another and break down stereotypes.

“Part of my goal is not only to get people active and explore Maine and different areas of Maine beyond just southern Maine but expand our horizons a little bit whether it is people, places or things like food,” Huynh said. “I think it can cross personal lines, cross racial lines. Whether you’re an immigrant or native born here. I think we can all learn from each other and I want to not only have fun but have discussion on what Wayside’s mission is and have some folks share a story from different areas of the state.”

A Zoom celebration is planned for all Fishing Across Maine participants with awards presented and raffle prizes drawn at 6 p.m. Wednesday, July 21. “We’re inviting them on to share stories of their catch. I want people to get together and get to know each other better through the medium of fishing and for an opportunity for Wayside to also tell everybody a little bit about their mission and what they do.”

Wayside Food Programs Executive Director Mary Zwolinski said funds raised through Fishing Across Maine will go toward the general operating fund, as is most commonly done with donations.

“I think what’s really fun about this one is it’s not ‘here’s a donation’ and then send us a letter — and we appreciate all our donations — this one is Truc really being creative and it sort of serves dual purposes,” she said. “It’s raising funds for Wayside but it’s getting people to get outside and enjoy Maine and have an adventure. So we really haven’t had any quite like this.”

The executive director thanked Huynh for his work, rather than simply writing a check and asking others to do likewise. “He’s very involved in it and it’s very much about engaging people and that’s who he is,” Zwolinski said. “He’s very outgoing and good at getting people to do stuff and this fits Truc’s personality perfectly.”

Wayside Food Programs’ service area is primarily Cumberland County, with some programs in York and Oxford counties, but the intent of Fishing Across Maine is to have participants be thinking about issues related to food insecurity where they live.

Zwolinski said hopefully anglers will be thinking “in a way they might not have before, they might have made a donation to the food bank but this gets them thinking about what else they might do and I think that’s inspirational.”