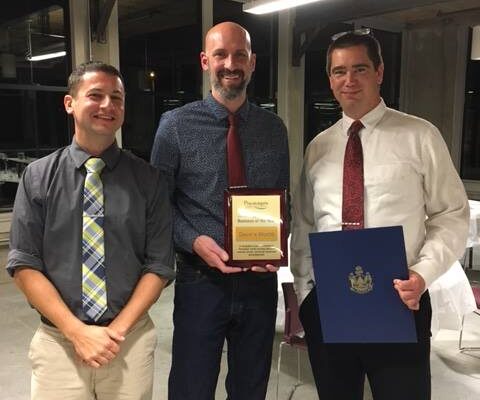 DOVER-FOXCROFT – Customers of Dave’s World will be seeing a few changes soon. The family-run business, known for selling heat pumps, appliances, flooring, mattresses and U.S. Cellular services, will be adding new owners and new locations within the next month or so.

Business partners Dan Sharrow, Robert Jankunas and Matthew Scott will retain ownership of Dave’s World’s four locations selling heat pumps across the state, and will be moving their Dover-Foxcroft location into the former Dover Auto Parts store at 27 Summer Street. The trio will also retain ownership and operation of the U.S. Cellular store.

David Sharrow and Jayne Sharrow bought the former Gellerson TV & Appliance building in 1985. The business was rebranded as Dave’s World in 1992. Jankunas and Dan Sharrow purchased the business in 2004, with Scott coming on as an equal partner in 2006.

“Bob and I grew up next door to each other on Spring Street,” said Sharrow. “He has been an employee for the longest – 30-plus years! It was my first job, driving delivery truck, but I moved away to Boston for five or six years, returning to the family business in 2002.”

Sharrow said the business had been listed for sale for about a year, “but we wanted to find people that would carry the business forward largely as it is, and keep the business in this community,” he said. “The impetus to change is that our heat pump business has seen explosive growth over the past 12 years and the three of us, well, it’s grown to the point that it’s all we can handle.”

Because there are three other Dave’s World locations in Ellsworth, Windham and Scarborough, the decision was made to retain the business name and focus on only the sale, installation and service of heat pumps at all four locations.

“The biggest point I want to make is that nothing is changing dramatically other than the name of the businesses,” Sharrow said. “There will still be the same level of sales and service.”

Business partners Rick Dill and Wade Shaefer took over ownership of the Mainely Rent to Own store in Lincoln in 2016. “We’ve been talking about expanding for a little while now, and last year, with COVID happening, we had a really good year, so we decided to start looking around. We found the business on a website for selling businesses in Maine, and contacted Dan. I believe all parties on both sides are very excited. This is the right time, and the right business that we want to acquire.”

Dill said that they studied market trends and were able to stock up on appliances before COVID-driven shortages hit some of the bigger box stores. “We scrambled to keep our customers happy,” he said.

“We’ve always been known for that hometown feel,” Dill continued. “That’s another reason why Dave’s World was so appealing to us. It was founded in the same way and has been in the family for years. We all kind of have the same business vibe. When we got together and talked it was like we had known each other for a long time. We are excited to keep that same hometown feel where everyone knows everyone.”

The new owners are planning to retain as many Dave’s World employees as would like to stay. “We don’t want to go in there and tell everyone, ‘Hey, new ownership, see you later,’” Dill said. “We believe the employees are a core part of what they do there, and they’ve been doing a great job, from what we’ve heard. These are the people that customers have been seeing for years and our goal is to do the best we can to keep everyone that would like to stick around.”

The new businesses were given two distinct names for several reasons; one being the potential expansion of @Home Kitchen & Bath to a second location in the future, Dill explained.

The biggest change customers can expect to see in the coming months is the addition of a full line of furniture. “We want to keep business local,” Dill said. “We will be adding many new, competitively priced products, such as sofas, recliners, bedrooms, dining room sets, and we will also be adding additional appliance brands, as well.”

Existing Dave’s World customers need not worry about getting appliances serviced, he assured. “We already have an appliance repair division that services practically the whole state and we are continuing that,” said Dill. “We don’t only service what we sell. We service all major brands, and we provide extended service coverage for several big box stores. We will be repairing anything that Dave’s World has sold. The repair side of our business has been growing faster than the retail side so we are looking to hire additional technicians in the near future, as well.”

All of the partners are hoping the ownership transactions can be completed by July 1. A celebratory event for both the new Dave’s World location and the two @Home stores will be planned for a future date.

In the meantime, Dill said, “We want to answer every question that customers have. We are always honest with customers, regardless of whether what’s happening is something bad or something good. We would welcome any questions customers have.”