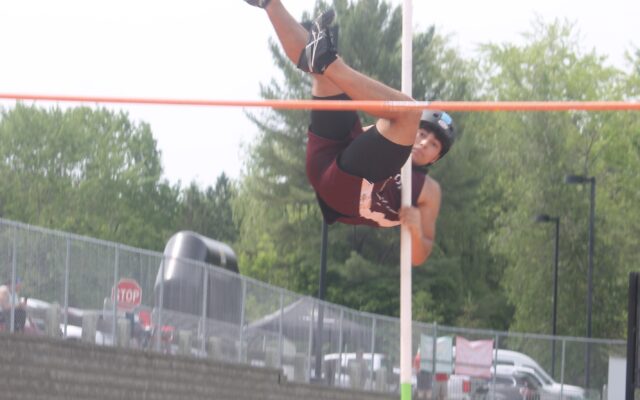 Stuart Hedstrom • June 7, 2021
BREWER — The Foxcroft Academy boys scored points in four events during the 2021 Class C Outdoor Track & Field Championship at the Brewer Community School on June 5. The Ponies finished the day with a score of 12.

BREWER — The Foxcroft Academy boys scored points in four events during the 2021 Class C Outdoor Track & Field Championship at the Brewer Community School on June 5. The Ponies finished the day with a score of 12.5 points, good for 17th place among 30 schools with athletes recording top seven finishes.

Smith tied Searsport District High School junior Thomas Bradley for eighth in the pole vault at a height of 8-06 each.

Among the area high schools, Greenville High School had the next highest finish. The Lakers’ eight points put the team in a tie for 24th place with Boothbay Region High School.

Greenville senior Matt Snyder scored all eight of his team’s points with his second-place throw in the discus. Snyder had a top throw measuring 137-06, just two inches behind state champion Jared Martin of Monmouth Academy.

Classmate Andrew Pierce was 21st in the discus with his throw of 71-09.

A fourth-place throw by senior Isaac Webber in the javelin gave Dexter Regional High School four points and a 28th place finish. Webber’s throw landed at a distance of 138-06.

Bucksport High School won the Class C championship, the program’s first since 2004 and second overall, with 75 points. Traip Academy of Kittery placed second with 56 points and Washington Academy of East Machias was third with 51 points.

In the girls’ meet, Piscataquis Community High School had the highest finish among the five high schools in the region. The Pirates had three points to tie Dirigo High School of Dixfield and Traip for 22nd place among 31 girls teams recording points on June 5.

The Pirate 4×100 relay finished 15th in a time of 58.03 seconds. The team was made up of Fanjoy, sophomore Kendall Kimball, sophomore Samantha Goodwin and Sipple.

For the Dexter girls, sophomore Lauryn Brunner tied for 12th in the high jump with Houlton High School/Greater Houlton Christian Academy senior Emmalyne Drake. Bunner and Drake both jumped a height of 4-06.

Foxcroft Academy was represented at the state meet by its 4×100 relay team Junior Rebekah Demers, freshman Paige Weidman and sophomores Cadence Herrick and Emma Ladd combined for a time of 58.66 seconds, good for 17th place.

The cooperative program from Lisbon High School and Oak Hill High School of Wales won the girls’ championship with a score of 113 points. Winslow High School came in second at 90 and Bucksport was third with 56.33 points.