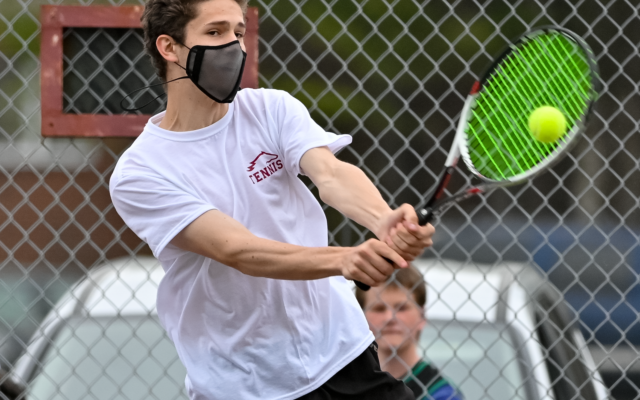 Contributed • May 24, 2021
By Ernie Clark, Bangor Daily News Staff LEWISTON — Caleb Fockens’ bid to become the first player north of Augusta to capture the state schoolboy tennis singles championship in 15 years fell just short Monday afternoon. The fourth-seeded senior from Foxcroft Academy in Dover-Foxcroft won the first set of the title match, but second-seeded George Cutone, a freshman from Kennebunk, rallied to win a second-set tiebreaker and went on to a 5-7, 7-6 (7-5), 6-1 victory in a 2.

The fourth-seeded senior from Foxcroft Academy in Dover-Foxcroft won the first set of the title match, but second-seeded George Cutone, a freshman from Kennebunk, rallied to win a second-set tiebreaker and went on to a 5-7, 7-6 (7-5), 6-1 victory in a 2.5-hour battle at Lewiston High School.

“George was going to be a tough out no matter what,” Foxcroft coach Ryan Dankert said. “He wasn’t going to beat himself. Caleb had to earn everything he got, and George’s athleticism, his quick feet and quick hands, may have ended up being the difference.”

It was quite a day for first-year high school student-athletes on the courts, as top-seeded Sofia Mavor of Yarmouth defeated No. 3 Morgan Warner of Portland’s Waynflete School, 6-4, 6-0 in the girls final.

Cutone and Fockens were the dominant players on the tournament’s 52-player boys draw.

Cutone had not dropped a single game in his previous tournament matches, including a 6-0, 6-0 semifinal victory over No. 3 Ben Adey of Waynflete earlier Monday.

Fockens had yielded just four games leading up to the championship, including his 6-3, 6-0 semifinal win over top-seeded Leif Boddie, a junior from Greely High School in Cumberland Center.

Fockens won a back-and-forth first set in the final 7-5, then Cutone jumped out to a 5-1 lead in the second set before Fockens won the next five games for a 6-5 lead, leaving him one game from winning the title.

This time Cutone rallied, holding serve to win the next game and force a tiebreaker.

“I wasn’t able to capitalize on the momentum a lot of the times [in the final], which just shows that I haven’t had as much tournament experience recently,” Fockens said.

He was bidding to become the first northern Maine player to capture the state boys singles title since Hampden Academy’s Eliot Potvin won back-to-back championships in 2005 and 2006.

“And not necessarily with the mental piece, because I think I was OK on that point, but in just being able to close things out.”

Cutone took a 3-1 lead in the tiebreak, then Fockens won two straight points to forge a 3-3 tie as the players swapped ends of the court.

Cutone moved back out to a 6-4 lead, and Fockens fought off one set point before Cutone won the next point to force a deciding third set that Cutone won comfortably after breaking Fockens’ serve twice in the first three games.

“I tried to keep it competitive,” Fockens said of the final set, “but honestly he was significantly more athletic than me and had a lot more training than me over the past couple of months or so.

“He was a great kid as well as a great player. His game was very good.”

Fockens and his family moved to the small Somerset County town of Cambridge during the summer of 2019 from Greenwich, Connecticut. There, he had reached the Round of 16 in that state’s large-school singles tournament as a freshman and advanced to the quarterfinals as a sophomore, along with playing on the regional junior tennis circuit.

Fockens enrolled at Foxcroft at the start of his junior year, but did not play for the Ponies in 2020 due to the outbreak of COVID-19. He played limited tennis in Maine until this spring.

“Honestly it was just fun to be back in a tournament setting, to go out and get that experience again,” Fockens said. “It’s been a while.

“It might have hurt me that I didn’t have quite as much competition before the tournament, but just being able to hit against some of these really competitive kids in a genuine tournament setting has been an absolute blast.”

Fockens and Boddie played to a 2-2 tie early in the first set of their semifinal before Fockens won 10 of the next 11 games to advance.

Fockens reached the semifinals while losing just one game in three matches. He topped Aiden Hendry of Falmouth 6-0, 6-0, in Friday’s Round of 32, then on Saturday defeated Lukas Hradecky of Windham 6-0, 6-0 in the Round of 16 and No. 5 Dawson Turcotte of Skowhegan 6-1, 6-0 in the quarterfinals.

“I had a lot of fun over the weekend,” Fockens said. “I’m sure I’ll probably be upset about the final, but at the end of the day that’s the game and it was still a great experience.”