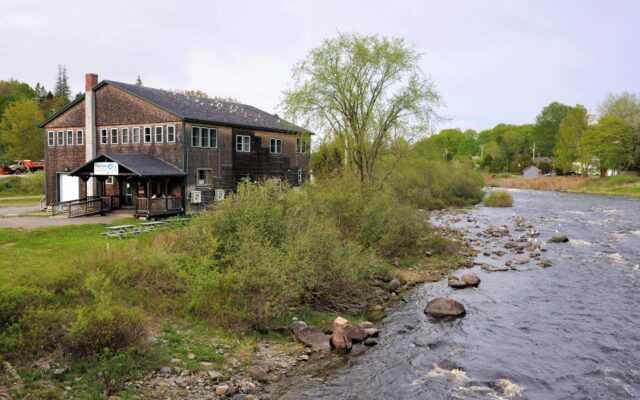 Eating too many Maine freshwater fish can cause mercury poisoning

Contributed • May 23, 2021
By Julia Bayly, Bangor Daily News Staff While Maine’s lakes, rivers and streams are home to some great freshwater fishing, they are also contaminated with dangerous levels of toxic mercury. Fish caught in those waters can be a health danger to those eating them — and that’s why Maine officials warn that eating too much freshwater fish can be a bad thing.

While Maine’s lakes, rivers and streams are home to some great freshwater fishing, they are also contaminated with dangerous levels of toxic mercury. Fish caught in those waters can be a health danger to those eating them — and that’s why Maine officials warn that eating too much freshwater fish can be a bad thing.

Those fishing on Maine’s inland waters may be familiar with the fish consumption advisory that has been in place for nearly 30 years — since 1994. It warns that fish from those waters should be consumed in limited portions. Some species may even be completely unsafe for some people.

Here’s what you need to know.

Mercury is a naturally occurring toxic chemical element found in rock in the earth’s crust, including in deposits of coal. It can exist in several forms as a liquid or a gas. It is released into the environment naturally from volcanic eruptions, forest fires, saltwater evaporation and even the weathering of rocks. It is also emitted into the air through burning of fossil fuels, including from power plants in the midwest that burn coal.

When mercury is released into air it can travel hundreds of miles by wind before it gets deposited back on land. It can then be carried by rain or snowmelt into lakes, streams, rivers and other waterways.

The most toxic form of mercury is methylmercury, which forms naturally when mercury combines with carbon in soil and water. It’s methylmercury that finds its way into the food chain, including freshwater fish species.

Methylmercury can remain in soil or water for decades. In fact, in all its forms mercury never really goes away — it just moves around in air currents, water flow, through evaporation or in the tissues of freshwater fish where it can accumulate to levels very harmful to humans when eaten.

Specifically, Maine’s fish advisory recommends pregnant and nursing people, those who may get pregnant, and children under the age of 8 years old eat only one meal of brook trout or landlocked salmon per month and should never eat any other freshwater species from Maine’s inland waters at all.

All other adults and children over the age of 8 years old can safely eat one meal of salmon or trout a week and for the rest of the freshwater species, meals per month.

Addressing the ongoing health and environmental issues when it comes to eating freshwater fish in Maine is a bit of a balancing act, according to health officials.

“Fish consumption advisories pose a public health conundrum,” said Andrew Smith, state toxicologist with the Maine Center for Disease Control and Prevention, the lead agency responsible for issuing the advisories. “On the one hand there is good evidence that a diet that regularly includes fish has health benefits but some species from some waters have elevated levels of contaminants that may pose a health concern.”

The goal of Maine’s fish advisories, Smith said, is educating anglers on which fish species tend to have lower mercury levels and are thus healthier options for eating. Fish like salmon and trout are a bit safer to eat because they live in colder waters, which tend to have lower mercury concentrations. Fish like pickerel and perch, on the other hand, live in warmer water where higher levels of mercury are found; thus, these fish can contain a higher concentration of mercury.

When people eat mercury-contaminated fish, it gets absorbed in the body and is then widely distributed among the organs, according to Dr. Kristopher O’Connell, primary care physician at Northern Lights Primary Care in Hampden.

“Mercury can cause deterioration of nerve cells which can cause strokes or neuropathy,” O’Connell said. “It can also damage cells in our lungs and kidneys and cause disease in our vascular systems.”

It is of particular concern to fetuses and babies, who can be exposed to the mercury in utero or via human milk, according to O’Connell. Mercury exposure for fetuses and babies can lead to low birth weight, seizure disorders, developmental delays, vision loss and hearing loss.

Like in the environment, mercury can stay in the human body for a very long time. According to O’Connell, it can take up to six months to completely excrete mercury through the bowels or bladder. He noted that studies have suggested it can stay in the brain for more than 20 years.

There are some medications that can help mitigate the health effects, but those become less effective the longer the exposure has gone on. According to O’Connell, the best thing to do is limit or avoid exposure all together.

According to Smith, there is a longstanding collaborative relationship among several Maine agencies when it comes to fresh fish consumption advisories. The Maine CDC, Department of Environmental Protection and Maine Department of Inland Fisheries and Wildlife all have a hand in collecting, analyzing and tracking data, in addition to getting the word out to anglers.

“The New England states have been concerned about this for a while,” said Andy Johnson, director of the air quality assessment division at the Maine DEP. “It is such a persistent and toxic compound.”

Johnson said the Maine DEP has been tracking the deposition of mercury from the atmosphere into Maine’s terrestrial ecosystems for around 25 years.

Once it’s in the water, mercury is tracked by DEP’s lake assessment division, according to Linda Bacon, a DEP assessment section leader.

“Mercury is one of those legacy pollutants that takes a long time to stop from getting into the food chain,” Bacon said. “It gets picked up in tiny amounts and eventually gets into a lake in low concentrations, but as it moves up the food chain it gets more concentrated at each step.”

No changes are anticipated soon

Officials are continually monitoring mercury in Maine’s waters and update the statewide mercury fish consumption advisory whenever necessary. It was last updated in 2000. Smith does not see any indication it will be lifted or modified any time soon.

“It appears that data on mercury levels in fish from Maine lakes and streams are relatively unchanged from 2000,” Smith said. “And at present the U.S. EPA’s toxicity value for methylmercury remains the same as it was in 2000.”

Bacon said the last major survey her division completed was in 2010 to 2013 in lakes that had been sampled 10 years prior to that to see if there were any changes or noticeable trends in mercury levels.

“What we saw from that work was some lakes’ levels went up, and some went down,” Bacon said. “So for the most part on a statewide scale, there was no big change.”

Johnson said that in 2015 data did show a slight decrease in the concentration of mercury in the atmosphere, but overall deposition of mercury had increased. He said climate change is being looked at as a driving factor in the increase of mercury deposition.

“We are seeing more precipitation,” Johnson said. “More water falling from the sky means more mercury being delivered than in the past.”

Out west, a lack of precipitation has contributed to major wildfire events. It might seem far away, but mercury-containing smoke from those fires has drifted all the way to Maine, Johnson said.

Climate change is also contributing to melting ice in arctic regions and a thaw in the permafrost, which contains levels of mercury.

“There is no immediate threat to Maine from mercury found in arctic latitudes,” Johnson said. “But it’s happening and it eventually could find its way to Maine.”

Johnson said work is currently underway to collect updated data on atmospheric mercury coming into Maine. He said a report based on that data could be available by the end of this year.

There may come a time when fish consumption advisories are no longer needed in Maine. Bacon, however, is not optimistic.

“At some point the mercury that has fallen onto Maine becomes less and less available and accessible to the food chain,” Bacon said. “But that is a very, very slow recovery process and I don’t know if my kids will live to see it.”