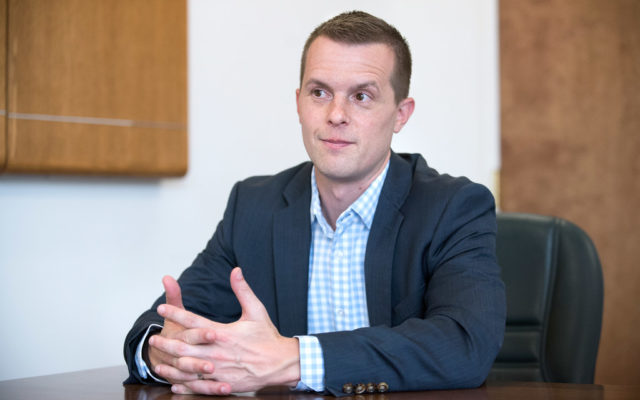 Hardly six months have gone by since Election Day, but corporate interests are once again flooding our TV screens with misleading, negative political ads. This time it’s the pharmaceutical companies and their allies, who are spending hundreds of thousands of dollars to warn you about a “socialist drug takeover” or American drugs “marching straight through Beijing.” In the ads, a dark and ominous voice tells you there’s a dangerous plan to seize the drug market and that you should call on me, your congressman in the 2nd District, to oppose it.

It’s not the first time Big Pharma has used these scare tactics. Drug companies have grown used to year after year of sky-high profits while they jack up the price of medications like insulin on working Americans. These companies have a good thing going, and they want to protect it. That’s why they spend millions every year to lobby Congress and stage massive advertising campaigns designed to scare, mislead and distract Americans from the fact that their prescription prices keep going up and up, just like drug company profits.

So with that in mind, let’s pull back the curtain and see what’s really behind these TV ads.

The legislation these dark money ads are attacking is H.R. 3, the Elijah Cummings Lower Drug Costs Now Act. The bill is designed to make good on a promise Republicans and Democrats have made to their constituents: lower the cost of prescription drugs for regular Americans.

H.R. 3 has two main provisions. The first one allows Medicare to negotiate down the costs of prescription drugs for the nation’s more than 61 million seniors and other Medicare beneficiaries — something the VA already does for our veterans — and makes those new low prices available to all insured patients. This provision alone is expected to reduce prescription costs for patients by up to 55 percent and save taxpayers $456 billion.

The second major provision in H.R. 3 places a $2,000 per year cap on out-of-pocket prescription drug costs for seniors. At a time when 1 in 4 Americans’ prescriptions are unaffordable and nearly 1 in 3 Americans report not taking their prescriptions as prescribed because of the cost, this is a measure that is sorely needed, and would help save taxpayers tens of billions of dollars.

These measures are common sense and broadly popular. No one who’s being honest seriously believes H.R. 3 is a socialist plot to outsource prescription drug manufacturing to China.

But if this bill has broad support and has the potential to do so much good, why didn’t it pass last Congress? The answer is simple: money. Lots of it.

The misleading ads running in our district are also running all over the country. They are funded by a dark money group called the American Action Network that takes dollars and direction from a slew of corporations, but one of its biggest donors by far is the pharmaceutical industry. Big Pharma has already spent at least $16 million on the group that we know of. The real number may be much higher.

Pharmaceutical companies dump this money into dark money groups, lobbyists and ad campaigns because these millions pale in comparison to tens of billions the companies reap in profits every year. As millions of Americans scrape by to afford the ever-rising cost of their insulin or cancer medication, the 35 biggest drug companies took home a combined profit of $8.6 trillion between 2008 and 2018. Times are good for big pharma — really good — and they’re willing to spend big to keep it that way.

Big pharmaceutical companies’ greed stands in the way of progress to lower prescription drug prices. It’s one of the biggest reasons I think it’s so important that we get dark money out of politics, ban corporate PACs and overturn the Citizens United decision that allows this kind of political spending in the first place. But as we work toward those goals, we must continue to call out special interests’ dark money influence and refuse to be intimidated or fooled by their misleading TV ads.