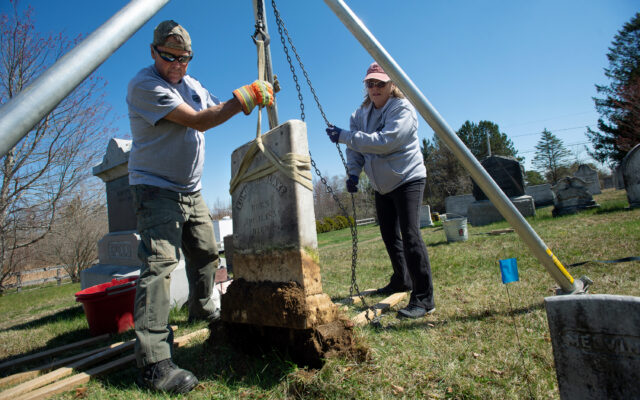 With a nod to the past, a Charleston couple preserves gravestones and maintains historic cemeteries

Contributed • April 30, 2021
By Abigail Curtis, Bangor Daily News Staff STOCKTON SPRINGS — Before Stu Kallgren and Sue Dunham started coming to the historic Mount Recluse Cemetery on Cape Jellison in Stockton Springs to repair and clean old gravestones, it was something of a mess. Some stones were in pieces on the ground.

STOCKTON SPRINGS — Before Stu Kallgren and Sue Dunham started coming to the historic Mount Recluse Cemetery on Cape Jellison in Stockton Springs to repair and clean old gravestones, it was something of a mess.

Some stones were in pieces on the ground. Others were buried underground, and lots had been blackened by time.

“The cemetery went through a period of profound neglect,” Charlie Smith, the chairman of the Stockton Springs Cemetery Committee, said. “The town didn’t have money. Now, we appropriate $4,000 a year. It may seem modest, but we’re making progress every year.”

That progress is thanks to Kallgren and Dunham, a Charleston couple who take care of neglected gravestones and cemeteries through their business, Maine Gravesite Maintenance.

Piecing together broken gravestones, cleaning timeworn ones and straightening crooked ones requires lots of hard work. But there’s an element of wonder, too. That was clear this week as the couple worked at Mount Recluse.

As Dunham, 70, scrubbed at time-darkened and lichen-covered gravestones with water and a soft brush, the almost illegible words that had been carved into the stones generations ago began to come into focus.

Later, Kallgren, 68, readied a tripod and chains so the duo could haul a half-buried headstone out of the ground so it could be placed on a new base and made completely visible again.

As they pulled, the lower half of the heavy stone slowly came out of the sod and hung in the air, likely the first time it had been exposed to sunlight and was fully visible in generations. It belonged to Edwin Blake, who was born in 1854 and died in 1889. The single word “husband” was carved at the very top.

“You never know what you’re going to find when you start digging,” Kallgren said.

In a way, that’s how they started their business. It all began several years ago when Dunham, a long-time paralegal in Bangor, got curious about her family’s genealogy. She found her great-grandmother’s gravestone at the Riverview Cemetery in Bucksport. It was a big granite stone that was covered with lichens.

“I thought, this really needs to be cleaned, but I don’t know how to do it,” Dunham said.

She went home and researched it, learning that harsh soaps, salts, acids and pressure-washing are to be avoided at all cost because they can damage the stones. Instead, experts use D/2 Biological Solution, a commercial cleaner which was developed by conservators. The gentle solution cleans mold, lichens, mildew, moss and more from marble, granite and other architectural surfaces, and is used by the National Park Service and the Department of Veterans Affairs to maintain cemeteries and monuments.

Dunham and Kallgren ordered some of the solution and got to work on her great-grandmother’s stone.

They continued on their quest to spruce up family gravestones, but ran into a problem when they tackled her great-grandfather’s pedestal stone. As they crouched around it, scrubbing with their brushes, they dislodged the stacked stone foundation it sat on.

“When we left, it was leaning severely,” she said. “I panicked. I had to do something.”

She called monument companies throughout Penobscot and Hancock counties, and couldn’t find anyone who would take on the task of straightening the stone — or who showed up when they said they would. So she and Kallgren decided to learn how to do repair and maintenance correctly, so they could fix it themselves.

They used their vacation time to go to Connecticut and study under Jonathan Appell, a stone conservation and restoration expert. It was physically challenging work, but they liked it enough that Kallgren, who had worked for 46 years in the papermaking industry, thought it would make a good retirement job.

It has been, they said.

Since 2016, when they began the business, they have worked in cemeteries in 43 towns in 13 counties across the state. They are hired to do jobs as small as cleaning and repairing a single headstone, or as large as getting hired by a town to repair stones in an entire cemetery, like they have been at Mount Recluse Cemetery.

The Stockton Springs cemetery is a peaceful place, with a carpet of magenta phlox that spreads over the grass in the springtime. There are Revolutionary War soldiers buried there, and Civil War soldiers, too. Many of the stones belong to ship captains and their family members, and more than a few list the names of those who were lost at sea.

One notable person buried in the cemetery is Paul Revere’s cousin, Robert Hichborn, who took part in the Boston Tea Party before settling on Cape Jellison. Another is Captain Daniel Dickey, a sea captain who served in the 19th Maine Infantry Regiment during the Civil War and was wounded at Gettysburg. His granddaughter, Clara Blanchard Dickey, was born at sea to seafaring parents and grew up to be an actress. She played Auntie Em in the 1939 motion picture “The Wizard of Oz” under her stage name, Clara Blandick.

Preserving the stories behind the gravestones are one reason why Kallgren and Dunham do the work.

“They say a person dies twice — once when their body perishes, and again when no one says their name out loud,” Dunham said. “I always say their names. As a matter of fact, sometimes I talk to them. You wonder what their lives were like.”

Hazards of working in cemeteries include ticks, body aches and pains from lifting the heavy stones and the occasional drug deal that they have interrupted (they call the police when they spot drug deals happening).

But the benefits outweigh the hazards, they said, recounting the time last spring when they were called to Lincoln to clean the vandalized gravestone of U.S. Army veteran Gary Gordon.

Gordon, who sacrificed his life to protect a downed helicopter pilot in Mogadishu in 1993, had been posthumously awarded the Medal of Honor for his bravery. His actions were the basis of the book and movie, “Black Hawk Down.”

“Some people went in and spray painted gold paint on his headstone,” Dunham said.

Three days before Memorial Day, town officials called them “in a panic.” She and Kallgren were able to get the paint off in time for the holiday, and afterward received lots of calls of appreciation from other Special Forces veterans located around the world.

“It was so emotional,” she said. “Everytime they called, we cried.”

That’s just one example of the way that the work doesn’t feel like an ordinary job to either of them.

“Knowing that I’m making a difference is nice,” Kallgren said. “It’s a good feeling to do something good.”