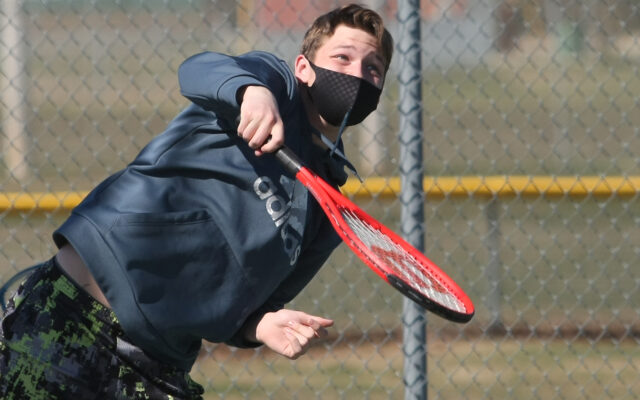 High school tennis tournaments to be held in Lewiston this year

Contributed • April 28, 2021
By Ernie Clark, Bangor Daily News Staff The road to the 2021 high school tennis state championships will go through Lewiston High School. That might not come as a big surprise, given the fact the Blue Devils won the most recent Class A girls state championship in 2019 and Lewiston’s boys and girls squads have combined to capture 17 state crowns and 24 regional titles since the turn of the century.

The road to the 2021 high school tennis state championships will go through Lewiston High School.

That might not come as a big surprise, given the fact the Blue Devils won the most recent Class A girls state championship in 2019 and Lewiston’s boys and girls squads have combined to capture 17 state crowns and 24 regional titles since the turn of the century.

But in this instance, that statement is more about location. The Maine Principals’ Association State Singles Tournament and the team regional finals and state championship matches all will be played at Lewiston’s eight-court tennis complex.

Many of these events traditionally have been played at college facilities, but those sites have not been made available for interscholastic events during the COVID-19 pandemic.

“[Athletic Administrator] Jason Fuller at Lewiston High School has been so welcoming and they have a great tennis facility,” MPA Assistant Executive Director Mike Bisson said.

“And the courts are spread out so that people can get around and see the kids and hopefully stay socially distanced a little better than if the courts were all together. We think it’s probably the best setup.”

Lewiston’s courts also have lights, which may come into play during the early stages of the singles tournament. That event begins with the Rounds of 52 and 32 on May 21, followed by the Round of 16 and quarterfinals on May 22 and the semifinals and finals on May 24.

“We ran into a situation a couple of years ago when we held the singles tournament at Deering Oaks in Portland and ran into darkness issues that Friday night,” Bisson said. “We had to carry over some matches to Saturday morning before we started the next round, so we made the decision to try to play under the lights at least Friday and Saturday if we needed to this year.”

Other changes in the singles tournament this year include the expansion of the boys and girls field for state play from 48 to 52 players.

That move, scheduled to begin in 2020, adds one more qualifier in Regions 1 (North), 2 (East), 3 (Central) and 5 (South). The Round of 52 now will consist of five qualifiers from the North, 12 from the East, nine from the Central region, eight from the West and 18 from the South.

Qualifying rounds in each region are scheduled for Saturday, May 8.

For the first time in several years, the singles tournament will not conflict with the Memorial Day weekend. This year’s expansion of the state team playoffs into an open tournament format was done to address the potential for regular-season match cancellations due to COVID-19 cases that force teams into quarantine.

One region, Class C North, has more than 16 teams. If all choose to participate in the tournament, an extra round of postseason play would be required to get down to 16 schools.

That division’s playdown round is scheduled for May 28, followed by the Round of 16 in all divisions on June 1.

Under the traditional postseason schedule, the singles tournament would conclude on Memorial Day, May 31, but if singles play that weekend was pushed back due to inclement weather, it would create a scheduling crunch on both singles and team play slated for the following Tuesday.

“So the committee felt, ‘Let’s play the singles tournament the weekend before,’” Bisson said.

Another change that could affect the postseason tennis schedule is the MPA’s decision to postpone rained-out matches until the next available date rather than moving play indoors.

That decision stemmed from financial considerations, given that the MPA’s primary revenue-producing events — the high school basketball tournament and state football and cheering championships — were either canceled or held virtually since the pandemic arrived.

“We normally reserve indoor courts for six days whether we use them or not,” Bisson said. “Apex [Racket and Fitness in Portland] has been great to work with and they’ve had a set rate for us that’s discounted if the days are reserved in advance and they don’t rent out any time.

“But we don’t have the money this year to reserve time that we may not use.”

State team regional quarterfinals are scheduled for the home courts of the higher seeds on June 3, followed by semifinals on June 5. The scene shifts to Lewiston High School for the North championships in Classes A, B and C on June 8, with the South championships the next day.

The state finals are set for Saturday, June 12.